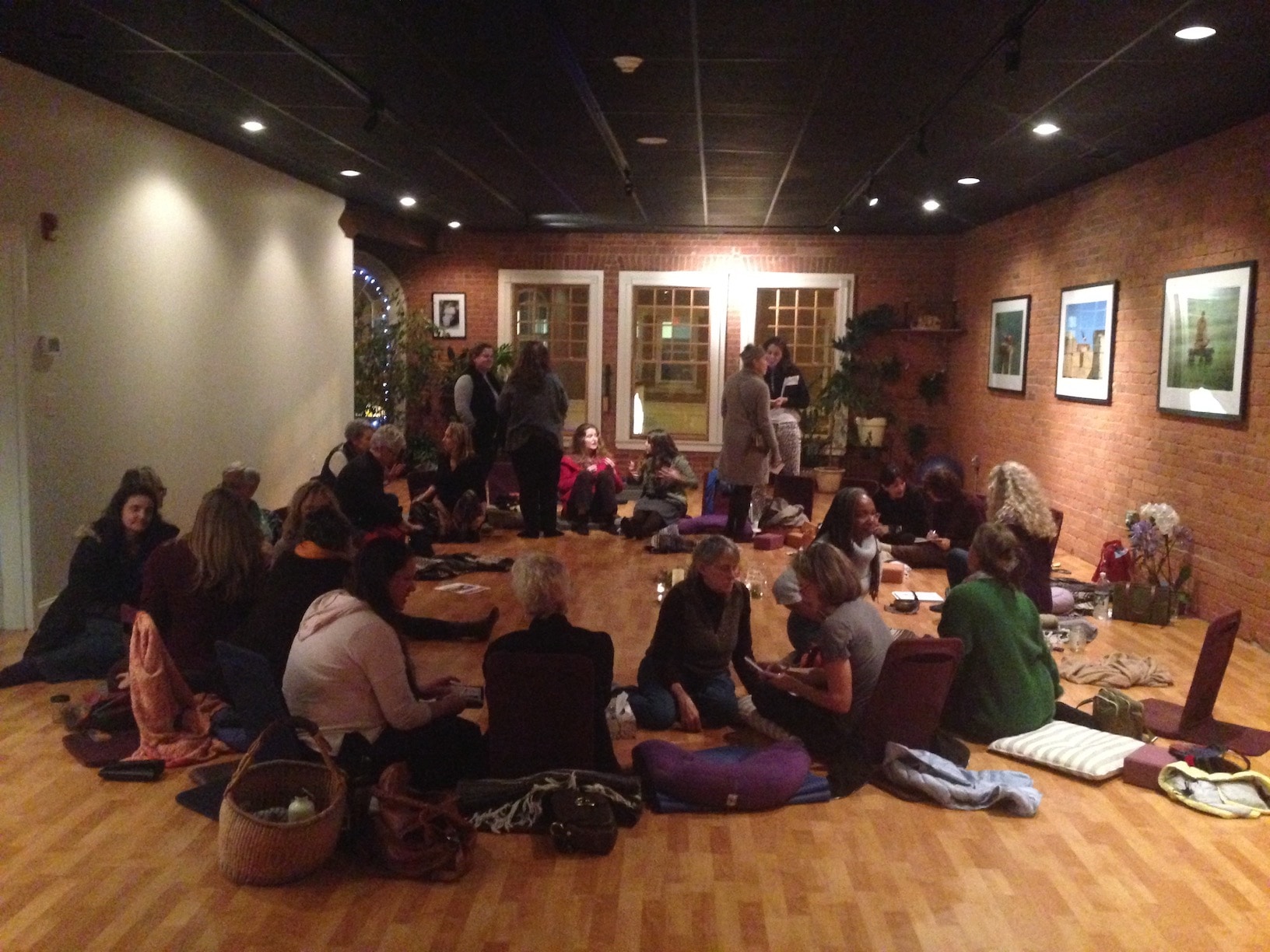 Last week I wrote about my own experience with Walking Our Talk, a women’s group. I thought I’d share with you more about WOT’s co-founders and some of the members. Please note that prior to COVID-19, WOT held meetings in person. However, all that changed due to the pandemic and meetings are currently held via Zoom. Because of this new way of meeting, members are not only from Berkshire County, but other places as well.

WOT was created by two women: Maia Conty and Mary Campbell. Originally Mary had started WOT as a loosely organized women’s group without a facilitator that focused on working on self-directed projects. Wanting more organization for the group, Mary sought out the help of Maia, her life coach, in anticipation that the two of them could organize a structured group with written agreements. These agreements would become the foundation that holds together the principles of the WOT group, or what is referred to as “circle.” Some examples of agreements are the role of confidentiality, committed presence, cultivating empowerment, taking responsibility and self-love. Members learn from the agreements a different culture of caring, which provides an environment of honor, honesty and respect that results in a sense of well-being. According to Mary, “Everyone is seen at their highest and we commit to recognizing that.” Deborah DeMarche Carusone of Ridgefield, Connecticut, who is part of the programming staff said, “Living by the agreements becomes an effortless process with the recognition it is a better way of living; subsequently leading to many of us using them outside of circle.” She also said, “It is almost magical the transformation that is made in circle as sisters interact with each other within the agreements.”

Based on the idea of traditional tribal practices to foster well-being in the community, WOT women sit together in a circle where the health and well-being of each other is validated. All women are welcomed to sit in circle, and many come for different reasons and from all walks of life. No one is turned away because of age, race, religion, educational background or economic status. The circle is a safe place where, for eight weeks, approximately 10-12 women gather in a room (pre-pandemic) or a virtual venue (during pandemic), knowing they belong to a sisterhood that does not judge and is loving, accepting and trustworthy. Ultimately, the circle is a place where women can be authentic, which results in a deep connectedness. Mary said, “The circle is a good connection, allowing vulnerability.” She also said, “The circle provides a community where no one has to isolate or be alone.” Thus, WOT’’s belief is personal growth happens best with the support of a community. Maia added, “It is an incredible place to improve health and well-being, as it promotes individual and collective empowerment.”

The structure of circle consists of how members practice the WOT agreements. WOT is proud of the way circles are structured and gets positive feedback from members. Circles are more structured than most women’s groups because it is the belief that members are happiest when meetings have guidelines to adhere to. WOT women find that structure provides a safety net so they can get help in their lives, find meaning with unresolved feelings and, through new companionships, obtain validation, which results in personal growth. Because of the way the circle is structured, everyone gets a turn to share. There is no cross talk, advice giving or interruptions.

Ina Hoffman of Lenox found the two WOT sessions she attended helped her be more at ease and not to take herself so seriously. Ina lost her husband recently, and with the COVID-19 outbreak, it has been an extremely difficult time. Having personal contact, which might help her with grieving, does not exist. However, Ina said, “Even though Zoom has limitations, it has given opportunity to mix with different WOT women with diverse background which has been helpful.” She also added, “I have learned a great deal from WOT on how to listen better and truly hear.”

In addition, the main focus of circle is to choose a project to work. According to Maia, “A project is something you want to create or have been resisting doing, and circle provides a safe place for structure, accountability and inspiration.” Some examples of projects are gardening, public speaking, learning a musical instrument, learning a language, developing a business plan, designing a website, starting a business, community service and self-care such as losing weight, exercising and eating healthily. According to Mary, “Working on a project is a process of getting to know one’s self in a circle filled with love, acceptance and nonjudgment that can lead to a sense of empowerment.”

Holly Sharp of Richmond is a graduate student and has found working on a project to be enjoyable and a distraction from school, which can be stressful at times. She said, “I am goal-oriented and like getting a boost of encouragement from other women.” The last session Holly attended, she worked on organizing her house as well as doing a deep cleaning. She wasn’t able to complete everything she had hoped to but was applauded in circle for the work she did do; subsequently, she felt accomplished and pleased with herself. Holly also said, “I was able to challenge myself, make a commitment, and change parts of my lifestyle.” She has now turned this into an ongoing project.

Gail Phillips of Lenox, who is a board member, did a research study for her project, interviewing WOT women to understand better how they were managing during the pandemic. The common themes were acceptance, empowerment, resiliency, adaptation, willingness, courage, optimism and adventure. As such, Gail was quite pleased with her study because she learned that WOT women were feeling empowered during this difficult time, as illustrated in her project.

Meanwhile, one of the unique aspects of WOT that sets it apart from other support groups is the buddy system. Each week, members are assigned at random a buddy circle for the purpose of receiving extra support on their project. Prior to the pandemic, it was common for women to meet for coffee, a hike or a stroll through a museum. Because of the pandemic, women now chat on the phone or meet via Zoom. Despite pandemic limitations, the buddy system still remains a favorite activity among WOT members. For instance, Olivia Krywucki of Pittsfield has found the buddy system to be just as valuable as being in circle and she shared, “It is about making friends informally.” As the result of the buddy system, Olivia was encouraged to go to seminary. Bari Price of Harrisburg, Pennsylvania, also spoke highly of the buddy system. She said, “You get to know a new person intimately, discovering commonalities that might have been overlooked in circle.” She also said, “It is extra support as well as an opportunity to get new ideas on how to approach your project.” Bari, has been a member of WOT for several years, and her most current project was starting a job search. After telling a buddy her intent, the buddy, a seasoned career counselor, took her under her wing, and together they wrote her resume and cover letter and devised a strategic plan to find a job. According to Bari, “I was beyond being thrilled and was touched that someone who was a stranger to me prior to WOT was so generous and kind.” Furthermore, she said, “I speak to this person every day and we have formed a great friendship even though she is in Massachusetts and I am in Pennsylvania.

WOT has existed for a number of years and is always welcoming new members to become part of an ever-growing local network of 350 women. With the onset of the pandemic, WOT membership is gaining momentum as the desire to socially connect becomes a stronger need. It is a place where much can be learned and applied outside of circle. According to Maia: “WOT is an incredible healing practice which promotes individual and collective empowerment. It is not exclusionary: Our gifts bring light to the world; there is good in everyone’s growth.”

Author’s note: To learn more about WOT, a nonprofit organization, and its upcoming circles, go to https://www.walkingourtalk.org/.

There is a free introductory circle via Zoom Wednesday, Sept. 30 at 6:30 p.m., providing an overview on how WOT operates with opportunity to register for early-bird rates. The next round of Zoom circles start the first week of October.