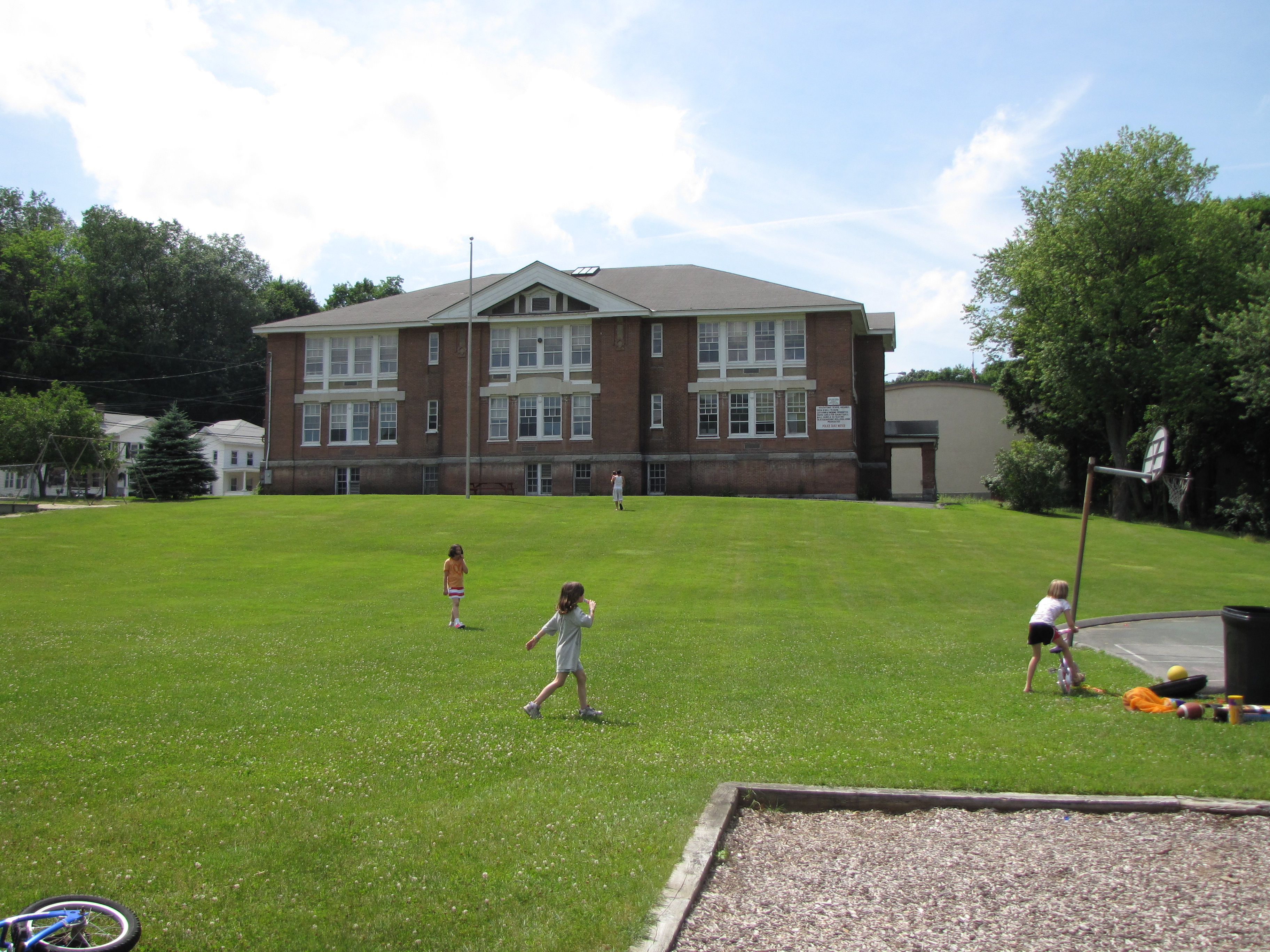 The former Housatonic Elementary School overlooks the playground in center of the village of Housatonic. The school's playground and lawn create what amounts to the village green. Photo: David Scribner

Housatonic — One of the town’s most troublesome surplus properties could be turned into a combination of affordable housing and work and office space if a proposal received by the town becomes a reality.

Town manager Jennifer Tabakin told the Selectboard Monday night (August 28) that she has received a proposal from Grayhouse Partners, a general contractor specializing in renovations, to buy the Housatonic School. She declined to disclose the proposed purchase price but said, “it’s not a low-bid type of scenario.”

The proposal, the only one the town has so far received for the latest request for proposals, is for an adaptive reuse of the vacant 110-year-old school on Pleasant Street near the center of the Housatonic section of Great Barrington. The proposal calls for a mixed use of the building that includes a combination of housing and work space, with seven affordable rental units and a total of 14,000 square feet of commercial office space.

“The commercial components are anchored with shared workspace for start-ups and expanded businesses, and community and health education spaces,” Tabakin said.

Tabakin characterized the management and stewardship of the project as “a team approach,” with Grayhouse as the leader and partnering with the Community Development Corporation of South Berkshire, the Great Barrington firm of Clark & Green as architects, the Pittsfield-based Eco-Genesis as environmental consultants and Barry Engineers & Constructors, also based in Pittsfield, as structural engineers.

In its proposal, Grayhouse, which is based in Housatonic, says interested commercial tenants include software executive Jeffrey Blaugrund, now the owner of Braise Worthy, a food preparation start-up. There was also a letter of support from Berkshire Bank.

In a brief interview, Grayhouse owner Bill Nappo declined to discuss the specifics of his proposal beyond what Tabakin described publicly at Monday’s meeting.

“I submitted the proposal for economic development purposes of the town and the village of Housatonic,” Nappo said. “But this is all preliminary at this point.”

Nappo, a member of the town historical commission, has lived on Main Street in Housatonic for 16 years and has been involved in a number of historic preservation projects, most recently in the campaign to restore the old West Stockbridge Town Hall, which was built in 1854 and now houses that town’s historical society.

“I have a passion for restoring old buildings and preserving their historical integrity,” he explained.

The town’s request for proposals marketed not only the school building itself but the proximity of four other buildings on the National Register of Historic Places: the Housatonic Congregational Church, Monument Mills, the Rising Paper Mill and the Ramsdell Public Library. Also mentioned were the cultural and entertainment venues in the region.

Nappo declined to disclose the proposed purchase price. Tabakin said the proposal would become a public document as soon as she removed from it sensitive financial information about Nappo’s company. Tabakin said she would do that soon.

RFPs soliciting potential buyers or others who would want to use the Housatonic School were sent out in 2010 and again in 2012. More than two years ago, the town sent out another RFP but nothing came of it.

In response to the first RFP, the CDC in 2010 submitted a mixed-use plan that included 11 units of affordable housing and commercial space, including space for nonprofits and even a satellite office for police, CDC executive director Timothy Geller told The Edge. But eventually, Geller said former town manager Kevin O’Donnell “pulled the plug with no reason given.”

Shuttered by the Berkshire Hills Regional School District more than 10 years ago, the Housatonic School has a long and checkered history. The former community elementary school opened in 1909 and has remained mostly empty since 2003 when Berkshire Hills consolidated its schools with a new elementary- and middle-school campus on Monument Valley Road.

When the school closed, the town assumed ownership of the property from the school district. Berkshire Hills used the building for its administrative office for a couple of years and then moved to the Stockbridge Town Offices. The nonprofit Multicultural BRIDGE was based in the Housatonic School until 2007, when it moved temporarily to Pittsfield and eventually to Lee.

Parking will no doubt be an issue for any new owner of the school. The adjacent Housie Dome, which now functions as a community center and contains the former school’s gymnasium, will not be a part of the deal. The school’s playground is now a town park and also will not be marketed as part of a potential sale. So in any adaptive reuse of the building, neither the Housie Dome spots nor the playground itself could be used for parking, further complicating the reuse of the building.

Compounding the problem is the cost of remediation and code compliance. An independent study submitted to the town in 2012 by a building consultant found that any developer looking to renovate the building is facing a liability of at least $850,000 in required remediation of asbestos and lead paint hazards.

Including the removal of the asbestos and lead and the construction of an elevator needed to bring the building into compliance with the Americans With Disabilities Act, the total estimated cost of a renovation would be almost $1.9 million, not including design costs.

Even demolition would probably run in the range of $1.4 million, in part because the asbestos and lead would still have to be disposed of properly, the study found. The town’s task force, however, estimated demolition costs at only $400,000.

In order to offset other costs, the town and a buyer could negotiate a tax increment financing agreement, which would lower the new owner’s tax liability in exchange for meeting certain goals that would be beneficial to the town.

The Selectmen said little about the proposal, opting to wait until the next meeting of the selection committee, comprised of the Selectmen themselves. They will review the proposal at a special meeting Tuesday, Sept. 5, at 6:30 p.m. in the Town Hall in the Selectmen’s meeting room.