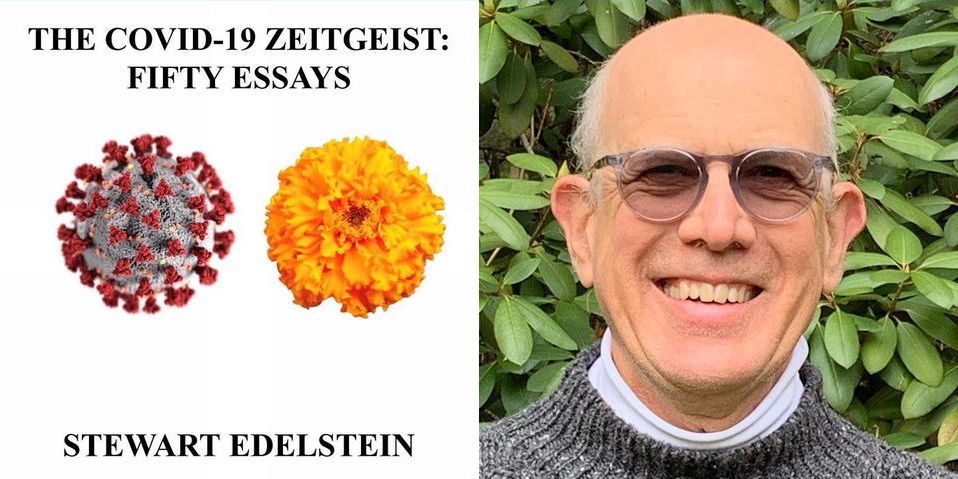 Stockbridge — Stewart Edelstein has a penchant for etymology — the study of word origins — one rivaled only by his passion for sharing said etymology of quotidian words encountered on a daily basis. Take, for instance, the word “etymology” (the etymology of which is relatively straightforward and not to be confused with entomology, or the study of insects) — Merriam Webster explains: “’Etymologia’ means ‘origin of a word’ in Latin, and comes from the Greek word ‘etymon,’ meaning ‘literal meaning of a word according to its origin.’ Greek ‘etymon’ in turn comes from ‘etymos,’ which means ‘true.’” This fascination gave rise to a collaboration, of sorts — way back in March when we were all shaking hands and scouring the library shelves in person, to name a pair of bygone habits — between Edelstein and Wendy Pearson, the director of the Stockbridge Library, Museum & Archives. Edelstein suggested that a series of “periodic short essays based on words apt for this pandemic might be of interest to library patrons,” and she heartily agreed. Five months and myriad essays later, “The COVID-19 Zeitgeist: Fifty Essays” is not only circulating through the 413, but all proceeds are being directed toward the Stockbridge Library Association.

“These fifty lively essays explore our pandemic world from two vantage points,” Edelstein explains in a statement on the back of the book. “COVID-19 as the scourge we must all deal with, and escape into nature as a soothing respite from all the deprivations we endure during this pandemic.” In short, Edelstein capitalizes on the aforementioned “etymological explorations” augmented with information on a range of other subjects worth knowing. The end result is a series of engaging essays that simultaneously inform and entertain. Edelstein’s inaugural essay, “Equinox,” was penned on the vernal equinox — which, in the Northern Hemisphere, occurred at 11:49 p.m. Thursday, March 19 — and explores, among other things, the Greek myth of Demeter and Persephone (the mother/daughter pair whose separation from one another for three months each year, due to Persephone’s unwise choice to consume three seeds from a pomegranate while in Hades, is used to explain the seasons.) As to the etymology of equinox? Perhaps you will enjoy knowing that it comes from the Latin “nox,” which means night (think nocturnal) and “aequus,” meaning uniform, identical, equal.

When my copy arrived in the mail, it came with an advance missive to turn to page 70, where the word “palindrome” (a word spelled the same forward and backward, of which my first name is an example) is discussed. On page 71, Edelstein offers a discussion of “semordnilaps” (the antithesis of a palindrome in that it creates an entirely different word when spelled in reverse). Among other topics, Edelstein’s approach offers insight on: how 14th century Venetian authorities dealt with the Black Death; what happens in your brain when you hug; what words have been coined based on the COVID-19 epidemic; why some people hoard toilet paper; and what norms might just become obsolete because of COVID-19. In addition to the 50 essays that made it to print, Edelstein has continued to write and share his musings online with patrons through the library’s Facebook page. I found #54, “Tomato” and #55, “Hybrid” particularly apropos considering the proliferation of the former now that it is late summer in the Berkshires and the latter, considering the school year to come for my two teenage daughters.

Praise for Edelstein’s collection of essays has come from the likes of professor Robert Longsworth, under whom Edelstein began his etymological explorations at Oberlin College more than 50 years ago, who calls “’The COVID-19 Zeitgeist’ a delightful tonic in this season of enforced confinement!” and goes on to commend Edelstein “on the conception and execution of that admirable book.” Courtney George lauds Edelstein’s breadth, saying: “You have assembled quite a cast of characters. A book that includes everyone from Susan B. Anthony to Zorro is sure to delight.” Kathryn Yudkin admits: “My mind is getting a good scrubbing from all the information and references that abound. It’s amazing how you tie such disparate notable people, words, and origins together. It’s a gem. And the cover is perfect;” and Jonas Dovydenas cuts straight to the chase: “fifty nifty essays. . . quite a page turner.”

Stewart Edelstein is the author of “Dubious Doublets: A Delightful Compendium of Unlikely Word Pairs of Common Origin” (John Wiley & Sons, 2003); he has twice been a guest wordsmith for “A.Word.A.Day” (wordsmith.org); he has created word quizzes for Merriam-Webster (m-w.com); and taught three OLLI courses on etymology, and is currently working on the fourth, the subject of which delves into the origins of idioms (“In a Pickle: Debunking and Revealing Origins of Common Idioms”). In a nod to his affinity for tangents, Edelstein points out that he was a commercial trial lawyer for four decades, two of which he taught clinical courses at Yale Law School. He is also the author of “How to Succeed as a Trial Lawyer,” now in its second edition, published by the American Bar Association in 2017. His plan, at present, is to continue writing these little essays — each based on a word that is apt for each week — until he runs out of words.