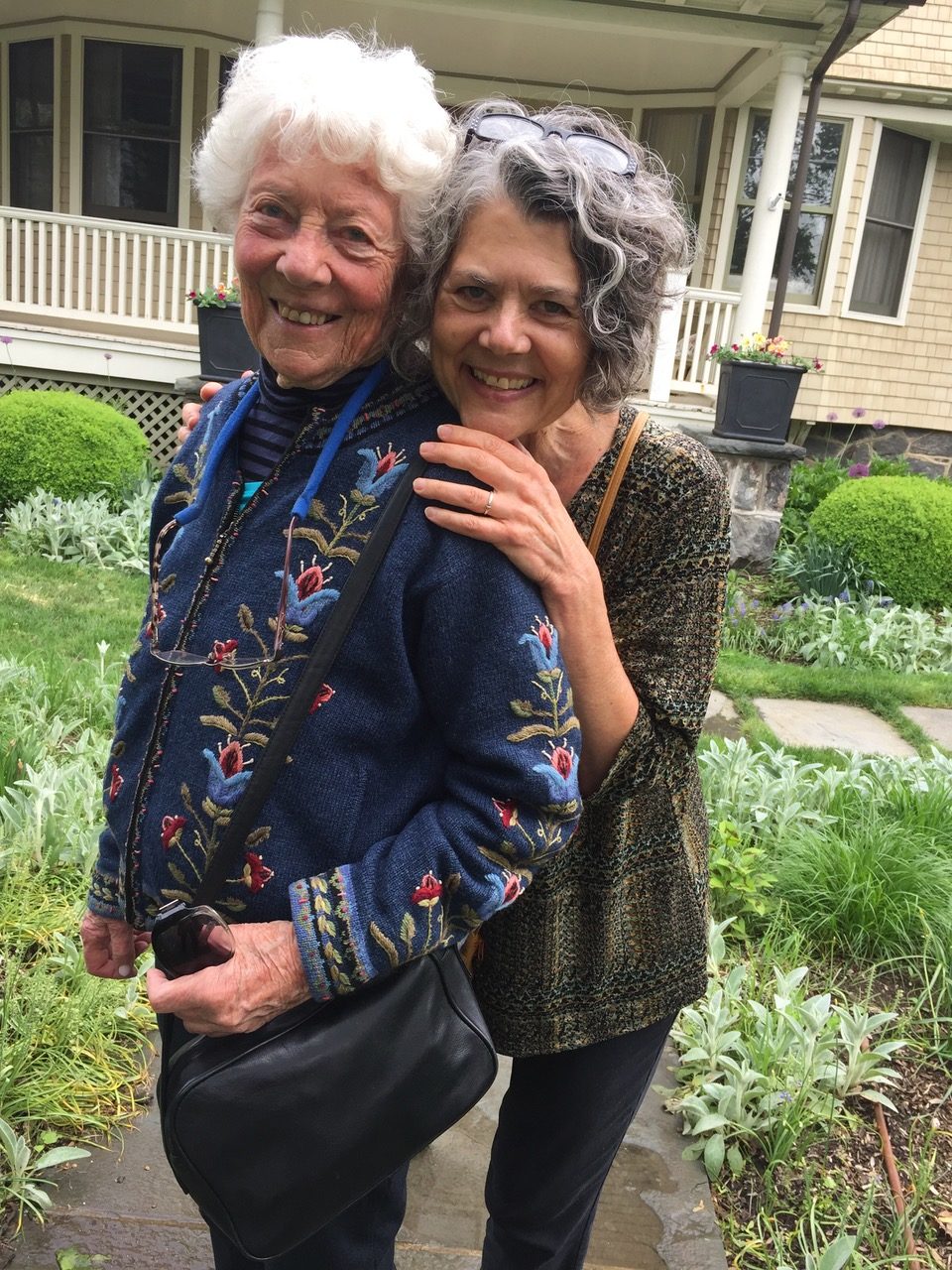 “It wasn’t loss that triggered this, it was curiosity,” says filmmaker Cathy Zheutlin of her new documentary, “Living While Dying,” a short film whose subtitle reads: “A story of life. A story of death. Finding joy in the journey.” Zheutlin, who stumbled upon the good fortune of having two parents alive in their 90s, became fascinated with the idea of mortality, an inevitability we all face, despite it being hidden from view — and polite conversation, for that matter. Her exploration of the topic extends an invitation to viewers, one that hinges on conversation as the most necessary component surrounding mortality and the end-of-life choices that arise as a result. After having made its debut in Ashland and Portland, Oregon, where the filmmaker and her mother reside, Zheutlin’s film is making the rounds in the northeast; it will be screened Wednesday, June 6, at 7:30 p.m. at Kimball Farms Life Care in Lenox.

The inspiration for Zheutlin’s film came when her mother’s partner, Clair, learned he had terminal cancer. “We had a dying man in the living room,” she recalls in the film’s trailer. “I am a filmmaker so I asked Clair if I could film him; he said ‘yes,’” continues Zheutlin. This impetus, coupled with what she calls a desire to push the envelope of consciousness, led Zheutlin and her husband, Edis Jurcys, a brilliant photographer, to embark on the telling of these stories. Their exploration took them to Australia where they met a death walker, and to Bali where they saw a mass cremation. When the pair learned that dear friend Don was dying back at home, Zheutlin took “a deep dive into reflecting on death and grappling with the meaning of life.” The result is “Living While Dying.”

“This is territory that we cannot avoid,” said Zheutlin, whose work stemmed from a simple observation on her part: “So many people have so much to say [and yet] the conversation is mostly not happening.” The documentary project, a full five years in the making, catapulted her back into the world of professional filmmaking after a 32-year hiatus. She decided to pick up her camera and film four friends with terminal illnesses who chose to live out their days in hospice care at home. What ensues is a bold discussion of the inevitable, and one filmmaker’s attempt to remove the pall from a subject that, if considered from a different perspective, is but the final developmental stage in life — one to be revered and celebrated in much the same way as all those that precede it.

“You can’t destroy energy, that became really clear to me,” recalls Jonnie Zheutlin of her own experience walking through end of life with her partner of 12 years, Clair. “I don’t actually fear dying,” is the elder Zheutlin’s stance on the subject. Jonnie took an OLLI class in Oregon called “Talking About Dying as If It Could Happen to You,” which she found to be both fascinating and on target — not to mention independent of her daughter’s project. This, coupled with Clair’s death, urged her on to further explore the subject. She recounts the first time Clair showed up, shortly after he died; she was looking out the window and, from the trees, this tape kept coming out. At first Jonnie thinks it’s a kite; she wonders what’s going on and then she has a realization: “The way it moved, it moved the way Clair danced — it was so clear, but I was frantic, I wanted someone to validate it,” she explains. From these experiences, a conversation between the mother-daughter pair has ensued.

“The advantage of having conversations when we are healthy is that, when we are in crisis, it’s not the time to begin thinking about all the various choices. And there are a zillion choices,” says Zheutlin. It’s the pre-thinking to support us along the way that Zheutlin hopes will inspire others to embark on a dialogue that, for many, is not welcome. In the documentary, Jonnie and her daughter model a conversation (Zheutlin is the film’s narrator) while Jonnie sits in a coffin. Zheutlin was conscious of her choice to model the conversation with her mother — who is very comfortable talking about her own EOL choices — in the presence of an image that was not terribly stereotypical. She felt the iconic images of individuals contemplating death while meandering through a cemetery to be too cliché. “That step of taking something scary and foreign and only associated with grief” proved liberating in her portrayal. She goes on to clarify: “I don’t think we should ever disassociate grief and death — it’s just that it’s not the only part [to be emphasized] because it’s natural. We somehow need to integrate it,” Zheutlin explains.

The film arises out of a grassroots movement — with titles running the gamut — that revolves around reclaiming death in much the same way baby boomers reclaimed birth. “They said, ‘let’s have our babies at home, [as] birth is not a medical event.’” Well, death isn’t necessarily a medical event, either. “Death is a natural thing that happens at the end of every single life. It’s 100 percent going to happen,” Zheutlin reminds her audience. But we don’t get to see the images of nonmedicalized death; this is where Zheutlin comes in. “Living While Dying” offers viewers a glimpse of what death looks like when one goes the nonmedical route and chooses hospice at home. “My experience is not prescriptive or comprehensive; everybody’s experience is going to be unique and important and worthy of being uplifted,” Zheutlin said. “I’m not promoting an ideology, I’m promoting a conversation,” she says of her intensely personal approach. One thing is certain: Death is somehow less scary after viewing this film. “It’s not articulated, but it’s felt,” Zheutlin explains. As for Jonnie Zheutlin’s last word on the topic? “I used to have cement in my mouth,” she says, borrowing a term she once heard a child use in her days as a therapist. “I am learning to verbalize; it’s taken me almost 90 years to learn to use my voice,” she jokes, adding “Thank God I’ve lived long enough to do that!”

Zheutlin’s film has been hailed as a brave and honest immersion in a difficult topic. In her director’s statement, she cuts straight to the chase: “Death is a teacher. Many of us are scared of death. We feel unprepared both for our own deaths and the deaths of people (and animals!) we love. Our associations with death are morbid, dark, cold, depressing, and laden with grief and pain. So we do not talk much about death. In modern times, we have medicalized the end of life, and disconnected it from nature. In trying to prolong life by any means necessary, we only succeed in keeping death shrouded in darkness. By keeping our distance from death, cloaking it, hiding our eyes from it, we actually lose touch with a sacred phase of life. Because, as we all know, death is a part of life — for all of us.”

Director-producer Zheutlin has been principal cinematographer on award-winning PBS documentaries including “The Life and Times of Rosie the Riveter,” “The Other Philadelphia Story” and the 1982 Academy Award nominee “See What I Say.” Her 1986 documentary “Just One Step: The Great Peace March” led to a co-production with Soviet TV about the first Soviet-American peace walk. In short, she has spent her career making films that explore consciousness and encourage progressive change. Her documentary “Living While Dying” was an official selection for the THIRD ACTion Film Festival, which celebrates aging and older adults while helping to create an age-positive culture shift. For more information, visit www.livingwhiledying.org.