Among the many changes we’ve witnessed since “stay at home orders” have anchored so many of us to our homes, some extraordinary changes have been thrust upon us. For some, the use of screens — for entertainment, work, school, connecting to friends, and even for religious rituals and traditions have been havens of something more or less “normal” for daily interactions beyond our front doors. Those of us who work at home have felt the learning curve of collaboration through platforms like Zoom, in which we see ourselves arranged with co-workers or friends in a quasi-Brady Bunch configuration. But frankly, I’m already experiencing screen fatigue. With bloodshot eyes and a sore back from sitting in my office chair all day yesterday (and many other days this week) I began to think about whether it really is so desirable to grab a new technology and discard the old ones.

I seem to spend an extraordinary amount of time setting up times when I can communicate with different groups or individuals, and my calendar is packed with dates and times dedicated to communicating, even if I can’t actually have a voiced conversation with someone. Yesterday I was confined to one-way videoconferences, email and text for 13 hours. While that may seem like a lot, the Pew Research Center reported that in the pre-pandemic days, the average American faced a screen 11 hours a day. Already, the use of interactive videoconferencing is shifting to presentational mode for many purposes, and even though a viewer can email a comment or question, the interactive nature of the platform is subservient to the presentational aspect.

Almost everyone who attempts to use online video chats with multiple people in real time finds that the technology and the conversational protocols we’re used to in social life don’t translate well to conversational video platforms. Usually the first couple of “meetings” are interrupted by social greetings from everyone to whomever just joined, and trying to talk simultaneously without someone moderating the sequence of speakers can raise anxiety as well as become a distraction. One of the first lessons a Zoom moderator learns is to shut off everyone else’s microphone to avoid cacophony. Certainly conversational platforms have a very important place, but is there a way they can be used better? 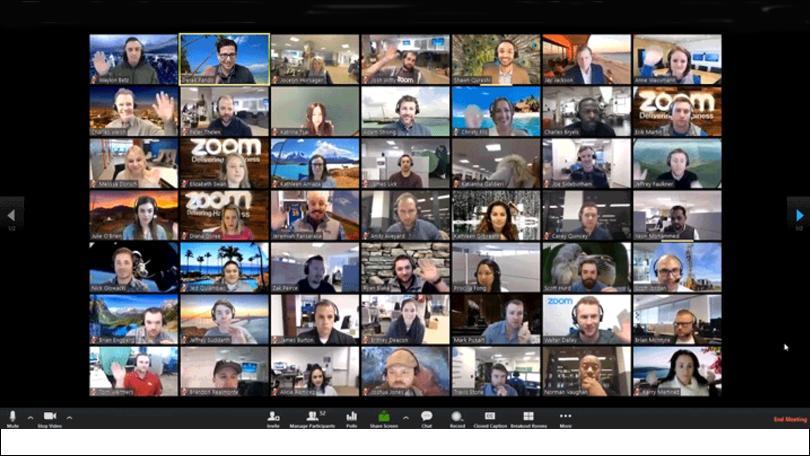 One friend of mine, with whom I usually speak by phone a couple of times a week, insisted we have a FaceTime chat instead. I had to terminate the conversation when I realized she was also distracted by answering e-mail even while we were talking. The message she was sending me was that I wasn’t important enough for her to focus on me alone. In that case, the use of the video chat actually worked against our purpose of trying to have a heart-to-heart conversation.

The same friend later told me (in a traditional phone call) that she doesn’t like Zoom because she doesn’t like the way she looks on screen. I understand her concern—screens can amplify our bad behaviors and make us less likely to “be ourselves,” especially when the social groups with whom we interact have preconceived ideas about what type of behaviors are “professional.” Our bad habits are on view to everyone, and we become self-conscious.

The real impact of trying to find new technology answers to immediate social problems is not how we negotiate the learning curve of being professionally online from our bedrooms or living rooms—we can’t avoid that. The bigger issue is that we may tend to forget that conversation itself is fundamental to our being human and that technology can only answer a part of that need. That’s certainly one major reason why social isolation has raised so much anxiety for people at this critical time in history.

MIT psychologist Sherry Turkle conducted interviews with people of all ages for her book, “Reclaiming Conversation: The Power of Talk in the Digital Age.” In a fascinating TED Talk, she discussed how conversation is critical to our ability to experience empathy. Citing evidence that children in particular, are losing their ability to learn empathy, she claims that the only way we really can develop empathy is through conversation. When we read non-verbal cues, listen to the way words are expressed, and gauge the level of care and concern from someone we converse with, we feel heard in an honest way that can’t be simulated through the artificial screen.

Turkle was overwhelmed with the way even very young children wanted their parents to put down their phones and pay attention to them. Even little human beings want undivided attention, but the point is, we give far more empathy cues to people in conversation than we can ever get through a screen—especially if we are distracted by looking at ourselves or responding to the constant barrage of information that never gives us the opportunity to stop, think, and feel our emotions.

There is nothing inherently wrong with conversational video platforms, and of course, for the right purpose they can be absolutely wonderful. But sometimes it’s important to think about the right tool for the right purpose. In these days in which we need to find ways to connect with each other, perhaps we could look at our toolboxes and find the best tool for a specific job. Over and over again, the old technology of the phone expresses emotion far better than the visual image. A voice can touch a heart with emotion far better than a screen for telling someone you care about them. The visual images are important and sometimes rich, but sometimes it pays to think about how the earlier technologies are more user-friendly and how we’ve learned to use them, too.

So if reading this essay has made you think a bit about how screens have both positive and negative characteristics, I would like to ask you to think of people you care about. You might not be able to be with them face-to-face, but I guarantee that a phone call—a voice—and an acknowledgement that you hear them, and that they are important enough for your personal attention, will make their day brighter, and you might find that it makes yours brighter, too. And now, I’m going to take a walk in the sunshine.

Jarice Hanson is, among other things, Professor Emerita from the University of Massachusetts Amherst, where she was a member of the Department of Communication.