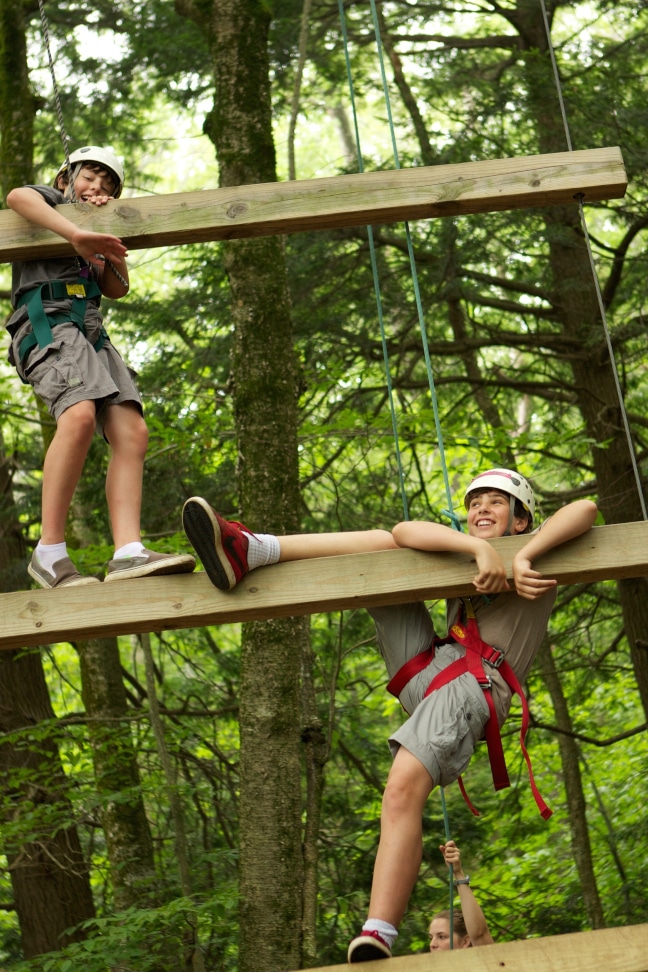 Campers enjoy a recent summer at Camp Hi-Rock, one of the many area summer camps grappling with how to adapt to life during COVID-19. Photo courtesy Camp Hi-Rock

On May 1, the American Camp Association did not release its highly anticipated list of recommendations, based on even more highly anticipated guidance from the Centers for Disease Control and Prevention, about whether and/or how summer camp 2020 can open for business as unusual. It did, however, release an extensive table of contents for the upcoming guidelines, which some local camp directors are taking as a positive sign that, fingers crossed, they will be permitted to operate in some capacity, probably starting in July.

Among the headings listed are several that would sound, under normal circumstances, more in line with those required in a hospital emergency room. These include Screening and Preventing COVID-19 Infections; Cleaning and Disinfection; and PPE Plan – for staff and workers. Alongside all the 24/7 planning that goes into a successful summer camp season in the best of times, camp staff will have to set up myriad new systems for preventing the spread of the virus as far as they’re able. But Rachel Chadwin, co-director of Camp Mahkeenac on the Stockbridge Bowl, is not daunted by the prospect of new procedures to put in place. “Camp people are made for this,” she said. “We’re always, constantly needing to adapt on the fly.”

The Massachusetts state government has asked camps to hang tight and wait for all the guidance to be finalized before making decisions about opening or closing, and Gov. Baker has said his administration’s guidelines will be out by Monday, May 18. “That’s late for us and families, but that’s the time frame,” said YMCA Camp Hi-Rock director Jessica Speer-Holmes. If the state does determine that camps cannot open at all, there is no appeal process. Towns cannot override state decisions.

The governor has ordered the closure of all nonessential childcare facilities through Monday, June 29, and several Berkshire County camps are taking those recommendations as general guidelines to follow for camps. Berkshire Waldorf School in Great Barrington, which offers outdoor play-based day camps for children age 3 through fourth grade, has cancelled its first planned week of camp, June 22-26, and is refunding deposits and tuition payments to families who have signed up for that week. Flying Cloud Institute has moved its first week of camp, originally scheduled for the last week of June, to August.

Some local camps, however, have already made the difficult decision to cancel their summer seasons. These include IS183 Art School of the Berkshires in Stockbridge; and the two United Reform Judaism camps, Camp Eisner in Great Barrington and Crane Lake Camp in West Stockbridge, that operate here. (URJ cancelled all 16 of its summer camps.) Shakespeare & Company has canceled its theatrical season, along with camp.

IS183 director Lucie Castaldo was concerned that there would be no way to keep children in summer camp from interacting — and sharing bathrooms and art materials with — adult students who use the same building, so, she added, “Instead of being an additional factor of uncertainty in our community’s summer plans, we decided to make the call now so that we can focus our energy into planning virtual programming and our families and faculty can adjust their summer plans with ample time.” The school already has eight classes offered online, and six instructional videos with staff.

The leaders among the rest of the summer camp landscape are in an anxious but optimistic holding pattern.

In the best-case scenario, with camps permitted to open up for July and August, there will definitely be lots of changes. A couple of weeks ago, the Washington Post got ahold of a leaked CDC draft document, which stressed, among other requirements, the need for separate groupings of children. This would mean, at Camp Hi-Rock, for instance, that the frequent ungroupings and regroupings of kids that used to take place throughout the day — a different group for soccer, swimming, archery or any of the other dozens of camp activity periods — would be a thing of the past, and children would be with the same children and counselor all day and every day.

“This would be a big shift,” Speer-Holmes acknowledged.

Meanwhile, she and the other directors she’s in touch with are not used to sitting on their hands. They’re itching to plan out the two-month season that they usually take 10 months to plan.

“We’re spinning our wheels anticipating different scenarios. That leaked doc gives hints of what’s to come, but we’re not taking any action until it’s official. We are hiring, planning, recruiting. I’m vetting emails constantly from parents saying how much they hope camp will open, how it’s the happiest place for their kids.”

This is perhaps most true for special-needs children, she pointed out, whose week or two at special-needs camps are the only times of the year in which they have peers to play with all day long. This group of students is especially deprived in the remote learning sphere, since they receive so many supports one-to-one in the school setting that are impossible to provide virtually.

“There are so many people hanging onto hope for summer camp for so many reasons,” said Speer-Holmes.

Of the nearly 450 campers who registered at Camp Hi-Rock early in the year, only 15 kids have cancelled. (The overnight camp normally serves 1,000 kids per summer.) Camp staff surveyed registered families recently about their plans, and answers gave them hope. “Just under 50% said, ‘If you are allowed to open, we are there.’ Twenty-nine percent said they were cautiously optimistic. Others had concerns. Only 5% said, ‘No matter what, nothing will make me comfortable with camp this summer.’ ”

Maria Rundle, executive director of Flying Cloud Institute, which operates a day camp focusing on STEAM (Science, Technology, Engineering, Arts and Mathematics) in New Marlborough and now at April Hill Education and Conservation Center in South Egremont, said: “My staff is agonizing every day about July. This is ironic, too, because we had record registrations in January and February. Then they stopped so fast one day in March, we thought the website had broken.”

The state of Maine, she said, has published particularly detailed and helpful internal protocols that camps may follow during the pandemic, and Rundle and other camp directors have been poring over it, in hopeful anticipation of being given the green light. Rundle stressed that one big benefit of this summer camp season will be its serving as a prelude, or “test run,” to returning to an altered school environment in the fall.

“The kids can practice the habits they will need in September.” She’s also concerned with the damage done to children’s emotional and mental health during lockdown and pointed out that camp activities can help repair some of it. “The expressive arts, especially, can help kids work through their feelings about missing school and losing all this time with their friends.”

At Berkshire South Regional Community Center, director of educational and community programs Kate Tucci said they are, like so many others, “just playing a waiting game.” As a community center that serves a large number of senior citizens with an influx of snowbirds arriving in the summer, it has many additional considerations to think about apart from keeping groups of children safe from each other. “We want to take care of everybody. Ideally children will be outside as much as possible.”

Flying Deer Nature Center, based in East Chatham, New York, (where, in full disclosure, I am the board chair) believes it is in pretty good shape for whatever is coming down the pike, as all of its nature connection programming, year-round, in all weather, takes place outdoors. Its new home at 122 Daley Road in East Chatham comprises 136 acres, with group gathering places spaced far apart. Michelle Apland, Flying Deer’s director, has taken heart in reading about plans for reopening schools here, and also in China and Europe, where, she said, “Everyone is asking how much can be done out of doors.”

Tucci is also optimistic, but sad, too, for the impact the pandemic is having on camp people. “It’s heartbreaking to watch as some make the difficult decision to close down for the season. This is what we in the summer camp business live for!”