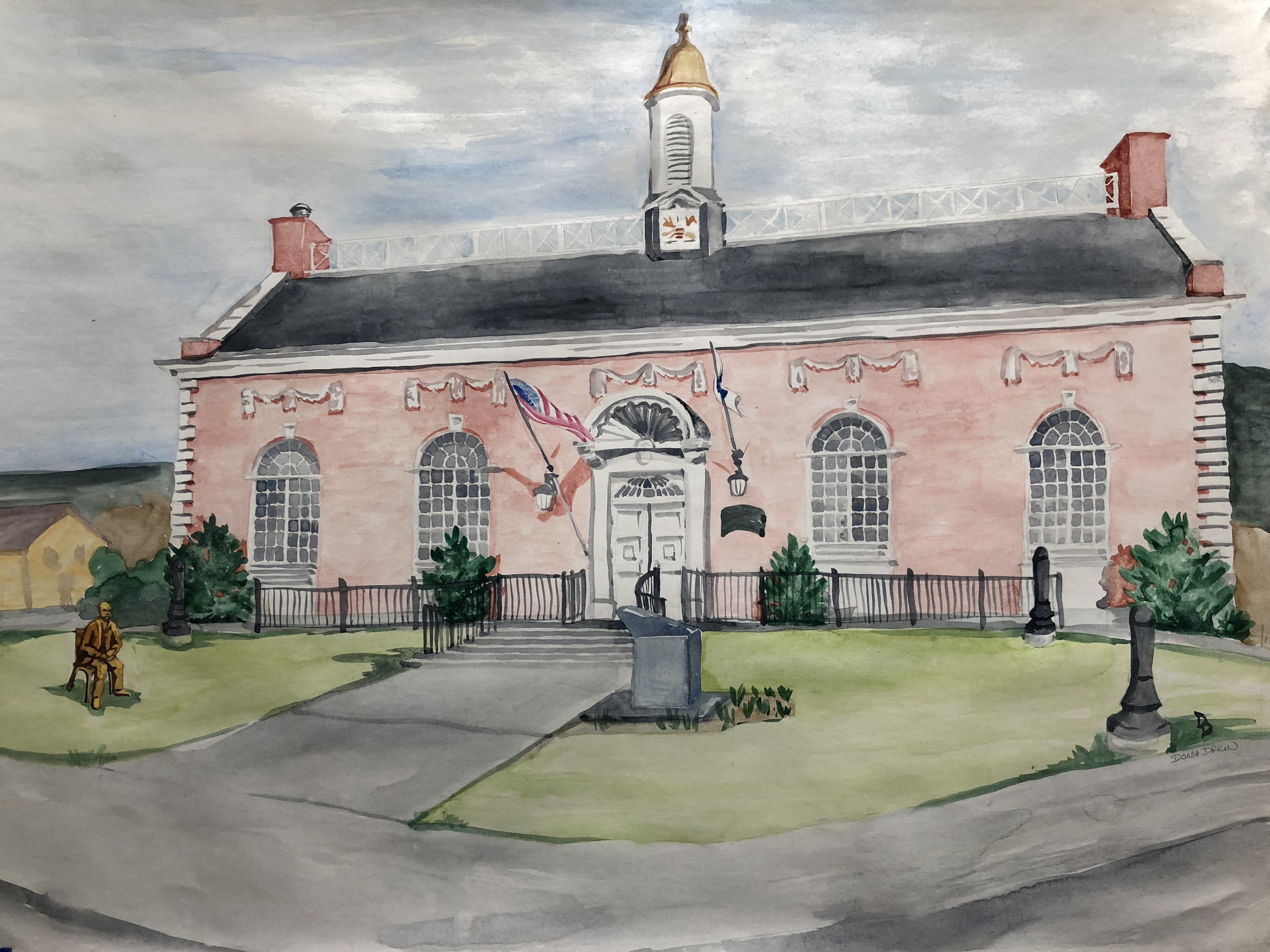 A drawing by Donna Drew depicting the Mason Library with a proposed statue of W. E. B. Du Bois on its lawn.

Great Barrington — Plans to continue the celebration of the life of Great Barrington’s most famous native son on the year of the 150th anniversary of his birth are proceeding apace.

Not only are the supporters of the legacy of scholar and civil rights leader W.E.B. Du Bois trying to name one of the local public schools after him, as reported in the Edge yesterday, but they want to commission a sculptor to come up with a life-sized likeness of him that would be placed on the front lawn of the Mason Library.

Indeed, the trustees of the town libraries gave the go-ahead last week for the concept. The unanimous vote was merely advisory since the project would need the approval of the Historic District Commission and likely the Great Barrington Selectboard.

The idea was the brainchild of Daniel Klein, an author and philosopher who has lived in Great Barrington for more than 40 years. Last fall, he was surprised to learn that no monument to Du Bois existed downtown.

So after discussing the matter over dinner with friends at the Aegean Breeze, Klein posted a note on Facebook in which he asked his friends if he could “toss out an idea” — a statue of Du Bois, who co-founded the NAACP, in Great Barrington. 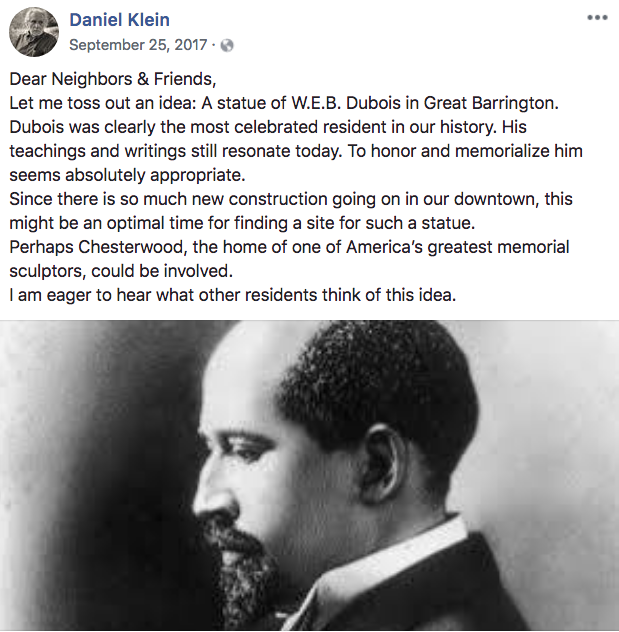 The reaction was so positive that Klein and his wife, journalist and documentary filmmaker Freke Vuijst, set the ball in motion for the statue. And the idea came at just the right time. In his honor, the town and Du Bois organizations are staged a weeks-long celebration of his birth.

Klein was in the library May 17 where Vuijst unveiled an representation of what what a statue would look like if placed on the front lawn of the Mason Library, which is on Main Street next to the Congregational Church and, therefore, squarely downtown.

See video below of Freke Vuijst presenting to the library trustees and unveiling the design for the proposed Du Bois statue placement:

Renowned novelist Herman Melville lived for a while in Pittsfield and is said to have written much of his epic novel “Moby-Dick” at his Arrowhead estate. Gilded Age novelist Edith Wharton designed her own estate in Lenox, the Mount, and wrote several of her works there. Both estates have been preserved as popular tourist attractions.

Vuijst unveiled the design for the trustees. The rendering was designed by Great Barrington resident Donna Drew, who retired two years ago as an art teacher in the Southern Berkshire Regional School District after 41 years. She now works at Frelinghuysen-Morris House & Studio in Lenox.

Drew’s illustration depicted a statue of Du Bois seated on a chair on the left portion of the front lawn. Trustee Lauren Clark, an artist herself, praised the design but added, “I envisioned a whole bench with him on it because then you could sit next to him.”

“I kind of like your idea, I really do,” Klein said. “It’s intimate. … eventually maybe there would some benches there and we could see young people reading there.”

Klein added that, even if the group working on the statue concept obtains all the final permits and clearances from the town, then the library trustees “would have advise and consent over the final design. Nothing would be done without an okay from you.”

See video below of the trustees and audience members discussing the proposed statue:

Gwendolyn Hampton VanSant of Multicultural BRIDGE and a member of the Du Bois Educational Series Committee, which was commissioned by the town to continue the 150th birthday celebration and collaborated with Klein and Vuijst on the statue idea, read some statements from supporters of the initiative. Click here to read one from Benton Avenue resident Tim Likarish. Here is an excerpt:

“This past year, communities across the country are struggling with the harmful legacy of monuments and memorials that do not reflect our values … As we grapple with the question of what statutes need to come down, we must also ask ourselves: Whose histories have been erased, ignored and made invisible?”

Longtime town resident Vanessa LaGrande also read a statement describing the library as “a natural fit for a place to honor and celebrate W.E.B. Du Bois” and that “it’s nearly impossible to overstate the impact of his writing and life’s work on this country’s history.” Click here to read Le Grande’s entire statement.

Vuijst explained that, if permission is obtained to site the Du Bois statue on the library lawn, then its supporters will have to engage “in some pretty serious fundraising.”

There would also have to be a separate fund for maintenance. While acknowledging that it would be substantial, Vuijst was not sure how much would need to be raised, “but it’s important for people who contribute to know it will be in a very prominent place in the town where he was born.”

Trustees Chairman Patrick Hollenbeck suggested his board come to a consensus, while acknowledging that, “What we can take is an advisory vote; we don’t have a lot of authority on this. We can support the idea.”

Not everyone was thrilled with the idea of honoring Du Bois. Marine Corps veteran and Republican Town Committee Chairman Andy Moro wrote a letter to the editor objecting to the idea of a statue honoring Du Bois, who embraced communism at age 93, in a prominent place.

“We answered the call to defend our country against communism, not join the Communist Party to support actions against the United States,” Moro wrote.

In an Edge interview, Moro said he and other veterans he has spoken with would be happy to have a statue in a different location, such as the Du Bois homesite, a national historic site well west of downtown.

But Vuijst told the trustees, “You don’t want to have it in a place where nobody sees it. He really is an incredible product of our community. That is something to be unbelievably proud of.”

It’s not as if Du Bois is without recognition in the town. There is the Du Bois Center at Great Barrington on Route 7 near the Big Y. It opened in 2006. And of course, there is the aforementioned birthplace of Du Bois, known as the W.E.B. Du Bois National Historic Site, on Route 23 on the way to Egremont. Du Bois was born Feb. 23, 1868, in Great Barrington.

The Housatonic River Walk also contains the Du Bois River Park. In addition, several Du Bois family members are buried in the Mahaiwe Cemetery, though Du Bois himself is buried in Ghana, where he lived out the last few years of his life.

Moro said siting the statue on town-owned property would be “an insult” to veterans who fought against communism in Korean and Vietnam. Moro further complained of a lack of “due process.”

“If they truly wanted this, why didn’t they reach out and get input from the veterans?” Moro asked rhetorically.

Moro said he and veterans’ groups in town are in the process of deciding how to proceed. They might appear before the selectmen, the school committee or the library trustees at one of their meetings soon.