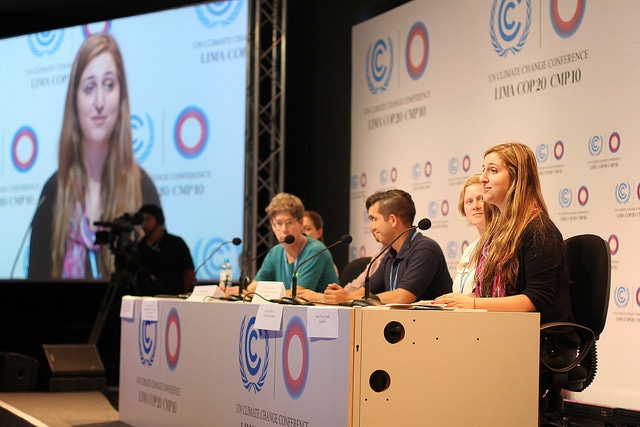 Lima, Peru — The question that nations worldwide are grappling with this week as the United Nations convenes the latest round of negotiations on climate change, is one that residents and public officials in Berkshire County often struggle with: How can we provide energy for people today without undermining future generations?

In the Berkshires, this question is playing out in town meetings and conversations about the expansion projects of Kinder Morgan’s Tennessee Gas Pipeline. Here in Lima, where I’ve traveled for the UN climate change negotiations, the question is about how to dramatically and equitably reduce greenhouse gas emissions.

Last year, the climate change talks were defined by Super Typhoon Haiyan which decimated the Philippines killing over 6,000 people and prompting Philippine climate negotiator Yeb Sano, and hundreds of others, to fast during the negotiations. Now, as I write this, Super Typhoon Hagupit is making landfall within 100 miles of typhoon Haiyan where it is hitting areas still recovering from last year’s storm. Storms like these are anticipated to increase in intensity without a rapid reduction in our greenhouse gas emissions worldwide. Already, oceans have risen eight inches globally meaning that storm surge is then more destructive. The source of these emissions and an area where we can take action at the international level, but also in towns across the Berkshires, is the use of fossil fuels.

To give ourselves the greatest chance of avoiding the worst effects of climate change — the feet of sea level rise, the loss of fertile lands, and other irreversible impacts — we must peak our greenhouse gas emissions worldwide by 2020. This is no time at all. In the Berkshires, we must step up and take responsibility for our piece of this challenge. Ninety seven percent of climate scientists agree climate change is due to emissions from our society. If you had this much agreement from a team of doctors, would that not be reason to begin treatment immediately?

For us in the Berkshires, our treatment means making the decision to do everything we can to stop the expansion of Kinder Morgan’s pipeline projects. If not only for the local risks to private property, public health, and energy prices, but also for our young people and people globally that will live in a world dramatically different from today without action on climate change.

Kinder Morgan’s Tennessee gas pipeline is one piece of this global conversation. Gas, like what Kinder Morgan pumps through the Tennessee Gas Pipeline, is predominately methane. When burned this methane is released as carbon dioxide. Both methane and carbon dioxide are greenhouse gases that contribute to climate change. Of the two, methane is more damaging in the short term, but emissions from carbon dioxide last much longer in the atmosphere causing damage for decades. There is not conclusive data on how much gas leaks as it is drilled then transported to the power plant where it is burned. Some estimates are that as much as 12 percent of gas leaks out before it reaches power generation facilities, contributing to climate change. Burning natural gas releases less carbon dioxide than coal and oil, but it still releases carbon dioxide, thus contributing to climate change.

At the climate talks in Lima, countries are beginning to coordinate and put forward their commitments to reducing greenhouse gas emissions. There hasn’t been much big news out of the first week of negotiations; talks continue next week, however. Ahead of the talks, the U.S. and China made a joint announcement on their pledges to curtail greenhouse gas emissions which alone will reduce 640 billion tons of Carbon, greater than all the emissions from fossil fuels since 1990. This is an important step, but insufficient without greater action.

With a peak in emissions in 2020, we must then quickly begin to reduce our emissions every year until the economy of the world is largely operating without fossil fuels by midcentury. Gas pipelines, power plants, and other energy infrastructure is typically built to last for a many decades. The existing Tennessee Gas Pipeline that runs from Richmond through Lenox, Tyringham, and Sandisfield was built decades ago. Given the timeframe we are working with, we have no time left to expand new fossil fuel infrastructure that we will be locked into using for many years to come.

Fortunately, we have other options. Massachusetts is top in the nation in terms of energy efficiency. Through state programs like, MassSave, Massachusetts residents and businesses have incentives to conserve energy and improve energy efficiency that others don’t. These programs are underutilized, and can help ensure our state’s energy demand is more stable. Couple energy efficiency with renewable energy and we’re on our way to a low-carbon transition. In Great Barrington and Egremont, solar panels have popped up on homes as people joined together through the Solarize Massachusetts program to do bulk installations at a lower cost than many individual installations. The benefits of these efforts can go far beyond greenhouse gas emissions: permanent local jobs are created, air pollution is reduced, and money is saved.

Later this month, in response to groups working to oppose the Tennessee Gas Pipeline the governor will release a detailed study of possible energy scenarios for the state. Stanford professor Mark Jacobson has gone state by state and released scenarios for each state that would lead it to 100 percent renewables by 2050. The question is not whether it is possible for us to transition away from fossil fuels, but whether we will make it a reality. This is the choice we all face right now.

The climate negotiations here in Lima continue through the end of this week. They play a vital role in coordinating the action among nations, but this is not a top-down process. Countries must show up to the table with offers and a willingness to work together. For us in the United States that means ensuring our federal government supports strong climate action. President Obama has shown more leadership than his predecessors on climate, but more is needed. In the face of the dysfunction in Washington, we can still find paths forward at the state and local level. Aggregated, these actions can enable the federal government more room to move when the opportunity for action arises.

Already, local action on the proposed TN Gas Pipeline project is making a difference. Citing grassroots opposition, Kinder Morgan just announced that they plan to reroute their proposed Northeast Energy direct project. Climate organizations, indigenous groups, and landowners have kept the Keystone XL pipeline carrying Canadian tar sands to the Gulf of Mexico on hold for years. These efforts and others paired with the exponential growth in renewable energy and ever increasing energy efficiency, indicate we may be at the beginning of the necessary transition.