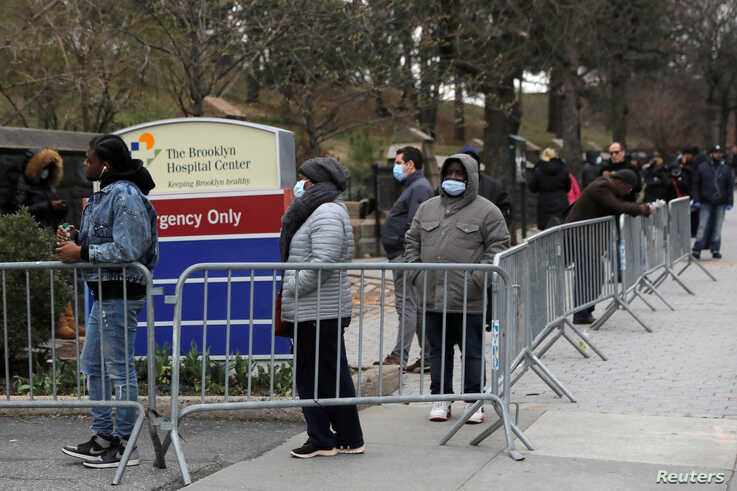 In New York CIty people queue to enter a tent erected to test for the coronavirus disease (COVID-19) at the Brooklyn Hospital Center in Brooklyn, New York. Photo: Reuters

New York — One gray day I wake up and hear a hard rain pouring down, and the sound of the wind howling through the trees. It’s the type of weather that only intensifies my melancholy mood. A state of mind caused by my being aware that I am frozen in place, and that time is passing by without experiencing the outside world for weeks except for a weekly mask-wearing visit to the town dump. I crave interacting with people — talking, arguing, reminiscing — and observing the daily street dramas that add flavor to my life.

But now I am isolated in a private cocoon that is only penetrated by dire and tragic news from a variety of outlets. The news allows me to reflect on how unequal the impact of COVID-19 has been on New York, and the rest of the country. Black people — only 12 percent of the U.S. population — account for 42 percent of virus-related deaths in the U.S. And in New York City, Latino residents are dying at the highest rates. These are the people who are still going to work every day, driving our buses and trains, cleaning our streets, stocking and delivering food and caring for our elderly, or who have lost their jobs and are no longer receiving government support and lining up at food banks.

The virus has arrived in a city like Detroit, one of the nation’s poorest and blackest big cities, a place where the incidences of obesity, asthma, diabetes and high blood pressure are all more than 50 percent above the national average. Of the statewide death count, 80 percent have been in the Detroit region. Wayne County where Detroit sits has more deaths than the state of California.

Detroit’s three major hospital systems, Henry Ford, Beaumont and Detroit Medical Center, struggle with problems that they have always confronted: a fragmented health care system, an underfunded safety net, and governments unprepared to deal with a crisis of this magnitude.

And Latinos across the US are disproportionately getting sick from coronavirus, in some regions being infected and hospitalized at up to three times the rate of white Americans. For example, in New Jersey, Latinos make up 19 percent of the population, but nearly 30 percent of the COVID-19 patients in that state are Hispanic. For many Latinos, the economic fallout from the pandemic is just as worrying as the health risks, leaving many with little choice but to risk their lives at frontline jobs. But unemployment has also disproportionately affected Latinos. In addition, Latinos have the highest uninsured rate of any racial or ethnic group in the U.S.

But there is no point merely listing the dire statistics. We know Trump, who doesn’t even pretend to care about how much suffering the virus has caused, has never been concerned about blacks and Latinos except to either express contempt for them or use them as scapegoats to rev up his base. And most of the craven GOP moves in lockstep with him, frightened they will lose their seats if they cross the vindictive and mercurial President. One gets the feeling that implicit in Trump’s push to open the country is an utter disdain for the lives of the poor (mostly minorities), who for multiple reasons (e.g., bad healthcare, overcrowding, structural racism) are at a higher risk of contracting the disease. New York may have suffered more than any other state, but it will never vote for him and is dispensable in political terms. (And the soulless Trump has little empathy for human suffering except his own.) Neither Trump nor his cohort will ever voice these sentiments, but one senses they are saying ‘screw them all.’

When the plague finally ends or hopefully before that point, we will be forced yet again to address the problem of economic and racial inequality in this country. (Nearly two-thirds of job losses are occurring among persons of color.) Stop gap measures will be needed in the interim, as well as a President with a transformative vision. I’m just offering well-meaning rhetoric, but it’s frightening that we inhabit a country where people live with such inequality and die in the same manner.