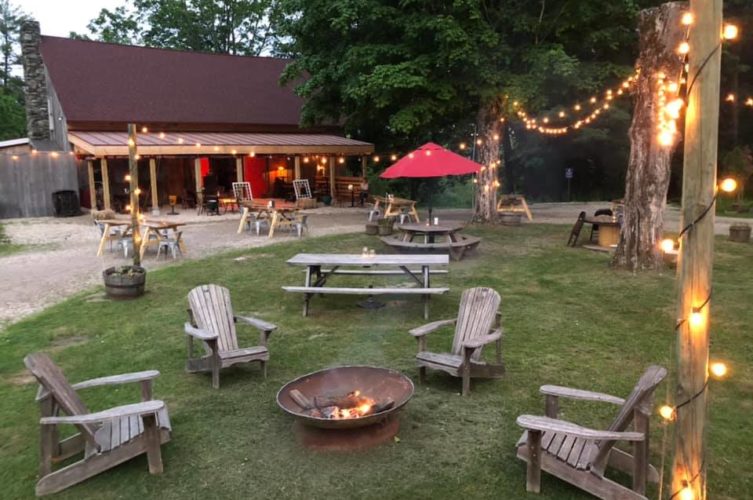 The outdoor area of the Barn where the audience will be. Musicians will perform under the overhang. Photo courtesy the Barn

Egremont — Downtown Egremont will be filled with the sounds of music for a few nights a week, thanks to the Egremont Zoning Board of Appeals, which voted unanimously Wednesday night to modify the terms of a special permit for The Barn, a popular bar and entertainment venue on Route 23.

The permit was originally issued in December 2015, not long before the venue reopened the following year. It allowed for indoor music performances but when the COVID-19 pandemic took hold in March, the Barn faced severe restrictions on its operations, which caused what its owners described as a “catastrophic” loss of revenue.

“The reality is these are very difficult times,” said Nick Keene, co-owner of the Barn, which was once the Robbie Burns Pub, a popular and rowdy honkytonk that closed in the early 1980s. By all accounts, the Barn has a much better reputation. Of the permit modification, Keene added, “This is critical to our survival.”

But when Gov. Charlie Baker issued Phase III guidelines for theaters and performance venues on July 6, he allowed some performance venues to reopen, but physical distancing requirements would have reduced the Barn’s indoor food service and entertainment capacity by 66%.

“Having outdoor music would make it possible for us to operate at our normal capacity — as per our entertainment offering — while following all guidelines,” Keene said in a written statement outlining his request that he distributed to the ZBA for its virtual public hearing held via Zoom.

See video below of the Egremont Zoning Board of Appeals public hearing on the modification of the Barn’s special permit on July 22, 2020:

Keene and his partner, Jenny Rubin, a stand-up comedian, said they have incurred a devastating loss of revenue, but they insisted their request for permission to hold outdoor music sessions was also for the community and for the musicians themselves, many of whom have been cooped up for months.

“People do need this,” Keene said. “The musicians need this. They’re one of the most overlooked groups of our time and they have no recourse.”

Attorney Ken Gogel, who represents the Barn, told attendees modifying the permit would serve to “to enliven the center of Egremont again during this very difficult time.” Keene also operates the Egremont Village Inn next door.

The new state guidelines set a 100-person limit for outdoor performance venues. That’s roughly the same number of customers normally allowed inside the Barn pre-pandemic. Phase III also mandates a 25-foot distance between performers and audience members, a requirement that the Barn’s outdoor space could accommodate.

With the 100-person limit for outdoor entertainment set by the state, the Barn is able to adhere to safety mandates during Phase III of the COVID-19 crisis that includes the 25-foot distance between singers and audience members and 10 feet between musicians, Keene told the board.

“It’s a serious restriction and it pushes our facility to the limit,” Keene said.

Each outdoor venue must monitor customer entries and exits and limit occupancy at all times to 25% of the venue’s maximum permitted occupancy, as documented in its occupancy permit on record with the municipal building department or other municipal record holder. But in no event may the venue admit or host more than 100 persons, the Phase III restrictions say.

Keene had sought to present “minimally amplified acoustic music” of no more than three performers every day of the week until 11 p.m. But he quickly added that he was open to negotiation.

Keene said the Barn has a unique property with large setbacks. The closest direct abutter is the cemetery. Keene has had a comprehensive analysis done by an audio professional showing the music he is planning is no louder than the sounds from road traffic on Route 23, a state highway. Musicians would only play directly outside the Barn under the building’s overhang, further mitigating any problems with sound, Keene explained.

“It would not produce any additional noise pollution,” Keene said.

Gogel presented an 18-page list of the comments of town residents, including abutters. Most were in support of the proposal. Click here to read it. Several of those supporters spoke in favor of the proposal at last night’s meeting. Great Barrington Selectboard member Leigh Davis also spoke in favor of the Barn’s proposal. Fast forward to 54:00 in the above video to review Davis’ comments.

In the end, the board and Keene agreed to modify the special permit to allow outdoor live music between 5 and 10 p.m. on Wednesdays and Thursdays, from 5 to 11 p.m. on Fridays and Saturdays, and from noon to 3 p.m. during Sunday brunch.

That modification will end Sunday, Nov. 1, when weather would presumably make outdoor entertainment impractical anyway. The applicant may later seek an extension without prejudice, depending on when Baker’s Phase III restrictions are lifted.