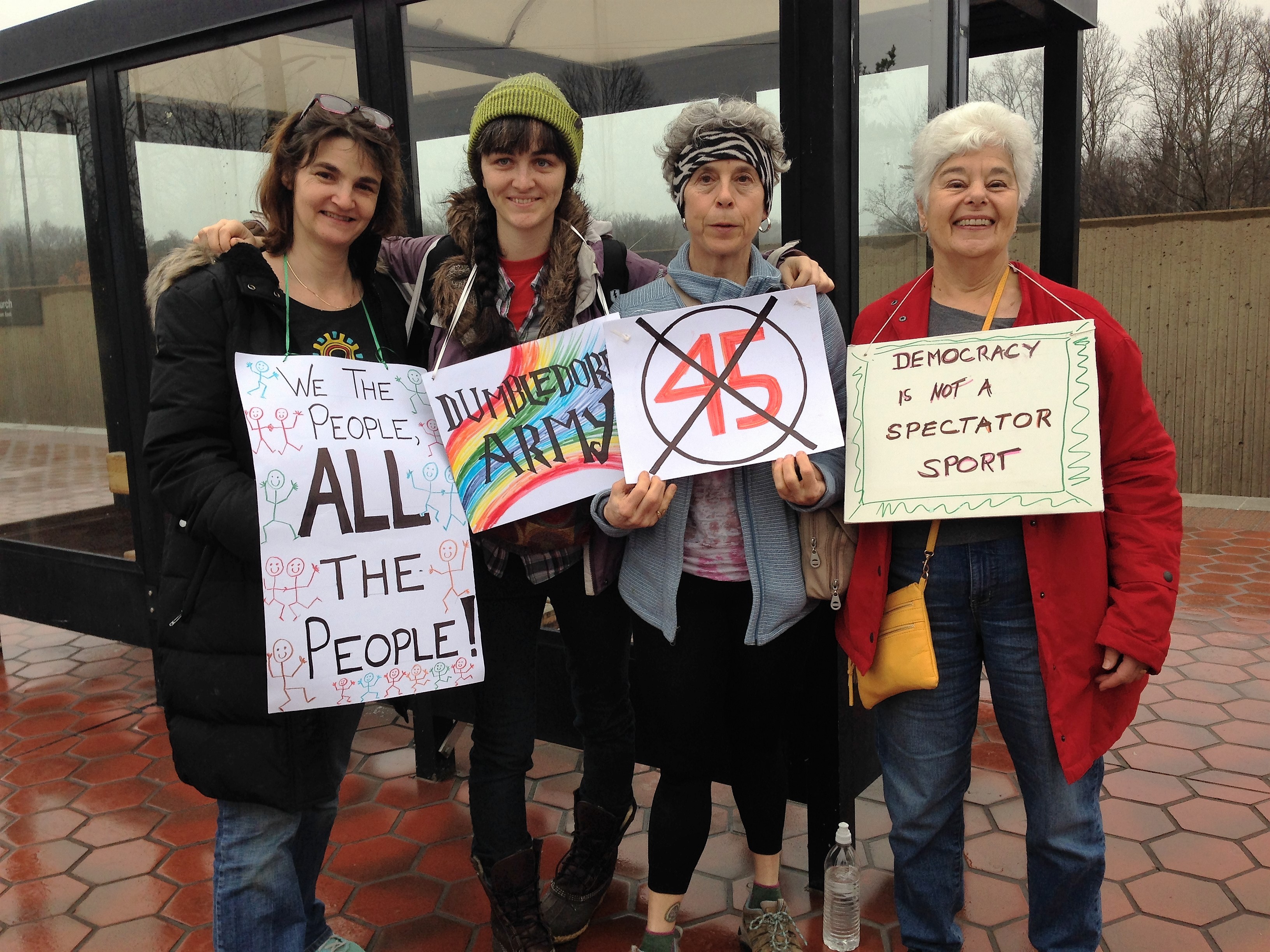 In the days after the November election, like most people I know, I was stunned. I went on about my life as if things were normal, but reality pierced my consciousness, often in the small hours of the morning. I quoted Scarlett O’Hara, “I will think about that tomorrow.” There were the holidays, and we simply spoke of other things.

I shaped my plan then. I would divide my life into three — not necessarily equal — parts. The first I now call Sanctuary. These are the times when I don’t speak or think about what is happening to my country. Perhaps I’m sitting by the fire, or skiing or chatting with friends. Maybe I’m working or dreaming.

The second is staying informed. I’ve always been a little sloppy about this — lacking the patience for the tedium of the news and not being able to sit still in front of TV. I’m still working this part out. PBS has been my first choice so far, but maybe BBC or even Al Jazeera. Even though I’m not there yet, I’m committed to staying informed beyond the somewhat random information provided by my friends on Facebook.

The third is action. So, on Inauguration Day, I headed for Washington, D.C., my hometown, with three other Berkshire women. 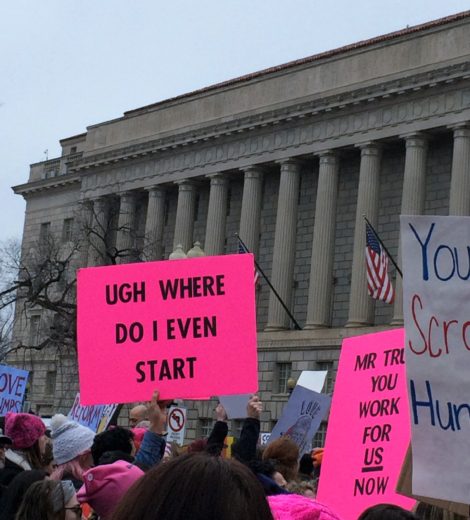 Where do I even start?

We spoke of other things during the long drive to our destination — Arlington, Virginia, just across the bridge from D.C. But from time to time, we discussed our placards. Independently, we had each brought poster board and marking pens, but none of us had found the words to put on them. When we arrived, we were still blank. After dinner, we brought out our materials and traded ideas. I knew I wanted to say something at a high level – something that would transcend all the issues. Then our hostess — who is the wife of a long-time career foreign-service officer — offered “Democracy is not a spectator sport” as the slogan for my poster. I’d heard the quote before. It resonated.

Anticipating large crowds, we planned to leave on foot at 8 a.m. for the Virginia Square Metro station, a little over a mile from where we were staying. A light mist was falling, and we were silent. I was slightly apprehensive. We had talked about the possibility of an agent provocateur, someone who would appear to be part of the crowd, but would instead cause trouble. We had not spoken of terrorism. And we did remind ourselves that we were from a quiet place and were unused to traffic and mobs.

A block from the Metro we began to see our compatriots — people with posters and pink hats. Many of them were leaving the station, which caused me some concern. But I decided they were boarding busses for easier transit to town. But as we went down the escalator and saw the throngs on the platform, I thought there might be another reason. There was a train stuck in the station — the door having been compromised by people pushing onto the train. Minutes passed and nothing moved except the escalator, bringing more passengers. Finally, without fanfare, the train pulled away. Some minutes later, another arrived, but it was full and no one boarded. Another and another. We had to do something.

We saw a few people going to the other side of the platform and concluded they were going farther away from D.C. in the hopes of catching an empty train back. “Let’s do it,” one of us said. Locals recommended the East Falls Church stop, where we disembarked and caught a train back toward the March. We even got seats. 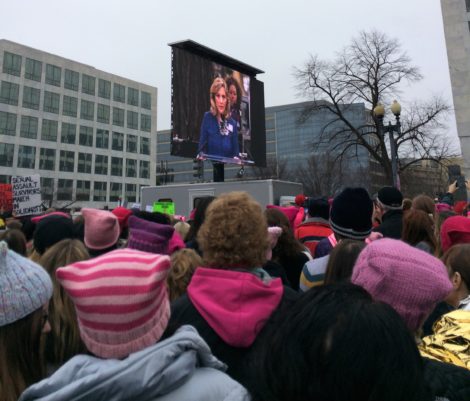 The speeches had begun by the time we made our way to Independence Avenue. Someone said there were jumbotrons on the other side of the street, so we headed there, pushing through crowds until we worked our way to Independence and 7th St., only to find that we could see, but not hear. And to realize that we were so tightly packed in that we literally could not move. Yet there was a sense of togetherness. Standing there in that tightly packed crowd, we were making history and were joined with hundreds of “sister” Marches around the world. (I later learned there were 673 of them.)

Then there was a medical emergency. Another young woman feared she would faint. Just behind me was a woman in a wheelchair, who seemed unperturbed that she was buried in a sea of people. The march wasn’t due to start for two hours, and I slowly began to realize that I needed to move. “You can’t,” I was told. “There’s nowhere to go.” But I saw a sign that said Evacuation Route, and I was determined to get there. Slowly, like a snake, our party pushed through the crowd, by now having picked up several others who saw movement and slid in behind us.

Free at last, we relaxed into the luxury of movement, walking away from the action, but able to finally appreciate the creativity and courage of the people who were there. A man asked if he could take our photo. He was from Ohio and at the March for his wife, who couldn’t make the journey. We read the signs and watched the parade of people from the luxurious comfort of a bench.

Then one of us needed to find a porta-john. We were told in advance there were plenty, but instead we found a long line to what looked like just a few. When we realized there were actually two lines, we surrendered our place to join a supposedly shorter line. “There are 40 porta-john’s on the other side of that building,” we were told by a passerby. We headed out, uncertain of the accuracy of the information or the exact location of this abundance. After pushing, like spawning salmon, through huge crowds headed in the other direction, we arrived on the Mall where we did indeed find large quantities of porta-john’s left over from the Inauguration.

Make your own parade route

We joined the Marchers on Constitution Avenue. The March wasn’t supposed to be there, but with so many people, spontaneity was the rule. At last we were marching. There was plenty of space and lots of signs to read.

We joined the official March at 14th and Constitution Ave. and stayed with it for several blocks. Then we filed onto the Ellipse, within sight of the White House. The open grass and extra space seemed both freeing and somehow apocalyptic. Then, as we got closer to the new President’s residence, we encountered barricades and the first real police presence of the day. And then it was over. Just like that.

Because Anne, who is a theater artist, was scheduled to give a talk at 6 PM, we stayed in D.C. The venue, The Dupont Underground, is a cultural organization committed to developing a multi-disciplinary platform for creative expression. They had invited a series of women artists to speak after the March, for reflection and strategy.

As I descended the stairs to the space, childhood memories flooded back. When I was growing up in Washington, trolleys were our main means of transport. Mostly above ground, there was one line that ran under Dupont Circle. That space, abandoned for many years, has been transformed into a cultural venue. Though a bit dank, it served well as a place to reflect about the day and to listen to artists discuss their work.

Overall, it was an amazing day. The sense of common purpose and collective grit was strong. Sitting on the wooden bench in the Underground, it was clear that only by channeling the excitement of the day and staying active would this enormous effort have any meaning at all.

Democracy is not a spectator sport. Each and every one of us needs to get and stay involved, no matter what our political leanings. There’s pretty universal agreement that if the momentum of the Women’s Marches is to have an impact, it will be at the local level. Here are a few resources.

IndivisibleGuide.com. A group of former staffers on Capitol Hill “want to demystify the heck out of Congress and build a vibrant community of angelic troublemakers.” The site provides resources for individuals to take action in Congress and work through local groups.

Four Freedoms Coalition. A diverse, non-partisan, Berkshires-based coalition united for freedom of speech and religion, freedom from fear and want, and against bigotry and prejudice.

Women’s March on Washington. The March website has 10 actions for 100 days. You can sign up to receive updates.