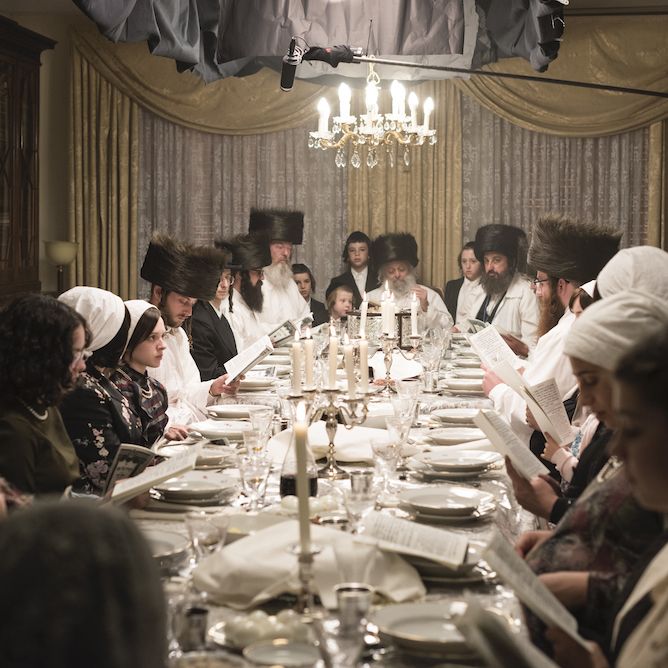 New York — Being isolated by the virus gives you a great deal of time to watch screeners, TV news and Netflix. Much of what Netflix offers is forgettable dross, or skillfully made genre series. But once in a while it carries a series or film that breaks the mold and provides an experience that touches a deeper emotional chord than merely passing the time.

Haas was a striking presence in “Shtisel,” an Israeli-made Netflix series that was warm and humorous, but also critical in its portrayal of a Hasidic family in Jerusalem. Still, the one character, a young Hasidic aspiring painter, who has problems conforming to all the religious strictures, remains committed to Hasidism.

“Unorthodox,” however, follows a different path. Its most emotionally powerful aspect lies in its depiction of Esty’s (Esther Shapiro) attempt to free herself from the rigid codes and roles prescribed by the Satmar sect that dominates her slice of Williamsburg. The Satmar are characterized by strict religious adherence, rejection of modern culture, and anti-Zionism. They also predominantly speak Yiddish.

There is not a touch of sentimentality in the film’s depiction of the world Esty rebels against.

The series opens with her leaving everything behind and fleeing her marriage to Berlin where her estranged mother lives with another woman. The series goes back and forth in time between her life in Berlin and her past in Williamsburg. Her grandmother and aunt raise Esty to conform to the patriarchal Hasidic notion of a woman-marry, take-care-of-the-apartment, have-a-number-of-children and subordinate-oneself-totally-to-one’s-husband’s-needs.

But she never feels at home in this prescriptive role and the insular community she has been raised in.  She does get married at 19 to a mother-dominated, sweet, but weak Yanky (Amit Rahav). But is dissatisfied with the marriage, and though Esty can’t quite articulate what she desires, she is looking to discover an alternative way of living that gives room for her to express her individuality.

The series handles the Williamsburg segments realistically without indulging in caricature. That’s especially true in a long detailed and striking segment capturing the traditional rituals and dances of Esty’s Hasidic wedding.

There is also a painful scene where Esty and Yanky finally consummate their marriage. Yanky is unable to offer Esty any emotional intimacy, caresses or concern about her sexual pleasure, for he has been programmed to believe that the main aim of sex is to procreate. To him Esty is less a person than a vessel.  “Unorthodox” carries a feminist thrust.

Besides Esty’s personal journey, the directors have added a chase narrative, which is of little interest. Given that the Satmar are opposed to people leaving the fold, especially a married woman who happens to be pregnant, they send Yanky and his renegade, and sleazy (a gambler, drinker and gun-toter) cousin Moishe (Jeff Wilbusch) to Berlin to track her down and bring her back. The cross –cutting between them and Esty as they pursue her adds nothing to the main theme of the series.

In Berlin Esty magically finds a group of Conservatory music students of all races, religions, and sexual preferences who embrace her. The students are barely individuated, but Shira Hass, with her expressive face, runs the emotional gamut between despair, tears and joy, and gives life to scenes that would have been dead without her.

The series reminds us in a scene where the group goes bathing in Lake Wannasee that in a villa on the Lake’s other side in 1942 senior Nazi officials met to plan the Final Solution to the “Jewish question” — the extermination of European Jews. It reminds Esty that being a Jew in a country that produced the Holocaust will always shadow her living in Berlin.

The film still contrives a too neat, happy ending for Esty. The Conservatory accepts her after an audition, when she soulfully sings a Yiddish song. Of course, everybody listening is deeply moved. Esty then is able to reconcile with her mother, gently rebuff Yanky’s attempt to save their marriage, and walk boldly into Berlin’s crowded streets to a new, liberated life. The constant shifts of emotion on Esty’s face help make the sentimentality of the series’ final scenes palatable, even stirring. “Unorthodox” is flawed, moving, and worth seeing.