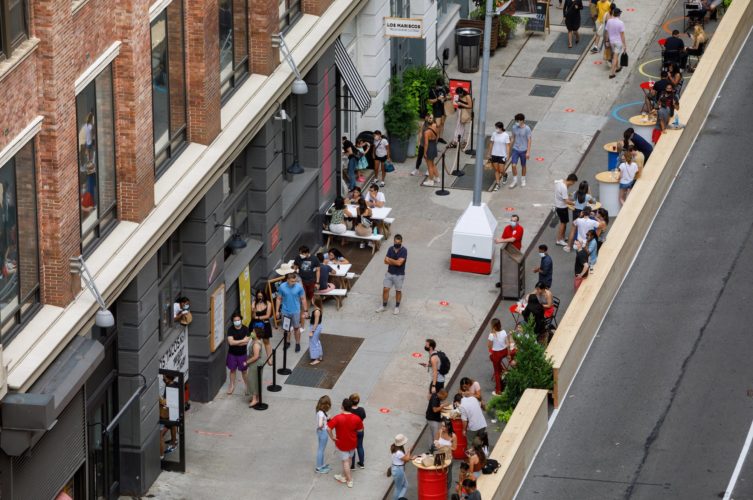 After half a year away, I’m returning to our Greenwich Village apartment in New York. I know I’m not going back to the city that often provides comfort and pleasure, but it’s still the place I want to spend my final years: seeing friends, walking its streets and directly experiencing either its decay or rebirth. The thought of walking past gated, shut stores that I once used, streets whose crowds and drama have thinned, a city whose services have been cut and whose unemployment is massive, and one devoid of my beloved movie houses and theaters makes me shudder. But it’s the city I love and feel most at home in. So I will return to sit and drink lattes at the outdoor cafes that are open, hobble about with my walker and take constant mental and written notes, observing both the city’s progress and regress, and hoping for the best, fantasizing that I will ultimately have a couple of years of living in a resurrected but somewhat unrecognizable city.

When thinking about America, it’s hard to avoid railing against Trump and his distortion and exploitation of the law-and-order issue, leading only to greater chaos and violence. But Biden seems to be capable to skillfully counter with his lethal rhetoric. So I prefer to write about a searing, pessimistic article sent to me by a friend, written by Wade Davis — a professor at the University of British Columbia in Vancouver. Davis, an anthropologist, has written the essay “The Unraveling of America” for Rolling Stone. His thesis is that COVID-19 signals the end of the American era. He sees it as “marking this era much as the 1914 assassination of Archduke Ferdinand, the stock market crash of 1929, and the 1933 ascent of Adolf Hitler became fundamental benchmarks of the last century.”

He knows that the pandemic has other deleterious consequences, including the long-lasting financial instability of the global economy, but for him its most “devastating impact of the pandemic is on the reputation and international standing of the United States of America.” For the first time, the international community has felt it imperative to send disaster relief to Washington.

Davis writes that after World War II “the United States with but 6 percent of the world’s population accounted for half of the global economy.” Those were years at least for the country’s white population, the working and middle class could own a home and car, and the affluence allowed for a truce between capital and labor, a time of economic growth and declining income inequality, marked by high tax rates for the wealthy.

At the same time, Davis sees that, more than any country, the United States in this time glorified the individual “at the expense of community and family.” Consequently, what may have been achieved in terms of mobility and a sense of well-being “came at the expense of common purpose.”

He writes how in our exultation of the individual we deny ”the very idea of society.” For what every successful democracy views as fundamental rights — universal health care, quality public education for all, and well-funded social safety net — have been dismissed as socialism by the Republicans.

Davis contrasts the U.S.’s handling of COVID-19 with Canada’s more successful performance, the reason lying in Canada having a “social contract, that involves stronger bonds of community, trust for each other and institutions like our health care system, with hospitals that cater to the medical needs of the collective, not the individual.”

Wade sees the U.S. as incapable of leading the world, for it has no sense of “benign purpose, or collective well-being, even within its own national community? Flag-wrapped patriotism is no substitute for compassion.” But he sees “the end of the American era and the passing of the torch to Asia is no occasion for celebration … In a moment of international peril, when humanity might well have entered a dark age beyond all conceivable horrors …”

One doesn’t have to see our future through as dark a lens as Davis does, and some even hope the Trump era is just a monstrous moment. But the cult-like support he has received, and the collaboration of the Republican Party with his every lie, corrupt practice and disdain for democracy inclines me to feel that Davis is more attuned to the future than those who hold that Trump is an aberration.