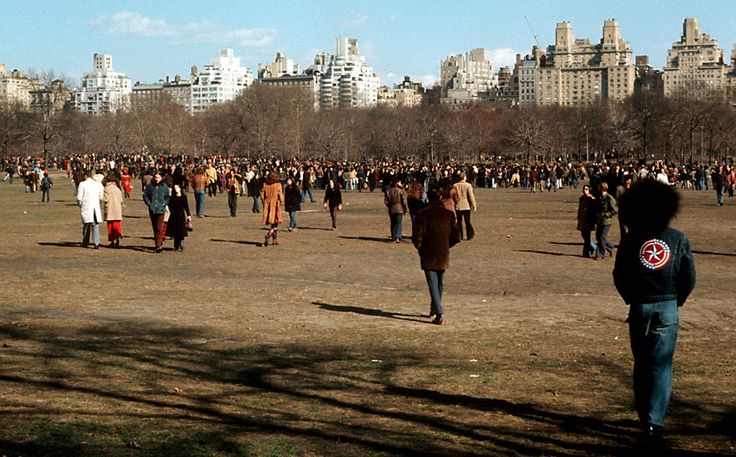 At seventy-nine this city that I have inhabited for close to eighty years is filled with memories. Despite the fact that the city is always in flux, and change, for better or worse, is the New York norm, there are places that still survive that invoke the past for me.

One day I walk past Central Park’s renovated very lush and green Great Lawn, and I remember the many years I played touch football and softball there. Then it was a Lawn whose grass was mottled or had disappeared altogether, and when it rained the Lawn turned into a sea of mud. In its deteriorated state (caused by the city not maintaining it), it still was serviceable, and I was a better-than-average athlete playing with different teams or in pick up games. It’s been many years, since I even tried to play ball, but I take great pleasure in those memories. I like to conjure up an image of myself once having a body capable of running, pitching, catching and pursuing the passer. It provided me then with a feeling that my movements were fluid and free, unhampered by physical problems and aging.

On another day we leave the Met Museum and walk a few blocks down Madison Avenue bringing back memories of when my wife and I walked there often. It was the 70s when the city was crime-ridden and filled with predators, and being on the Avenue allowed us to think there was safety in its wealth, and one could walk without the kind of anxiety that touched most of the city.

It was a more stable (fewer vacancies), less international and glittery Avenue then. The Avenue wasn’t as dominated by boutiques like Armani and Gucci—it was still expensive, and by 1968 Yves Saint Laurent had opened his Rive Gauche store on Madison Avenue. But the majority of stores were neighborhood ones–gourmet food, bakeries, drug and book stores–serving the well-heeled population of the Upper East Side. (Given that I then resented the moneyed– affirming much of the 60’s zeitgeist—my pleasure in walking along that avenue seemed hypocritical.) A few of those shops still exist in the area’s more residential section–Madison in the 80’s and 90’s–(e.g., the cozy Corner Bookstore), but clearly for much of the Avenue the future lies in boutiques like Christian Louboutin.

I have lived in the Village since 1968, but I have memories of coming down from the Bronx at seventeen to coffee shops like Café Figaro (our group’s hangout), and spending the evening talking about books we read, films we had seen, our existential malaise, and about the lives we were going to lead. I remember self-consciously playing at being a genuine part of the scene. I wore a heavy wool sweater, long plaid scarf, and left my hair uncombed. There were many people like us on those jammed, noisy streets that were filled with hangouts like the Kettle of Fish, Minetta Tavern and San Remo, where older more serious artists and folk singers like Dave Van Ronk who lived in the Village gathered.

Among the younger people some were merely voyeurs, others postured for a brief time–taking drugs, drinking heavily, talking hip– and then moving on to more domesticated lives. But there were others like myself, who were looking to live a more unfettered life. My hanging around those streets only lasted three to four years. But it contributed to my yearning for an alternate life to a conventional middle class one. I wanted to leave my parochial Bronx and take greater risks, care less about a secure future, and act out some of the wilder dreams I harbored.

I lived out only a few of those fantasies, but I did become a rebellious and student-oriented academic, who was both linked to the students radicals in the 60s, and involved in educational experiments that depended on breaking from traditional academic roles and educational notions.

Those Village streets today–Bleecker and MacDougal–still have some clubs that have endured like The Bitter End, and one coffee shop from the past, Caffe Reggio. But the bars, falafel joints and pizza houses that dominate those streets basically serve NYU students and young people from the outer boroughs and suburbs. And most of them show little outward sign of artistic or political ambitions or pretensions. Though it’s still livelier and more idiosyncratic than th e places they came from.

Recalling what these New York iconic places looked like is not hard, but remembering one’s feelings is much more open to distortion and misinterpretation. I try to recall my feelings when I moved through those places, and I’m sure that I do some unconscious editing, but I think I honestly convey the essence of what I felt.