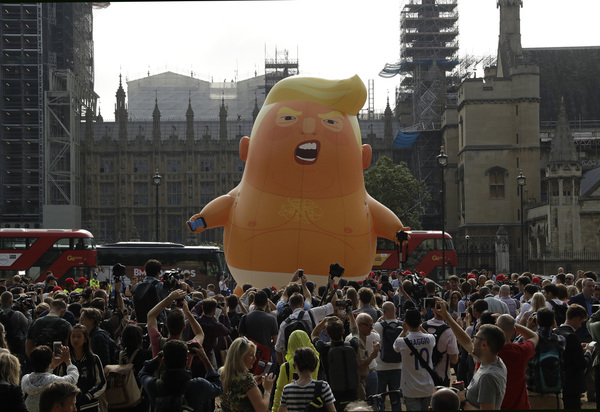 I have recently returned from my second city, London, for the 47th time. Over the many years I have closely followed the ups and downs of British politics — from Wilson and Thatcher to Blair and May — in The Guardian. So Trump’s visit to Britain has much greater emotional impact on me than his visits to other European nations.

In his usual coarse, tactless fashion before his meeting with PM May, Trump gave an interview where he praised her hard-Brexit supporting Party rival, the flamboyant and egregious Boris Johnson and stated that she had ignored his – Trump’s — advice on Brexit, a move he said threatens to scuttle a trade deal with the U.S. On Friday at a joint news conference with May at Chequers, he tried to dial back his criticism, by describing May (with his characteristic empty hyperbole) as a “terrific woman … doing a terrific job.”

His aggressive intrusion into British politics only heightened the anger of a large portion of the British public as thousands of protesters massed on London’s Trafalgar Square in a day of demonstrations against Trump’s first official visit to the U.K., while smaller protests took place in other parts of the country.

Organizers have claimed about 100,000 people showed up in London to protest. It included a blimp depicting an angry-looking Trump-like figure in a diaper; a cellphone sits in its right hand. According to a British poll, only11 percent of Britons believe Trump is a great or good president. But 67 percent, a vast majority, believe he is a poor or terrible president.

There are, of course, Trump supporters in Britain including the Murdoch owned tabloid The Sun. But in the London world I move in, just as in New York, I never meet them — the limits of my living in a bubble.

Still, I am heartened by the protests, and the responses of the marchers. One woman said: “He is the great destroyer. It takes very little time to destroy something which took decades to create and will take decades to build up again.” And Labor MP David Lammey said: “I don’t think any of us could have believed that a man full of such bile, such hatred and such evil would get his hands on what is at its best the beacon of freedom in the world. This presidency is worse than any of us could have ever, ever have imagined.”

For an instant the protests make me forget my revulsion with both his political agenda and his very being. Still, I know the next day and the next week he will continue to be in power destroying the environment, acting perniciously towardsimmigrants, minorities, and women, and tilting the Supreme Court for the next three decades to the right. So I will try to enjoy the moment and have one rare night of decent sleep, before I wake up facing the dark.