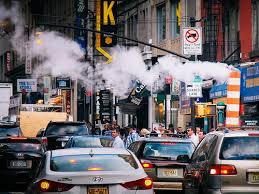 New York — A brisk, sunny morning in New York, and walking to my gym I am forced to circumvent streets closed by men with hard hats for the construction of bicycle lanes, new water mains, and pedestrian malls and seating. In the Village and its environs there are also new luxury residential buildings rapidly going up on every empty lot or gas station that is available — a quick profit for miniature Trumps. New York is a dynamic, vibrant city, but one whose constant clamor allows, at least in Manhattan, few moments of serenity. Some people love the din. As the comedian Lewis Black said: “I love New York City. The reason I live in New York City is because it’s the loudest city on the planet Earth. It’s so loud I never have to listen to what’s going on in my own head. It’s really loud.”

I am not endorsing cacophony for its own sake, but there are times the sheer decibel level of the city makes me feel alive. I sense then that I am moving about the streets accompanied by a type of atonal music. And like Lewis Black I also find there are moments I want to blot out what’s going on in my mind — repressing all those feelings and thoughts I have about myself and the larger world that I just don’t want to dwell on.

Later on the same day I travel uptown to a screening and pass the covered-in-scaffolding, Renaissance style, landmarked Art Students League building. The League had sold its air rights to the Extell Development Corporation for $31.8 million, enabling the construction next door of one of the tallest residential towers in the world. That’s nothing new in a city or a street (57th Street) where real estate is king, but nevertheless horrific to look at each time I walk by. It just reinforces my feeling that what the city’s big money developers desire they get — a reality echoed in the rest of the country as well.

I have some time to kill, and looking for a quiet spot to read and reflect I enter Central Park at Columbus Circle. The entrance is filled with hawkers, most of them immigrants for Central Park tours, rental bikes, and Pedi cabs. I walk into the park, and the first thing I see is that on a newly replanted, fenced-in lawn a homeless man has built a complicated lean-to, and I begin to imagine the man has some untapped potential. But I also recall a time when the park had turned into a refuge for the homeless, and drug dealers were omnipresent pushing their wares. It was then far from an inviting place, and except for weekends the park often felt barely used.

I walk a bit and find a bench to sit on, but it turns out to be not much of a respite from the city. The sounds of the street -– the hum of traffic and a variety of sirens — begin to surround me. The bench is also adjacent to a park drive, where I can see an endless flow of bikers, joggers, and tourists in horse drawn carriages. I shouldn’t complain, because the park is not meant to be a private preserve, but a welcoming public space that in the last two decades is used by more and more people for a wide range of activity.

But there are quieter spots nearby. Heckscher ball fields located at 63rd Street is much better place to find a bit of peace. Of course, that’s because there are no teams playing baseball and softball at the time I sit there. In the ’60’s I once played softball on its then badly kept, mottled fields. But now they are lushly green and well manicured, and a great many handsome shade trees surround the fields.  I see two men casually throwing a football, and a busker sings folksongs along the path. It’s a moment of relative repose, which Central Park can at times — and in certain spaces — provide. Even the intensely discordant and alive city has places to escape to.