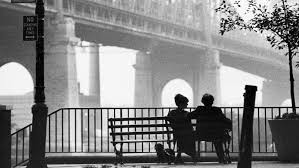 New York — I’m off to the gym in the early morning reading the Times on an exercise bike, and trying to complete my necessary 25 minutes before boredom sets in. Finishing my allotted time I slowly proceed the few blocks back to my apartment walking along with a stream of NYU students heading for class. I have promised myself to save this day for completing a column on the NY Public Library, but other thoughts begin to intrude.

I reflect on Trump’s daily raging tweets — an odious way to start the morning — and on the passage of the egregious tax bill with its horrendous giveaway to the moneyed, and finally on a more personal level, the impact of my neuropathy, whose symptoms always fluctuate unpredictably. But today I am willing to grant little thought to any of these subjects, giving up most of my time to reflections on a younger Woody Allen and the sexual politics of one of his best films, Manhattan, which I had written about and taught many years ago.

A number of years after the film Woody Allen’s life was roiled in controversy in 1992 over his affair with Soon-Yi Previn, the adopted teen-age daughter of Mia Farrow who was more than 35 years younger than him. The surreptitious relationship started when he was still intimately involved with Mia. It resulted in a scandal that became tabloid fodder — with Allen being condemned as a monster and predator by many — as it ultimately led to his marriage to Soon-Yi in 1997. (In addition, in 1997 Allen was accused by his adopted daughter Dylan of having abused her in 1992 when she was seven years old — something Allen has always strenuously denied without the charges ever disappearing.) In a recent interview with The Hollywood Reporter Allen claimed the scandal didn’t touch him at all. “I was immune. You can see I worked right through that, undiminished. Made films all through those years and at the same rate I was making them. I’m good that way. I am very disciplined and very monomaniacal and compartmentalized.”

Allen will probably never publicly deal with the painful and destructive aspects of his affair and marriage to somebody who was his stepdaughter, even if he sustained a seemingly stable marriage with her over the years. For he has successfully built a protective wall around him, and remains unwilling to permit anything truly revelatory to be expressed.

But what strikes me now is how years before this scandal in Manhattan (1979), his relationship with Soon Yi was prefigured. When I reviewed Manhattan more than 35 years ago for the film magazine Cineaste I praised it along with other New York critics, among them a former Allen skeptic Andrew Sarris, who was converted into a gushing true believer.

I found Manhattan exhilarating in the striking images it used in its opening homage/montage to a romanticized black and white borough — especially at a time when the city was suffering from economic collapse and rampant crime. The montage was then a consoling antidote to a city in constant turmoil.

But what I want to center on is not the film’s formal strengths, its witty one-liners, and often penetrating social satire of pseudo-sophisticated, name-dropping Manhattanites, but Isaac’s (Allen) relationship with his 17-year-old lover Tracy (Mariel Hemingway). Tracy attends a progressive private high school (Dalton), and seems healthy, open and uncomplicated, especially in contrast to his age-appropriate lover Mary (Diane Keaton), who is a mixture of trendiness, insecurity, and self-destructiveness. (e.g., Isaac’s apt description of Mary — “her self-esteem is a notch below Kafka’s.”) Isaac and Mary seem to be a well-matched pair of neurotics.

But Mary is too neurotic to stay committed to him, so her behavior allows Allen to invidiously compare her to the callow Tracy, at first portrayed as an unformed not very sophisticated girl, who supposedly provides a passing, comforting sexual connection, but by the film’s conclusion is depicted as more mature than her years — the one woman who can love and accept love. Allen seems to need a certain amount of self-deception to turn an essentially intelligent but blank girl/women into somebody that through his fantasies can help justify his relationship — though in the film it comes too late to save their connection. Still, Tracey is all of 17, and though I didn’t see it with sufficient clarity then — in the light of the many recent revelations of male behavior that range from the inappropriate to the predatory from Franken to Weinstein and Moore — Isaac’s relationship with Tracy now truly makes me uneasy.

The relationship between them may be consensual and Isaac does try to tamp down the intensity of her feelings towards him, but their liaison can’t avoid disturbing the viewer. Every time I look at the film, I see an affair between father and daughter, or one between a somewhat dirty old man with a young, cute girl, whom he’ll only end up hurting. It clearly fits into Allen’s later romantic choice, which is built on his need to shape the personality of a very young woman, and by his own lights a very benign, even admirable act:

Allen has explained that: “Soon-Yi had a very, very difficult upbringing in Korea: She was starving as a six-year-old. And she was picked up and put in an orphanage. And so I’ve been able to really make her life better. She’s educated herself and got a college degree and went to graduate school, and she has traveled all over with me now. She has just become a different person. So the contributions I’ve made to her life have given me more pleasure than all my films.”

Allen portrays himself here as father/teacher, and a nurturing Svengali. Without denying that he probably was a positive influence on her life, we should still be wary of the way he sees his own role. There is something controlling and condescending in his paternal persona, something even passive/aggressive in his behavior. None of his behavior prevents me from still taking pleasure in the film nor does it blur the distinction between the film Allen has directed and written, and the life he has led. That’s not always easy for the viewer to do, but I think is an imperative.

But I have been thinking about a review in a recent New York Review of Books by Laura Kipnis that asks: “Is the man who won’t stop talking about sex (like Allen in many of his films) a man convinced of his power, or one who’s desperate to impress you with his prowess?” Obviously, the latter description fits Allen, and there is much pathos inherent in that need.

But there is a big step between insecurity and desperation, and predatory behavior. Being creepy is not the same thing as being predatory, and somehow the lines have to be drawn.

I am glad that we may see a day when in Kipnis’s words, “men will see women as full-fledged human beings rather than ego salves and receptacles.” That time clearly hasn’t arrived, and meanwhile the society will blunder on sometimes conflating the relatively innocuous with the truly guilty. I know the behavior is all part of a piece of men asserting their control, and a cultural change redressing these patterns is a necessity. But some men will be unjustifiably sacrificed as distinctions get blurred, and institutions rush to demonstrate they are on the side of right.