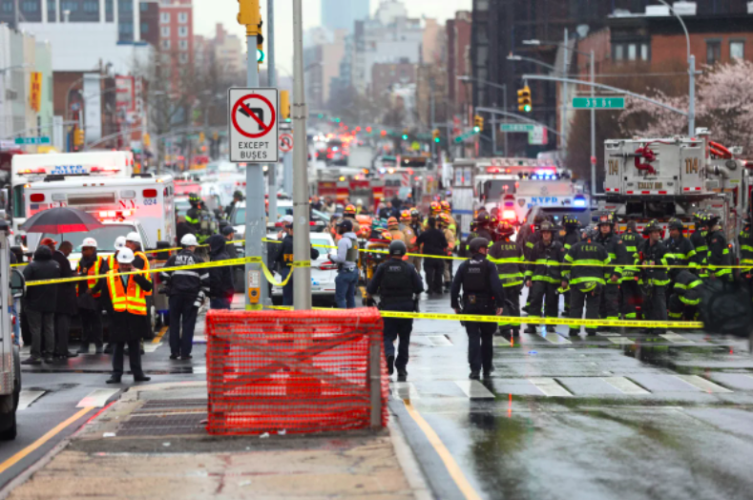 Law enforcement gather near the entrance to a subway stop in Brooklyn on April 12. Photo: Kevin Hagen / AP

I know I have written about urban crime a number of times in the past, but the violent Brooklyn subway attack by a raging, ranting sociopath moved me to write about the subject again with greater urgency.

The Brooklyn incident was a more sensational variation on the crime wave that has hit New York and other American cities in the last couple of years. For example, the city recorded a 41% increase in overall major crime in 2022 compared to the same period last year, including a nearly 54% increase in robberies, a 56% increase in grand larceny incidents, and a 22% increase in rape reports—with a large majority of the violent crimes occurring in a small slice of the metropolis.

Other cities have had to confront similar experiences, with Philadelphia enduring 100 homicides by March 11 of this year, and Houston recording 103 homicides through March 16 within its city limits. Similar numbers of violent crime increases can be found in most major American cities.

New York City Mayor Eric Adams was elected primarily because he was an ex-cop who was tough on crime. But he has also tried to establish, as one writer wrote, “a fine line between proactive policing, precision policing and not marginalizing people that are already marginalized.” Adams has stressed that high crime areas have already suffered the most — both in lack of economic opportunity and increases in crime. But after 3½ months, plagued by a string of high-profile violent incidents culminating in the terrifying attack on Brooklyn subway passengers, the public’s patience may be wearing thin.

A frustrated Adams himself has given vent to his inability to stem rising crime by angrily addressing the issue: “Here is the question that I put out to the city: I thought Black lives mattered. Where are all those who stated Black lives matter? Then go do an analysis of who was killed or shot last night. The victims were Black. Many of the shooters were Black.” The mayor went on to ask, “Why are 16, 17, 18-year-olds out on our streets armed with guns at 12 or 1 a.m.?” He was responding particularly to the wave of shootings that followed the subway attack.

Adams, not given to nuance at the best of times, was in no mood to pose the question with any subtlety. Clearly, Black Lives Matter is not responsible for the street violence nor does it have the power to marshal the spiritual or physical force to quell it. But the question remains — why murder and non-negligent manslaughter victims in NYC in 2021 were most frequently Black (67.0%) and secondarily Hispanic (23.7%), while white victims accounted for only 5.9%. The race/ethnicity of known murder and non-negligent manslaughter suspects mirrors the victim population, with Black (63.9%) and secondarily Hispanic (28.5%) suspects accounting for the majority of suspects, while white suspects account for only 4.8%.

It’s not that the Black inner city remains passive in response to the increasing violence and crime. The reality is, in neighborhoods and cities across America, there are countless organizations, activists and movements dedicated to curbing violence in Black communities. The number of Stop the Violence marches dwarfs the demonstrations against police brutality. Unity rallies and peace picnics happen every day.

But still, most of the Black writers and commentators who appear in print or on television either don’t deal with the problem or explain it away in terms of the pandemic or poverty and racism’s destructive force. The difficulty with those explanations is that, while they carry a certain amount of truth, they are not adequate for those people who have to live daily with the danger and consequences of violent crime on their streets, or for the city in general.

John McWhorter, a Black Columbia University linguist who is seen as a conservative by many other Black intellectuals and activists, has written: “This high indignation about one white cop doing a terrible thing looks incongruous given that in these same communities, hundreds of Black men are killing each other every summer.” McWhorter is not a conservative, but a political moderate who has been embraced by some white right-wingers. In fact, he praises Black Lives Matter for making a difference in inner city communities because it understands the possibilities that social media offers in calling out the police.

Still, he writes that challenging police brutality and violence should be taken on simultaneously with confronting, in a more public and aggressive way, Black-on-Black crime. One of McWhorter’s proposals is that greater trust should be forged between Black communities and the police. That’s fine, but it’s only a well-meaning sentiment unless, in McWhorter’s words, ”transformations occur because of a phase shift in general awareness that becomes impossible to ignore and generates further action.” These changes in consciousness have occurred in the past, when MLK and the civil rights movement were in its heyday, but have not yet happened among Black residents’ relation to Black crime in the Black community, despite the constant barrage of mass shootings and street crime in the last couple of years.

McWhorter doesn’t deny the existence of systematic racism as one prime cause of Black-on-Black crime, but feels a conscious and direct attack on Black criminal behavior is imperative. A diminution of Black-on-Black crime would make all our lives better, especially the daily lives of inhabitants of the inner city. It would also make it much easier to garner Congressional  support for a range of social-change legislation like affordable housing and greater subsidies for public transit.