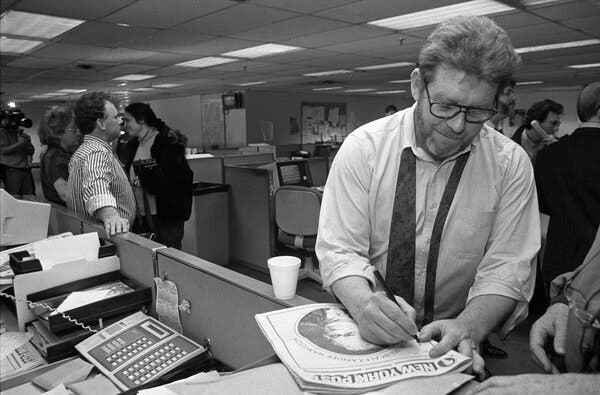 I’m now 80, and I started reading Hamill in 1960 when he was a reporter for the then liberal New York Post. His voice — street-wise, evocative, and sometimes lyrical was from the beginning a distinctive and powerful one. His descriptive prose at moments seemed richly novelistic.

Later, I used to Xerox his columns and articles when I taught courses on urban problems and American society at CUNY’s branch on Staten Island, where the majority of the students were the sons and daughters of the white working class. Hamill’s writing understood the city’s then large ethnic white working class (the late 60s/early70s), without ever romanticizing them.

In those volatile years, his writing was more trenchant and empathetic about the racial resentment and growing alienation of the Nixon- and Wallace-supporting, white working class than anyone else’s. He wrote: “The people I’m speaking about are the working class. That is, they stand somewhere in the economy between the poor — most of whom are the aged, the sick and those unemployable women and children who live on welfare — and the semi-professionals and professionals who earn their way with talents or skills acquired through education.”

Throughout those years Hamill’s writing never displayed any sympathy for the working class’s pro-war, anti-Black political positions. But he avoided the facile contempt that most people I knew on the Left exhibited towards blue-collar workers, Hamill saw “the working-class white man as someone in revolt against taxes, joyless work, and what he considers the debasement of the American dream.”

Hamill may have had a sentimental streak but he could be bluntly honest about the city’s unraveling in the late 70s when fear took over its streets. He saw the city’s streets as filled with “young men who had never been children,” and though knowing how poverty and racism shaped them understood they were a threat to the day-to-day existence of the Black community, as well as the city’s.

I never met Hamill, but two of his brothers were my students and they were better read and more confident (sometimes too much so) than their peers. Emulating their brother, they had already defined themselves as writers, and they were a pleasure to have in a class, which analyzed American fiction’s relationship to society and politics.

A few years later, the city in precipitous decline, and facing a cataclysmic fiscal crisis, Hamill wrote an essay, “Notes of a New York Nationalist,” in which he damned those who had given up on New York. He saw himself as “a full-blown New York nationalist” and proclaimed that his country is New York and if you’re “to exist here, you must begin with a sense of embrace.”

Of course, those words struck a chord with a fellow city-lover like myself, and I remember reading Hamill’s “Downtown: My Manhattan” (2004 ), a very personal mixture of history, memoir, and an elegy to downtown Manhattan. The book not only contains a great deal of vivid descriptive prose, but Hamill also thoughtfully reflects on the city’s essence.

One theme that runs through the book is the power of nostalgia, which Hamill has always had a poignant weakness for (e.g., the Brooklyn Dodgers, stickball, Mello rolls). He writes that every New Yorker yearns for an earlier city, and that he “aches for certain places and times, and people.” And that nostalgia “involves an almost fatalistic acceptance of the permanent presence of loss.”

I know for myself that’s always true. I can still remember almost every block of the prosaic Bronx neighborhood that I inhabited the first 20 years of my life. It’s a world I passionately wanted to leave, but still feel pain today that what the neighborhood felt like — the markets, schoolyards, libraries, parks and human interactions — can never be recovered except in memory.

Hamill’s best book, “A Drinking Life” (1994), perceptively and honestly dealt with his alcoholism. From his father he learned how seductive saloons could be, and Hamill drank his first beer at 10: “For all of us, boys and girls, drinking was natural. It was also woven together with sex.”

Drink didn’t provide solace for Hamill, but turned “the world into a grand confusion. When I was drunk, and my mind couldn’t do what I wanted it to do, I went home. I would lie alone in the dark, feeling that I was a character in a story that had lost its plot.”

But at 37 he had the strength of character to quit and go cold turkey.

For a working-class, Brooklyn boy, who was a high school dropout, Hamill lived a pretty cosmopolitan life. One where he became a friend of Robert Kennedy and Jack Lemmon and dated women like Jackie Kennedy and Linda Ronstadt, and lived with Shirley MacLaine, Still, he never forgot where he came from.

He also lived in Dublin, Barcelona, Mexico City, Saigon, San Juan, Rome and Tokyo, covering stories and writing fiction. In 1986 he married Japanese journalist, Fukiko Aoki, who with his two daughters from a first marriage survive him. For a number of years he lived in Manhattan, but recently had moved back to Brooklyn where his heart and roots lay, and died in the same hospital he was born in. Hamill was a great tabloid journalist, who wrote tough, smart, and sentimental columns and articles. I will never forget him.