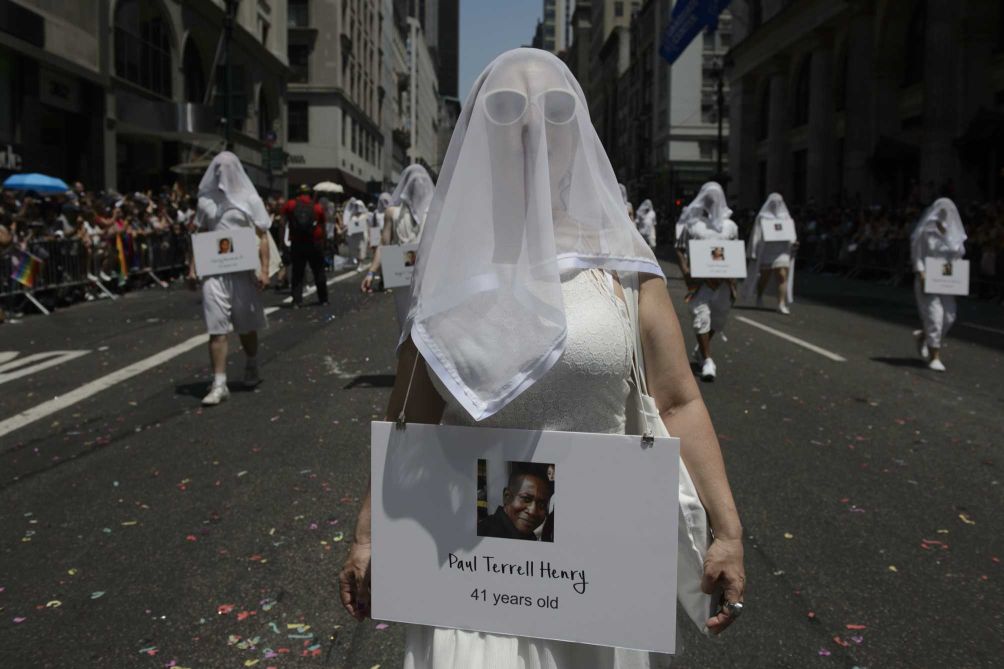 New York — On a warm, sunny Sunday I attended the 60th alumni reunion of my high school graduating class in a hotel a block away from where the gay pride parade was taking place. I had a difficult time reaching the hotel as the streets were clogged with floats, marchers, police providing heavy security, and crowds of supporters and onlookers watching and roaring affirmation behind steel barricades. The march has been held every year in New York since 1970, but this June the mood was more subdued because of the horrific massacre in Orlando. The lead float in New York’s parade was dedicated to the Orlando victims. In addition, a group of 49 walked silently side by side, wearing all white with photo profiles hanging around their necks, representing those who were shot and killed in the Orlando mass shooting. 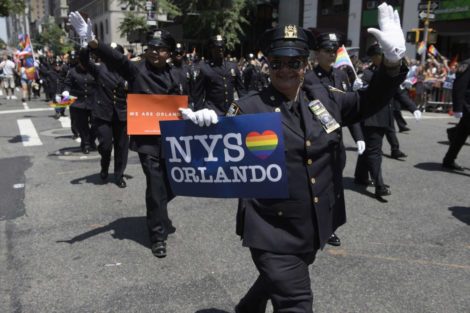 Still, despite the parade’s somber aspects, most of the people on the floats, some in flamboyant costumes, waved rainbow LGBT banners and danced to songs like “Y.M.C.A.” and “Born This Way.” It felt like an expression of joy in this moment of communal solidarity and love, and a collective statement that they refuse to surrender to hatred. Among the marchers were gay cops and fireman, and there were floats carrying corporate logos like Coca-Cola, as well as those from schools and other institutions. Politicians like Clinton, Cuomo, and De Blasio also joined the march -– a political necessity. But I don’t want to sound cynical. For I’m sure in their cases their participation was based on conviction.

Walking past the march, I felt at one with their goals, and emotionally moved by the parade. But I was also acutely conscious of my age, and the lessening of my physical energy. Most of the marchers were young and vital. In fact, a number of the supporters and marchers were just teen-agers, and many were black, Hispanic and Asian. It foretold a future where, at least in large cities like New York, being gay would become totally acceptable. And, though I’m doubtful that a true multiracial society, free of racism, will as readily take place, the young clearly are more willing to embrace it than older generations. I am normally pessimistic about the nature and future of American society, but the march made me feel, for the moment, optimistic.

After wandering in slow motion for a half an hour through immense mobs of supporters where one could barely move, I finally stumbled into hotel where the alumni reunion was being held. The last high school reunion I attended was in 2006. In an essay I wrote then, I expressed my wariness about attending it. I had always felt out of place in high school. It was an elite public institution — the Bronx High School of Science — and I was singularly disinterested and devoid of any talent in science and math. More importantly, I was still too bound up with the life in my old Bronx neighborhood, racing back home after my last class to catch a few hours of ball playing in the waning light. In retrospect, I understood that back then I had sought safety in familiar rituals, since I wasn’t emotionally ready for new experiences and needed to protect myself. As a result, my high school memories were more blurry and vacant than vivid and full.

But the reunion in 2006 turned out to be pleasant if not revelatory. I ran into a number of women who went to junior high school with me, and given that I love nostalgia I reveled in our shared memories — though there were some painful pieces of my past that were resurrected that I didn’t want to recall.

But this year I felt no unease. I had written a piece about my Bronx childhood for a literary magazine and sent it out to the alumni before coming. It gave me an instant connection with some people I had only known in passing. I met one man who lived on my street, but had graduated two years before, and we began to animatedly talk about other people who had lived on those blocks, the look of the buildings, and the dynamics of his family.

This wasn’t a place to exchange personal intimacies, but the talk flowed. I learned things about the lives of my fellow graduates that deepened my perception of them. They were a complex lot, pursuing a variety of careers — some with great success.

I began to remember how tense and uncomfortable I was when I entered high school, and how today at the age of seventy-six (flawed as I may be), I am finally at ease in my own skin.