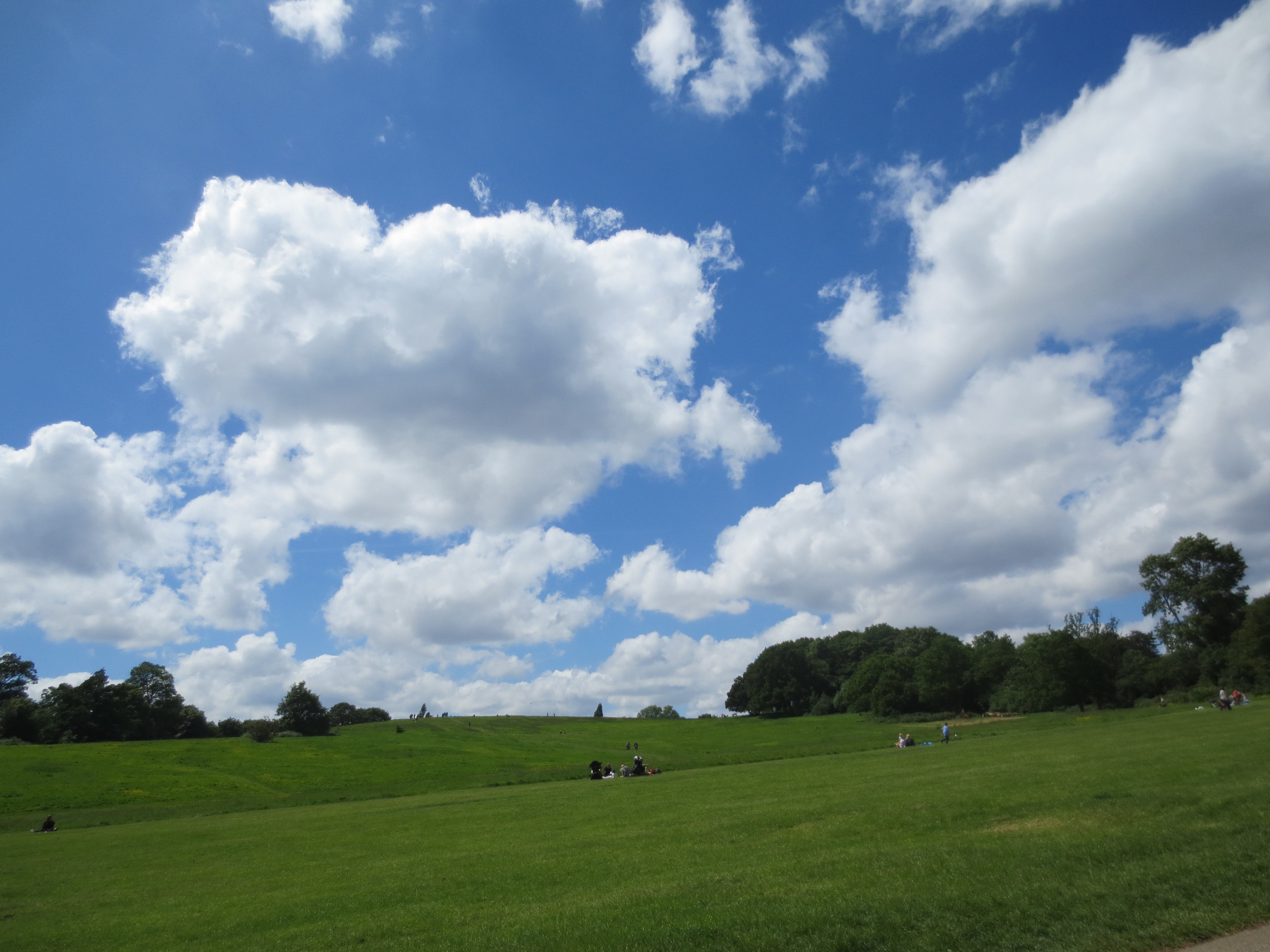 Hampstead is an alluring, hilly area of London just 4 miles northwest of Charing Cross and the city’s center. In 1972 I went with my wife and our infant daughter to live in London during our sabbatical year, and luckily found an apartment in Hampstead.

It was then a generally intellectual, liberal, artistic, upscale neighborhood with some cheap bedsits — rented single rooms with bathrooms — where economically marginal people often in the arts could live, but there were also expensive, modern, Victorian, and Georgian houses as well. Today, most of the bedsits are gone, and the area has a number of millionaires residing in the neighborhood. Upscale chain stores, including many boutiques, dominate the High Street that once had many small independent arty and idiosyncratic shops that were rooted in neighborhood life. The High Street still remains attractive, but generally devoid of character and particular interest.

But the streets, lanes, and passageways leading off the High Street and Hampstead Village remain as they once were, a few with stone staircases leading to charming pubs and historic houses, and others like the pedestrian alleyway Flask Walk still containing unique shops like a second hand and antiquarian bookshop and an unreconstructed Victorian pub. Spending an afternoon in the Village, I walk to take the tube home along Well Walk– a tree-lined street with a good pub — The Wells — that leads directly into the glorious Heath, which includes the first Hampstead house that John Keats lived in and other notable houses that I have always found captivating and cheering.

On my last day in London I return to the section of Hampstead where my most powerful and indelible London memories were shaped — South End Green and the Heath. South End Green lies about a 10-minute walk downhill from the top of Hampstead Village. It’s nestled along the edges of the Heath, and contains many small shops — a fruit cart, a bookshop, a frame store, a bakery, and innumerable coffee shops. The only big change in the Green from when we lived there was the replacement of the local movie theater with a large, functional Marks and Spencer food store.

South End Green is where I shopped for food, bought the Guardian and had my coffee each morning. It obviously lacks the grandeur of Paris’s Boulevard St. Germain or London’s King’s Road, but my remembering has turned this somewhat quaint but everyday shopping area into a more luminous and vivid place than it is in reality.

After having a coffee and toast there I leave for a walk in Hampstead Heath — an ancient London park that covers 790 acres (much of it wild) that I had spent years exploring, and that at times appear in my dreams as a paradisiacal place. It’s a greenspace that is rambling and hilly, and filled with ponds, woodlands, lanes and meadows. It even has an outdoor public swimming pool, an adventure playground, a running track, a cricket ground and tennis courts.

I set out passing the forever serene ponds filled with ducks and a few swans, and people walking dogs, and women pushing strollers, and then I try something more difficult — climbing Parliament Hill — one of the highest points in London. Yes, it’s merely a hill where families picnic and fly kites on weekends — not Mount Everest — but given my neuropathy I feel that I have accomplished something by reaching the top.

I then sit down to rest on a bench looking over at London’s chaotic skyline, where I can make out landmarks like St Paul’s Cathedral, and new office and hotel towers like The Shard — I become involved in a conversation with a soft-spoken, binocular-carrying birdwatcher. He turns out to be a landscape gardener, and we talk briefly and easily about Hampstead’s inflated housing prices, landscape gardening, his wife’s work in films, and, of course, the ever-present, monstrous Trump.

Our conversation ends and I slowly descend the hill to meet old friends who join me on the over a mile walk across the Heath to Kenwood for lunch. Kenwood is a former Regency stately home with a pillared portico and many classical details. We start our walk past more ponds, and then through open meadows with large fallen trees where we watch children climbing. We walk through a path in a dark wood (that if I was a child I would imagine magical). When we come out into the light we observe in the distance the white, majestic gleaming Kenwood House looking out over a lush green sloping lawn and a lily pond — an image that still can move me, despite my habitually returning to the same site every year. Kenwood also has the added attraction of housing Old Master paintings — a great Rembrandt self-portrait, a Vermeer and a Turner.

The day ends with our eating lunch outdoors at Kenwood’s modest café, and then walking back across the Heath to my bus.

My final London day’s walk through South End Green and the Heath provided no new revelations. What I experienced was utterly familiar, but remains profoundly stirring. I have always gained infinite pleasure reliving my London past, and this time was no exception. It was heightened by the fact that though I am a thoroughly urban person, I love parks that at their best establish an organic relationship between the city and the natural world. To my mind, the Heath seamlessly does just that, and left me again with memories of my London trip that I will long cherish.