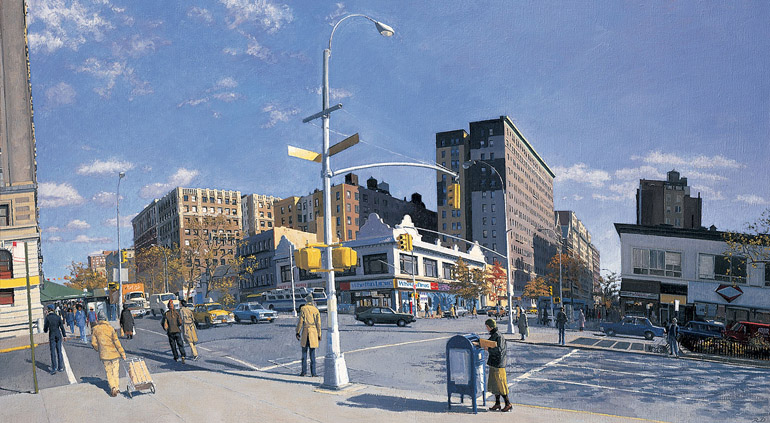 I have taught and written about film for most of my work life, and have run classes in American fiction from time to time. But I have never felt I knew enough about painting to teach art history or write critically about painting. Still, my wife, who is a painter, and I visit a great many museums and galleries. And over the years, I have begun, instead of focusing on subject matter, to look, with her help, more closely at the texture of paintings and their use of color, space, line, light and shadow. However, if I know and see more now then when I began going to museums over 60 years ago, I remain a work in progress when it comes to profoundly responding to painting. But recently we attended the annual Armory show at the Park Avenue Armory organized annually by the Art Dealers Association of America. It’s a show that allows one to talk to gallery directors like Betty Cuningham (her gallery is located at 15 Rivington St. in New York City), who exhibited paintings by Rackstraw Downes in her Armory space.

I have seen Downes’ work before at the Whitney Museum of American Art, but rarely more than one painting here or there. He has painted landscapes in Maine and Texas, and interiors (his studio) on a panoramic scale, but he is best known for his New York cityscapes. And I have a special interest in cityscapes.

His paintings would best be described as realist with his sustained, meticulous and intensive outdoor working process, and paintings that draw attention to what is characteristic of the 21st-century cityscape. He does not paint what is conventionally beautiful, but the everyday world we inhabit.

Some of his paintings center on a four-block range with the Columbia Presbyterian Hospital on the right, and the overpasses and on- and off-ramps from the George Washington Bridge on the left. It’s far from a prepossessing scene, but it demonstrates, in Downes’ words, that “almost anything becomes a composition and a possible motif. The longer you look, the more you see.”

And it’s true those ramps and overpasses, which I have passed by countless times going up to the Berkshires, must be looked at with a fresh eye to perceive at least a scintilla of what Downes sees. Looking at his painting closely, I see the curvature of the ramp, the columns holding the overpass up, the range of muted colors, and the complex network of shapes that fill the painting.

Downes is a fine painter whose vision can’t be picked up at a cursory glance. I’m glad that I have learned to see more, but clearly I have merely skimmed the surface.