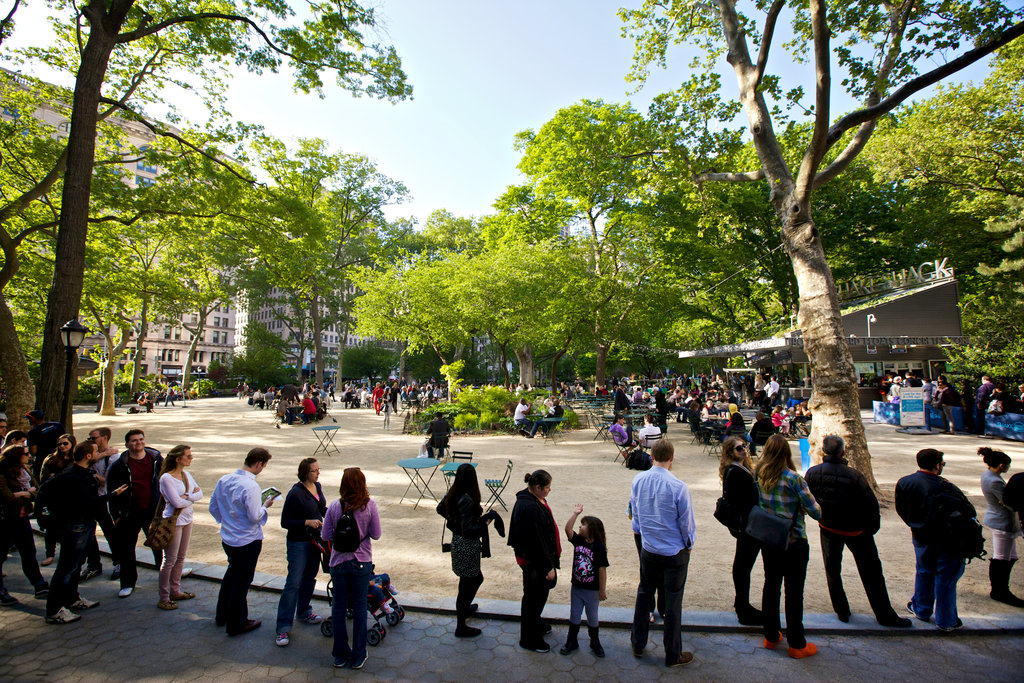 Back in New York for a week seeing doctors, and trying to take advantage of the usual urban pleasures despite the wilting heat. Walking about the city I’m struck how comparatively clean and serene for NYC it is compared to the city during the ‘80s, when in the summers it resembled a version of a less impoverished Calcutta. Then, the clammy, oppressive weather, coupled with the garbage-laden streets and the sense of menace from the continuous sound of police sirens and fire engines and the threat of drug dealers skulking ominously in corners, made even a city-lover like myself feel New York had turned into a version of purgatory.

But it’s a different city now. One evening this week my wife and I leave a film screening, and take a walk in Madison Square Park, which lies between 23rd and 26th St, and between Madison Avenue on the east and Fifth Avenue and Broadway on the west. I have memories of the park when its benches were broken and it seemed the only people using it were the addicted and the homeless. However, the renovation of the park, completed in 2001, turned it into a graceful, city attraction. In our eyes, the park has been stunningly reconceived.

The park that night was filled with people, families with children using a playground with creative and colorful equipment, a dog run, public art, lush flowers like hydrangeas, and echinacea, a large grassy area, and the Shake Shack. The Shake Shack, is an extremely popular permanent stand that serves hamburgers, hot dogs, shakes, as well as wine. It’s crammed with young couples sitting at tables (that rest on sand not concrete) eating and drinking.

Anywhere one sits in the park one obtains a great view of surrounding architectural landmarks like the Metropolitan Life Tower and the Flatiron Building. And the neighborhood surrounding the Park has boomed, transforming a number of office and commercial buildings into residential ones and changed the area’s aura. On 23rd and Madison a 60-story luxury tower has been constructed, topped by a 6,850-square-foot triplex penthouse with a 586-square-foot wraparound terrace. It is an egregious display of wealth, and it means other buildings of its type will be built on surrounding streets — making it less livable. But at the moment, the area remains appealing.

This is not to say that all that I experience of the city during the week is pleasurable. I get stuck on a Fifth Avenue bus crawling downtown, and trip that should take 40 minutes at most takes 75 minutes (bus speeds are down from an average of 7.8 mph in 2000 to 7.4 today). So it’s no mystery why bus ridership has fallen. Also, almost every few blocks I see young men with cardboard signs reading either Hungry or Traveling Broke, Living on Faith, Anything Helps.

When I get home I put on the television with apprehension. The world is aflame — one day it’s a coup in Turkey, the other a horrific massacre in Nice, and another a mass shooting in Munich. It all seems inexorable without any answers in the offing.

But what’s worse is the Republican convention. Yes, I’m a left/liberal, and even a decent conservative candidate like Romney in 2012 aroused my anger. But Trump is another story.

There is no point cataloguing all that repels me about Trump and the Republican convention. What does strike me is how authoritarian Trump is. He is a con man, narcissist, compulsive liar, and gifted media manipulator, but what’s most dangerous is that he is a red-faced, raging authoritarian who has contempt for civil liberties. One sees it most clearly in his admiration of ruthless, authoritarian strong men like Putin and Erdogan.

His bombastic speech at the convention painted a portrait of an unrecognizable America heading for the apocalypse. He stoked fear of crime, violence, and illegal immigration, distorting the facts at every turn. He appealed to the mob’s racism and anxiety about terrorists by promoting “law and order” and “America first” to the lemming-like chants of USA. The only answers he provided for our problems was that once he took office he would make everything right. Just have faith in the strongman and forget about liberty and democracy, and a better world would be achieved. It’s what authoritarian politicians throughout history have proposed.