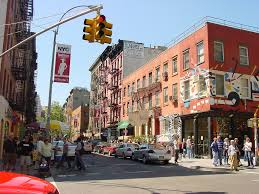 New York — I can’t really do much wandering these days. At best I may hobble and stagger 8 to 10 blocks to shop or go to physical therapy, but my stenosis makes me conscious of every step I take. As a result I am unable to fully observe what occurs around me on the city streets and neighborhoods I pass. Still, old passions — fortunately — don’t disappear that quickly.

Instead of walking I have taken long bus and cab rides, which pass through city neighborhoods I haven’t looked at for awhile. On these rides I try to get outside of my pain, and reaffirm again my desire for looking closely at the city.

A cab drive through SoHo streets brings back fond memories of a less moneyed, more bohemian world of the ’70s, when there were many small factories and imaginative restaurants like FOOD flourished on Prince Street. The restaurant, co-owned originally by an artist Gordon Matta-Clark, offered a menu that was simple, healthy and affordable. My wife and I ate there weekly, and brought friends and later our daughter there. It always felt communal and warm.

FOOD is long gone, as well as most of the galleries that dotted those streets. And a first-rate, local breakfast place we went to often — the Cupping Room — now serves mostly tourists and hotel guests, and no longer feels like a neighborhood gathering place. The few times I have stopped to eat there in recent years, it felt alien.

But today’s SoHo filled with high priced designer boutiques like Chanel, Louis Vuitton, Prada, high end cafes, hotels and luxury buildings built on empty lots is another world — much more sterile and less idiosyncratic than in the years it was an integral part of my life. Still, looking out the cab window I see that the handsome 19thcentury cast-iron fronted buildings, now all whitewashed and often repainted, remain on the old cobblestoned streets. And I know that artists continue to inhabit the lofts among the bankers and hedge fund managers. So, tourist destination that is has become, SoHo maintains some urban virtues.

If I can’t walk easily, I can still watch television and read the Times, and obsess about Kavanaugh, the chameleon-like Graham and Trump. What is troubling is not Trump’s predictably crass and sadistic behavior, but the support Kavanaugh has aroused from a sizable portion of the public. Clearly, his self-righteous rage and sense of victimhood (a more articulate, smoother version of Trump’s) connects to people who never lived his privileged life. It’s his beer drinker’s machismo, his contempt for women, and his antipathy to liberalism, in all its incarnations, that speaks to them. Sometimes I find the ‘30s novelist John Dos Passos’ words in response to the execution of Sacco and Vanzetti —  “We Stand Defeated America” — the only right ones to describe what we are living through.