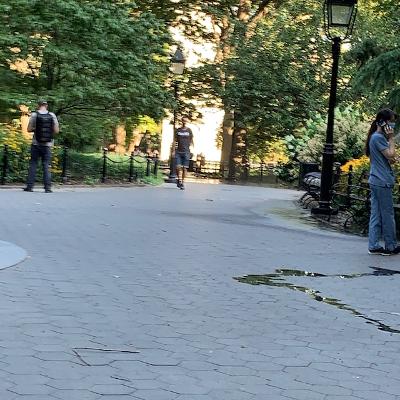 We have returned to New York for a couple of days to resolve some practical problems. It’s more than 90 degrees and the city is sweltering and uncomfortable.

Driving on the West Side Highway we are greeted, as always, by Trump’s monolithically ugly, luxury apartment development (Riverside South). Trump hasn’t owned the development for many years, but in my mind this stunningly located, sterile set of buildings overlooking the West Side Highway and the Hudson River are the perfect monument to his vulgarity, megalomania, and his utter disdain for the city’s physical fabric and humanity.

Trump lived, played and invested in New York, but his city consisted of celebrities and real estate developers, many of them either passing through or just living in the city a few months each year. And most of them like Trump greedily taking from the city, giving nothing back in return.

As we drive through Chelsea to the Village, I see through the car window fewer people than usual on the streets. Still, there are a number of masked young people eating outdoors in restaurants, and others shopping. The pandemic has wiped out many of the longstanding anchors of New York neighborhoods — an Irish pub that drew crowds for generations. A coffee shop that sheltered Brooklyn residents on 9/11, and a record store that stood for more than 60 years in the Times Square subway station. How many stores will survive?

As we drive into the Village and towards our home, I see a great many stores for lease, others temporarily closed (including my favorite breakfast place–Café Lafayette) and a few open for business but boarded up — a legacy of the looting and violence that a few protestors and criminals engaged in during those weeks. I like being home, despite feeling that it will take a long time for the city to revive. It feels too bare, and too quiet. It’s not quite a ghost town but looking like a traumatized version of itself.

Our first day in New York, I buy a Times, coffee, and a toasted bagel, and I sit in Washington Square Park watching young masked dog walkers, joggers, and strollers pass by. Nobody talks to each other; they look like the utterly alienated characters in one of the great Italian film director Antonioni’s films – “The Eclipse” or “Red Desert.”

Obviously, wearing masks are imperative, but they make casual conversation impossible, and the sense of isolation even more intense. The few people not wearing masks are often bare-chested homeless people, whose numbers are growing, as the army of unemployed and evicted expands.

And then there are The Daily News’ continual reports of gang shootings and deaths in New York making one feel the city is under siege. But most of the violence occurs in the South Bronx and in un-gentrified Brooklyn, and much less of it takes place in more privileged Manhattan neighborhoods. Nevertheless, the news always invokes a memory of the city of the 70s and 80s when crime was rampant and the night streets could seem threatening. And all the logical explanations for why the violence has erupted — the pandemic, record unemployment, courts backed up — don’t make one feel any better about the city.

This is the first time I have been back to the city in more than four months, so I have no first-hand experience of what it has felt like living there during the lockdown and protests. I have a friend in my building, in his 70s, who has remained in the city all these months. He is someone who tends to wander about the city at night, and is a sharp and knowing observer. When the lockdown began he wrote: “Suddenly everything died. I could stand in the middle of Broadway looking south towards Bowling Green and not see any cars or buses. For the first time you could see all the way down and see the dips where the road goes down near City Hall.”

During the George Floyd demonstrations, he saw moments of rage and anarchy, and the police accentuating the turbulence by being out of control. However, from our apartment house, a block from Washington Square Park, he also could see the streets inundated with mostly young people shouting “Black Lives Matter.” They were a diverse group of peaceful marchers. He saw “Muslims with written signs in Arabic, Koreans, Africans, Chinese, all with their own signs and all wearing masks.”

During the slowly phased opening of the city, he saw some change on the empty streets: “European style sidewalk cafes, car parking spaces taken over by individually designed sitting areas with umbrellas.” And at night some dangerous crowding of drinkers outside bars — always an unthinking way to spread COVID-19.

Though my friend’s impressions are more positive than most, it’s clear that I return in September to a city that will be a shadow of itself. Still, I am hopeful that I will live to see its gradual resurrection. And I know I sound like a Pollyanna, but I believe it will ultimately come.