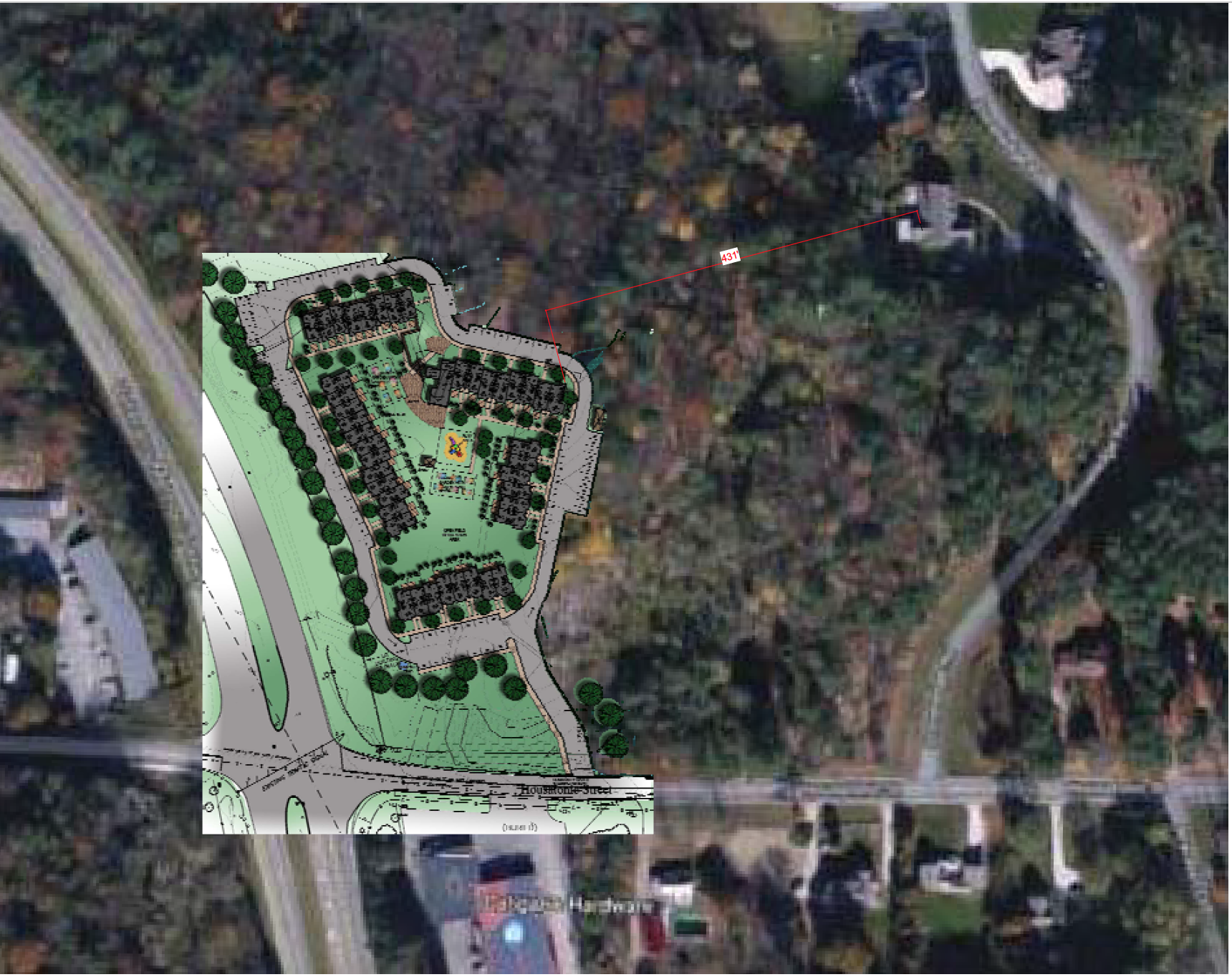 Toward the end of the Twentieth Century, I became aware of an on-going discussion of the need for more affordable housing in Lenox. Teachers, firefighters, police officers, hospital workers, general workers and service providers, young people starting out, and empty-nesters, the very people a community depends on for safety and healthy diversity were finding it harder and harder to afford to live there. To my surprise, having recently moved from Fairfield County, Connecticut where affordable housing sometimes came up, but without being followed up, the buzz led to action. In 2011, Lenox overwhelmingly agreed to buy a 19.6 acre parcel of land, called the Sawmill Brook Project at the corner of the Route 7/20 bypass near Housatonic Street with the purpose of developing it for affordably priced owner occupied homes.

Environmental complications arose: a vernal pool, wetlands and a migration corridor for threatened salamanders reduce the amount of land that can actually be developed to 6 acres, but Community Development Corporation of South Berkshire made a five year agreement with the town to attempt it. Almost immediately, state and federal funds for ownership housing dried up as house prices rose. Even with various good faith donations, including one from the Episcopal Diocese of Western Massachusetts, CDC couldn’t move the Sawmill Brook project forward. In 2016, the agreement expired. The town of Lenox still needs affordable housing and it now holds a $600,000 property, unused and waiting to fulfill its almost decade old promise.

Government support in the form of tax credits and financing incentives remains, however, for rental developments, so in November of 2018, Lenox Land Use Director and Town Planner Gwen Miller made a formal public Request for Proposals for Development for rental as well as owner occupied housing. There were three replies: one Philadelphia firm failed to qualify, and the two Massachusetts developers that did qualify both proposed mixed rental housing units because home ownership projects no longer receive state aid.

In March of this year, Tim Geller of the well-respected, community-based Berkshire Housing Development Corporation of South Berkshire (in conjunction with the nonprofit Berkshire Housing Corporation which already manages 950 affordable housing units in Berkshire County) were once again chosen by the town to fulfill the intention of the 2011 vote. It proposes building a $15 million 50-unit complex of mixed affordable and market rate apartments. The state of Massachusetts seeks and encourages 10 percent affordable housing in all 351 of its cities and towns. At present, Lenox sits at 7.2 percent, but with this 50-unit project added, it would reach 9.4 percent.

Two weeks ago, a friend handed me a copy of a two-page anonymous letter which had been circulated among abutters to the Sawmill Brook property. It claims the plan includes high rise buildings with un-Lenox-like density, and speculates that the wetlands and the vernal pool might “go away,” and that the plan might even include “commercial space.” The letter also claims that that the revival of the affordable housing project was done in secret. I don’t live in Lenox although I have attended church there for 25 years. I shop there; I’ve worked at Shakespeare & Company and several other businesses, and I have many friends there.

I wanted to write this piece about the project as thoughtfully and fairly as possible. The letter confused me. Were any of these charges accurate? I started telephoning. Who, I asked friends, should I speak to for correct information from the town?  Of all the names that surfaced, there was one person, Marybeth Mitts, who I was told repeatedly would know the facts and explain them calmly and clearly. Someone gave me her email address, and twenty-four hours later, we met for coffee in Price Chopper’s unfussy space for in-store shopping breaks. I had my phone to record what was said; she came with pictures and diagrams.

Marybeth Frazier grew up attending public schools in West Hartford, Connecticut. She graduated from Mount Holyoke College, and did her masters studies in public administration at the University of Maryland with an emphasis on finance. She was one of 200 graduate students nationally who was fast tracked to work for the federal government, where she chose to learn on-the-ground about all aspects of housing because she says she thought, “everyone has to live somewhere.”

After marrying orthopedic surgeon Kevin Mitts, she moved often because he was in the Navy, but she spent years working on various aspects of housing in the public and the private sectors, at one point starting and running her own successful business. Eighteen years ago, she and her husband settled in Lenox in order to enjoy its small town life and give their children the pleasurable advantage of its highly ranked school system. She is now the Chairwoman of the town’s Affordable Housing Trust. No wonder people kept suggesting I talk to Marybeth Mitts about Lenox and the current Sawmill Brook Project.

“I have supported the process of developing The Sawmill Brook Project as a representative of the town because in 2011 it bought the property with Community Preservation Funds to specifically develop it for housing,” she explained.

Ownership development has become very expensive. According to lead developer’s Tim Geller, who has been working on the project for 13 years, the state has no intention of re-instituting support for owner occupied affordable housing, so the town’s original idea won’t work.

“We think the townspeople should have a chance to vote on what is feasible today,” Mitts told me. 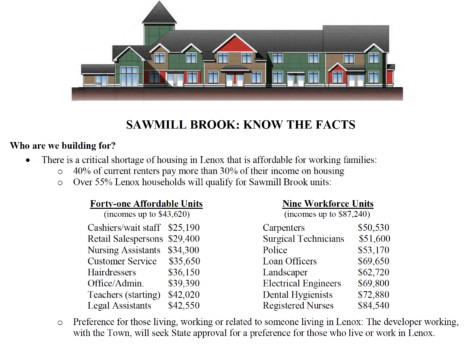 The 6-acre site would have forty-one affordable, and nine market rate apartments in six buildings, five of them 2 stories high, and one 3 stories high to accommodate an elevator for renters who would require assistance to reach handicapped-accessible apartments. There would be 12 1-bedrooms, 28 2-bedrooms and 10 3-three bedrooms. This means 38 of the 50 units would be pitched toward families. The proposal calls for eighty-four parking spaces, a central green and a community building for meetings and celebrations as well as a separate space for laundry facilities.

Also planned are a children’s playground and two small community gardens with raised beds, as well as walkways all around, a small path to the vernal pool and wetlands with benches for residents. There would also be evergreen screening surrounding the entire project to protect the neighbors. The buildings would be built near the road. It is on a bus line and needs only to be connected to town water and sewer lines which are already there. The space from existing homes on abutting Stoneledge Road, would be a minimum of 400 feet of woods and evergreens. Presently, the closest house on Stoneledge Road is 425 tree-screened (even in winter) feet away.

At the Annual Town Meeting to be held on May 2nd, residents will be asked to vote on whether to donate the Sawmill Brook property to the developer to facilitate needed state aid. Mitts said people have asked why the developer has asked Lenox to donate the land.

“In order to qualify for tax credits, the state requires some kind of local match through a cash contribution. The land here qualifies as the local match since it was acquired through Community Preservation funds. So what makes the most sense is to make that land our donation to the project without spending additional money, yet giving us bonus points for state funding. It would show community commitment, helping us to qualify for tax credits. Lenox already has a housing production plan passed by the state. Whatever type of housing we propose, this donation would be looked-for,” Mitts assured me.

The measure will require a two-thirds super-majority for passage. Upon passage, Massachusetts’ state statute, Chapter 40b would be automatically triggered to do an environmental review, a traffic study, and a review of the project’s sensitivity to local zoning controls. At a later date, the CDC of South Berkshire intends to return the undeveloped portion of land to the town for open space, giving Lenox an additional tax advantage. Without passage, affordable housing in Lenox will stall again.

Lenox and Geller want adoption of a local option for acceptance of applicants to live at Sawmill Brook, meaning that 65 percent to 70 percent of the people moving in would already have to live or work locally. Berkshire Housing Services would oversee management of the project in perpetuity, and re-capitalize it in fifteen years, including repair and/or replacement of roofs, boilers, and other major features. Throughout Lenox, there have been open forums for discussion of the Sawmill Brook Project for weeks.

“We are trying to get this property into town use,” Mitts told me.

If the Sawmill Brook project goes through, it should attract new employers and new businesses to Lenox, as well as house many people who are already employed here. It would also contribute $40,000 to $50,000 annually in property taxes.

“There is nothing to be afraid of,” said Mitts. “But if the people don’t want it, we’ll have to think of something else.”

So Lenox Town Meeting is set for May 2nd at 7 p.m.. When I left my interview with Mitts, I took away a very long recording of questions, answers, facts, explanations, clues to continued research, and a sober understanding that once again New Englanders are considering complex issues and demanding of themselves a serious exercise in democracy.