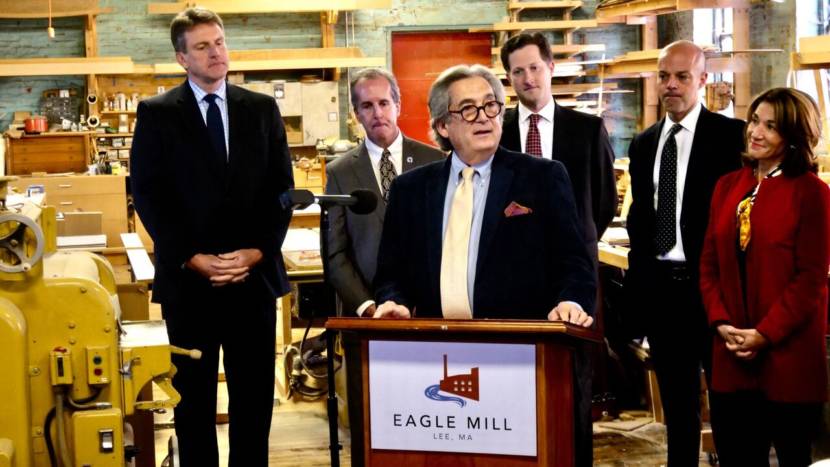 In a written statement from the state Office of Housing and Economic Development, HED spokesman Colleen Arons said the MassWorks grant will fund 9,000 linear feet of new water main from the town’s water treatment plant to the proposed Eagle Mill mixed-use development at the north end of Main Street.

The funding provides a foundation for 80 market rate and affordable rental units at Eagle Mill, as well as commercial and recreational spaces.

“Our administration is committed to programs like MassWorks, which impact not only local infrastructure, but also play a critical role in strengthening businesses and the communities that surround them,” said Gov. Charlie Baker. “MassWorks is one of many administration initiatives that enable local communities to tap into private investment and accelerate local economic growth across the Commonwealth.”

“The saying ‘It takes a village to build a village’ is certainly true in the case of Eagle Mill and the Baker-Polito administration’s participation is essential to the success of this endeavor,” said Eagle Mill developer Jeffrey Cohen.

Cohen said the MassWorks grant enables the company to continue to move forward with the development of the Eagle Mill. Its 80 residences are to be developed by Rees-Larkin Development and Berkshire Housing. Its market is to be developed by the Marketplace Hospitality Group.

The company must still obtain site plan approval, conservation commission approval, the allocation of historic tax credits and additional commercial financing. Cohen hopes to start construction on the $60 million project in the fourth quarter of 2019.

“We are excited to continue this collaboration as we revive and restore the historic Eagle Mill and bring more than 200 new jobs to Lee,” said Cohen, who emphasized the “we” in the project.

“This is just a great day,” Cohen said in a brief interview. “But it’s not about Jeff Cohen. It’s about the family of Lee that brought this development to where it is today.”

Since 2015, the Baker-Polito administration has awarded over $275 million in MassWorks grants to support 138 projects in 106 communities. MassWorks funding has been critical to the addition of over 2 million square feet of commercial/retail space, approximately 10,000 full- and part-time jobs, more than 7,000 immediate housing units, at least 7,000 square feet of new public space, and 1,200 new hotel rooms.

Through the 2018 MassWorks round, the Baker administration says it will award more than $82 million in new grants for 40 projects that intend to leverage $2.9 billion in private investment, and drive an anticipated 4,000 units of new housing and more than 9,000 full-time jobs. Thirty-seven communities across the state will benefit from this round’s investments.

In order to provide adequate water service to the proposed development, the town needed to upgrade the water main that serves that northern downtown district, which most people think of as the area where Joe’s Diner is located.

The town applied in August 2017 for a $6 million MassWorks infrastructure grant from the state to fund the upgrade. That application was denied, as was a subsequent application, but the town persisted, made the project more “shovel-ready” and submitted a third application, which came to fruition Thursday.

Baker’s office said he signed economic development legislation in August that includes substantial new funding for municipalities, including another $250 million for MassWorks awards.

Other officials connected with the project also issued statements:

“I am pleased to be here in Lee to announce the Baker-Polito administration’s support for the continued development of Eagle Mill and future housing and commercial projects, which will now be possible because of this vital upgrade to Lee’s infrastructure,” added Polito. “The governor and I are pleased to continue to make the investments in the public infrastructure our cities and towns need to create sustainable growth.”

“Through the flexibility of MassWorks, we have been able to drive over 2 million square feet of new commercial space, made possible by listening to individual communities’ needs and by responding with individualized programs that benefit many stakeholders, such as the Eagle Mill development,” said HED Secretary Jay Ash. “Our office saw another competitive round of MassWorks for 2018 and we are happy to keep the momentum going across the Commonwealth.”

“The improvements funded by the MassWorks program will not only make the redevelopment of the mill possible, they also serve as a foundation for ongoing infrastructure reinvestment in Lee’s vital commercial center. The timing of the Commonwealth’s support is absolutely critical to the town of Lee. We are very excited and appreciative,” said Ketchen.

“MassWorks grants provide critical assistance when towns need it most. We are thrilled to support this strategic investment into Lee’s infrastructure, which will help grow the town’s economic growth,” said Hinds, who serves as the Senate vice-chairman of the Joint Committee on Economic Development and Emerging Technologies.

“The Lee Eagle Mill Project is going to serve as a transformative development for the Berkshires,” said Pignatelli. “I have been proud to work on this project for the past five years, and truly believe this MassWorks funding grant will serve a vital role in helping complete the project. I want to thank former Sen. Ben Downing and former town administrator Bob Nason for their influential contributions toward this project, and express my gratitude to the Baker-Polito administration for this critical infrastructure investment, which will not only impact Lee, but will impact the entire Berkshire region.”