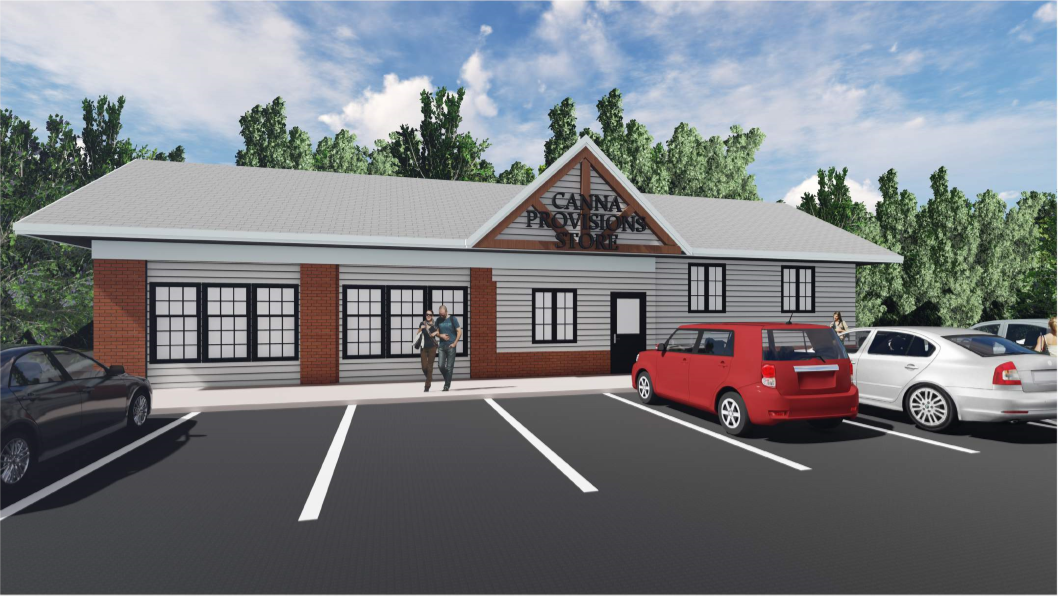 A rendering of the new Canna Provisions store on Housatonic Street in Lee. Company representatives expect it to open in a matter of weeks. Image courtesy Canna Provisions

Lee — It’s enough to make your head spin. There has been more movement on the Berkshire cannabis scene as another South County retailer has received its final license from the state Cannabis Control Commission, and a farm in Sheffield has also received final approval to grow marijuana at 136 Kellogg Road.

Canna Provisions, which is opening the marijuana shop at 220 Housatonic St., received its final license from the commission Thursday, CEO Meg Sanders said. Click here to see the CCC’s positive recommendation for Canna Provisions’ provisional license in February. That document contains no material changes from the permanent license, Sanders told The Edge in an interview.

The store is located in Lee at 220 Housatonic St., the site of the former Southern States auto service center. Sanders said the building, next door to the Dunkin’ Donuts, has been completely renovated and is fully equipped to comply with state regulations.

“The only thing missing is the product itself,” she said.

Canna chief operating officer Erik Williams said it’s not precisely clear when the store will open but it will likely be in a matter of weeks. He and Sanders have hired staff, which will eventually number more than 25, and are working to make sure they are all Metrc certified.

“We’ll need to get the product into the store, then receive a final inspection from the CCC,” Williams said. “After that, we could get the final okay to open in a few days.”

The project received a special permit from the Lee Board of Selectmen last year and later completed the site plan review process with the planning board.

In addition, Canna has an application for a cultivation facility in the Quarry Hill Industrial Park in Lee and for a retail operation in Holyoke. Both are currently in the permitting stage.

When it opens, Canna will join several other cannabis stores already opened in Berkshire County, including Theory Wellness in Great Barrington, Silver Therapeutics in Williamstown, and Berkshire Roots and Temescal Wellness, both in Pittsfield.

Both Sanders and Williams said they are confident that there is plenty of room in the cannabis market for their product in the Berkshires, which has a mostly tourism-based economy. Sanders opened one of the first marijuana dispensaries in in the state of Colorado, the residents of which voted to legalize adult-use cannabis in 2012. Since then, tourism has grown substantially in Colorado and cannabis-based tourism has grown 51 percent since 2014.

“We’re definitely confident,” Sanders said. “Our business experience is in Colorado, which is hands-down the most competitive market in the U.S.”

According to the Berkshire Visitors Bureau, 2.6 million people visit the Berkshires annually. And Williams sees the county’s emphasis on wellness as a perfect complement to the cannabis industry. He pointed to organizations such as Canyon Ranch, the luxury retreat in Lenox, and Kripalu, the health and yoga retreat in Stockbridge.

Sanders says Canna customers will see a different approach to service. Instead of customer-service counters lining the walls, there will be 11 sales kiosks inside the store. That will make for “a more satisfying experience” and it “will mitigate waiting times,” she explained.

In addition, Williams says Canna has worked with the town on parking concerns and when the store opens there will be two off-duty police officers directing traffic.

Of being next to the Dunkin’ Donuts, Sanders quipped, “They can’t wait for us to open, too, for obvious reasons.”

Meanwhile, about 20 miles down the road in Sheffield, Nova Farms, which markets itself as “New England’s first and largest outdoor cannabis cultivation” facility, said in a written statement that it was unanimously approved by the CCC to begin cultivation operations.

The company said the decision makes Nova Farms the first-ever legal outdoor grow facility “on the East Coast and the largest with 80,000 square feet of cannabis canopy” that “boasts some of the richest soil in all of Massachusetts.”

Nova says it will use sustainable methods to minimize its carbon footprint and will also be home to livestock such as Scottish Highland cattle and an apple orchard. Nova will also keep bees on the property to manufacture cannabis-infused honey. The cannabis will be grown outdoors organically and will be free of pesticides.

“Our team is proud to be the first approved outdoor cultivation on the East Coast. We are indebted to our neighbors and the community around us for their help and we’re very excited to showcase the way cannabis should be grown, specifically right here in Sheffield,” Nova Farms CEO Derek Ross said.

Elsewhere in South County, the aforementioned Theory Wellness, which opened its doors in 2017 in Great Barrington as Berkshire County’s first medical pot dispensary and earlier this year began selling the recreational variety, is partnering with organic farmer Ted Dobson to open an outdoor grow facility at Dobson’s Equinox Farm on Bow Wow Road in Sheffield. Click here to see the CCC’s decision on the provisional cultivation license.

Click here to read an Edge story from April on the two Sheffield grow facilities. Great Barrington itself is rapidly becoming the cannabis hub of South County. In addition to Theory Wellness, four other shops are planned.

The cultivation, sale and use of recreational cannabis-related products was legalized in Massachusetts through a 2016 ballot initiative. The measure passed by almost 7.5 percentage points statewide and by almost 30 points in Great Barrington and by almost 24 points in Sheffield. Implementation of the new law was left to the hastily created state Cannabis Control Commission. Preceding that law, medical marijuana was legalized in Massachusetts in 2012 through the same process.