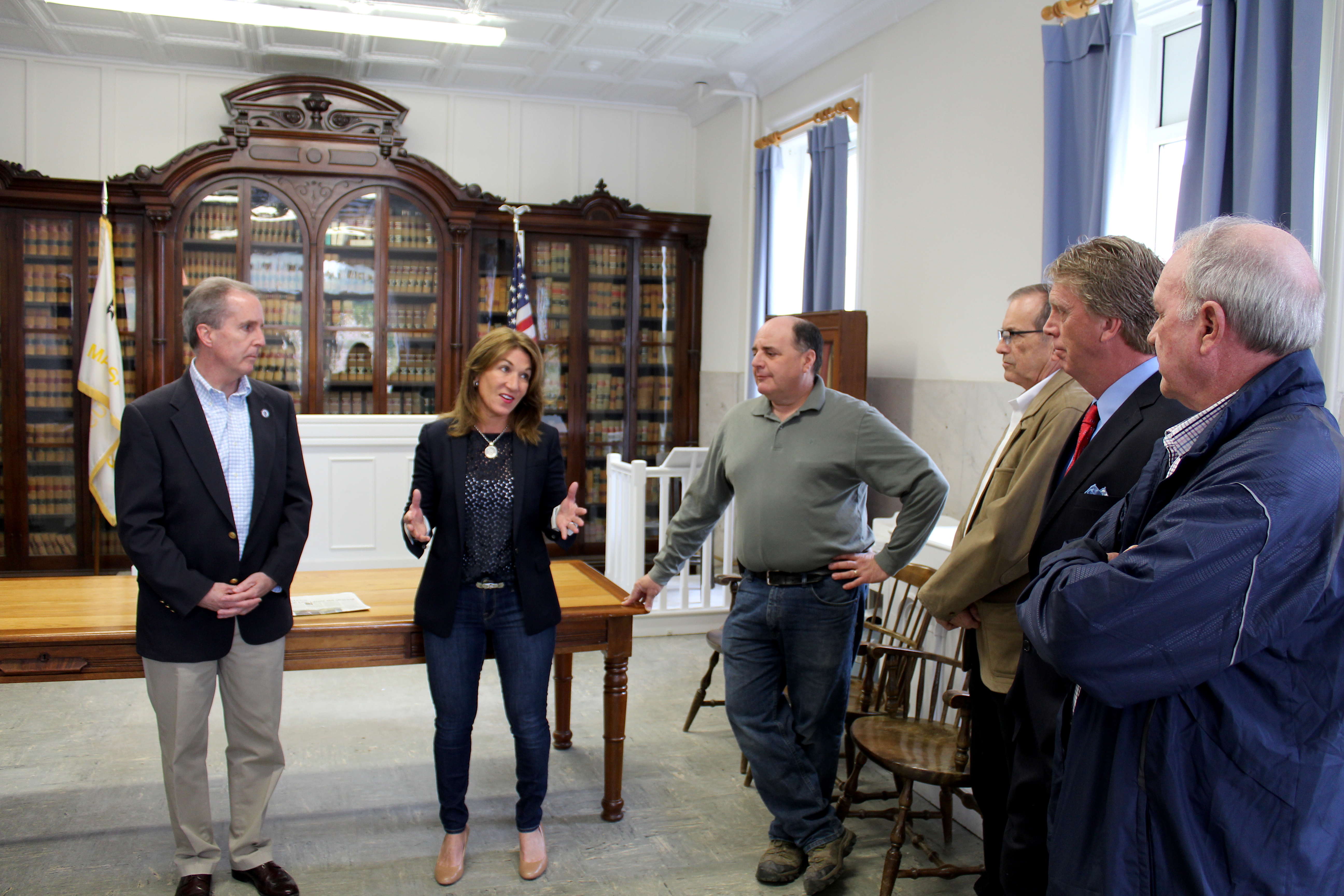 Lee — The lieutenant governor made an appearance. Words like “historic” and “landmark” were bandied about. The sounds of squirming young children could be heard. No, it wasn’t exactly an ordinary day in the old courtroom at Lee Town Hall.

Lt. Gov. Karyn Polito was reunited Saturday with her old colleague in the State House, state Rep. William “Smitty” Pignatelli, to celebrate the consummation of a deal between Lenox and Lee to share a top manager.

With the upcoming retirement of longtime Lee Town Administrator Bob Nason, the time was ripe to ink a deal that would bring Lenox Town Manager Chris Ketchen to Lee to assume the position of chief administrative officer (CAO) for both towns.

“Chris, you’re the guy!” Polito shouted on meeting Ketchen, who will assume the dual role on July 1.

“The time is right to share services at the local level,” Polito said. “What I love about this is it’s not state government telling you what to do or how to do it. This is you and the community now coming together because you want to, and most importantly, for the future generation to lay their roots in this community.”

The move grew out of a Community Compact signed in Great Barrington by 17 Berkshire County towns shortly before Christmas 2015. The governor had previously appointed Polito the point person for municipal issues in his administration.

Among the goals of the Compact, Pignatelli has said, are to improve town and school services, and provide tax relief, while maintaining each town’s identity and sense of local control.

“This is the culmination of a lot of work by a lot of people in both communities,” Pignatelli said. “My hat goes off to everyone involved.”

The Community Compact was created as one of Baker’s first executive acts in January 2015. The compact is a voluntary, mutual agreement entered into between the state and individual municipalities for a variety of initiatives designed to control costs and achieve economies of scale.

With the retirement of Town Administrator Jorga Marsden, the town of Stockbridge had originally been a party to a tri-town agreement to share a CAO with Lenox and Lee, but a divided Board of Selectmen voted in January to withdraw from the pact, citing a possible loss of independence and identity. It was a source of disappointment for Pignatelli.

“This is pioneering — you are setting up a model that other communities in this commonwealth can study,” Polito said. “Every city and town is parochial about the way they do things. Local government is a deep tradition here. For you to even think about doing this better is really profound.”

Though there are remnants in the eastern part of the state, county government was essentially abolished in Massachusetts some 15 to 20 years ago. Since then, towns have been trying to find ways to share services to save money.

Shared services advocates in Berkshire County often point to the county’s many regional school districts, including the Southern Berkshire Regional School District, which was the first such district in the state. And of course there is the Tri Town Health Department , which provides health inspection services to Lee, Lenox and Stockbridge, and is often cited as a sterling example of regional cooperation.

It is perhaps ironic that Lee and Lenox are the first two municipalities in the county to share a CAO. The two towns have maintained a fierce athletic rivalry between their high schools. And of course, youths from both towns were involved in the traumatic Laurel Lake incident in which two teenagers from Lee drowned in their car after a fight with seven boys from Lenox in 1981. Known as the Lenox Seven, all were convicted of involuntary manslaughter and were sentenced to two and a half years in jail.

Ketchen, a specialist in finance and management, said the plan is to hire an additional shared professional who would focus on human relations for employees of the two towns. Ketchen and Nason have been meeting for almost two years to plan the transition, so Ketchen figures it will be a smooth one.

Nason added that structurally the two towns are set up in much the same way, even though Lee has a town administrator form of government and Lenox a town manager system. Ketchen explained that, in actuality, the differences between the two systems are minimal.

Both Pignatelli and Polito noted this might be the first time in state history that both the governor and lieutenant governor have previously served as selectmen — Polito in Shrewsbury and Baker in Swampscott.

“They understand what’s going on in our small towns,” Pignatelli said, calling Saturday a “landmark day.”

“This is about the next generation — not the next election,” Polito said before leaving.