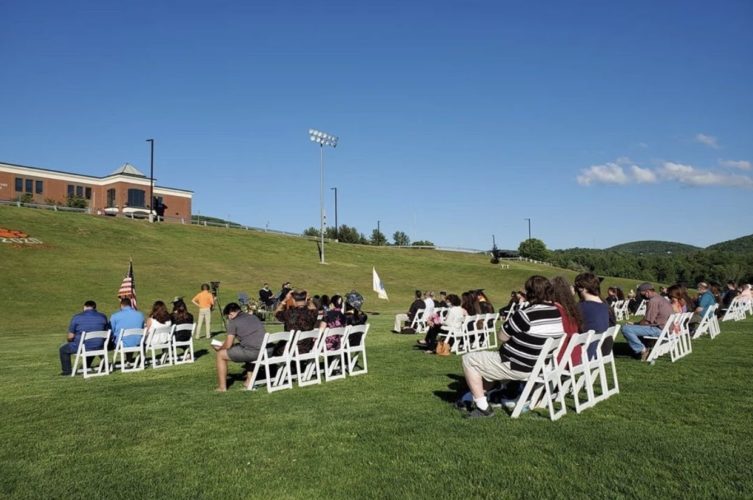 Lee — After months of distance learning via computer screen, for the first time in months, Lee High School seniors spent time with their classmates in person.

In a June 12 ceremony held on the school’s football field, 53 students graduated, according to Superintendent Michael Richard. The class of 2020 and Lee High School Principal Gregg Brighenti were the motivating forces behind the in-person graduation, said Richard.

“They are a small but tight-knit group that wanted to reclaim some semblance of normalcy to their senior year; who was I to oppose that?” Richard said. “We invited student feedback on what they wanted and we did our best to accommodate them. The greatest challenge was managing the number of attendees, but I appreciate that the community has been so supportive of this. We are very much looking forward to giving the students the opportunity to connect as a class ‘one last time.'”

Suriana Lee and Emily Molino have been named the valedictorian and salutatorian, respectively, of the Lee High School class.

Lee is the daughter of Chin and Sabrina Lee. She is a member of the National Honor Society, student government and the social justice club, and was a captain of the volleyball and tennis teams. She is a recipient of the Daughters of the American Revolution Good Citizen Award, the Superintendent’s Award and the Principal’s Award for Excellence, and is a commended student in the National Merit Scholars program. She will be attending the University of Michigan in the fall, studying aerospace engineering. She has dreams of working for SpaceX or NASA after college.

In her speech, Lee acknowledged the mistakes made throughout her scholastic career by her and the class of 2020. Among the mistakes Lee highlighted were refusing to come together as a class until senior year, not spending more time together, and not admitting how much she and her classmates meant to each other.

“Our biggest mistake was that even though we’ve made countless memories together, we didn’t make more in a time of uncertainty, in a time where we can’t even be together as a class and experience the things we have been looking forward to as kids: prom, graduation, Class Night. Our biggest mistake was taking our time in high school for granted. We didn’t get to properly say goodbye to our teachers, our classrooms, our hallways for the last time,” she said. “But after all, we’re here. We’ve made mistakes but at the same time, we’ve cried together, we’ve suffered through adversity together, and we’ve overcome challenges that no other class has ever had to overcome.”

Though Suriana Lee said that not being with her classmates during her senior year was very sad at the same time, it has also been an “eye-opener.” Having received her education in Lee her entire scholastic career, access to help during the stay-at-home quarantine has proven to be stressful, she said.

“It’s so hard to be away from people that you’ve spent five days a week with for eight hours a day for eight months out of the year for 12 years of my life,” she said. “I am really appreciative of the time I got to have with friends and teachers. It’s nice to have such a supportive community standing behind you.

“I want to say thank you to all my teachers and faculty and friends. I couldn’t do it without all of that support.”

Molino is the daughter of Nicholas and Karen Molino. She is a member of the National Honor Society, social justice club, student government, Quiz Team and Helping Hands, and was a captain on the cooperative swim team hosted by Monument Mountain Regional High School.

She also played on the volleyball and tennis teams, as well as track and field. She is the treasurer of the senior class, and received the Cornell Book Award and the Dartmouth College Book Award. She will be attending the University of Rhode Island to study chemical engineering, and hopes to minor in environmental engineering.

Attending a virtual Class Night was the first time Molino had an opportunity to see where students had decided they were going after Lee High. For the past few months, Molino said she had been attending Zoom sessions almost every day of the week. In the beginning, distance learning was a challenge, but the class adapted.

During her speech, Molino thanked the community for the signs around town and for the gift baskets that have helped add some joy during these “unexpected and unique” times.

“Countless events have brought us to this moment: freezing at football games, attending plays and art shows, the addition of flextime, the rise of the house system, spirit weeks, labs in science classes, coffee spills … all the funny moments that came out of the pep rallies like watching our teachers get pies in their faces or wrapping them up with toilet paper or the hilarious endings to musical chairs and the countless other school events that have led to lifelong memories,” she said.

“These experiences have made us all into the admirable and remarkable people we all are today. We can all look back and remember these times as we go on to the next chapter of our lives, no matter whether that chapter is college, basic training or joining the workforce.”