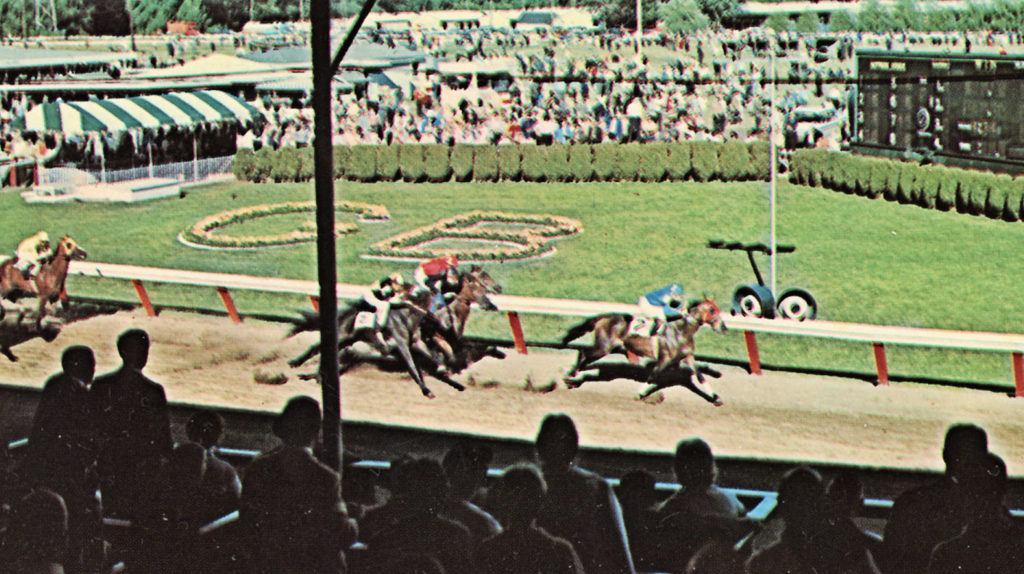 The view from the grandstand during a fairgrounds race in the 1960s. The company that owns Suffolk Downs wants to bring thoroughbred racing back to Great Barrington. Courtesy BerkshireArchive.com

Great Barrington — In an attempt to allay concerns and inject an additional measure of transparency into the process, the selectboard has sought answers from state lawmakers regarding a bill pending on Beacon Hill that would theoretically allow the return of horse racing to the Great Barrington Fairgrounds.

At the request of the selectboard, Town Manager Mark Pruhenski sent an email on July 24 to state Rep. William “Smitty” Pignatelli, D-Lenox, and state Sen. Adam Hinds, D-Berkshire, who represent Great Barrington in Boston, with a list of questions about Senate Bill 101 and House Bill 13.

Also of concern is whether a previous horse-racing license for Great Barrington dating to 1998—the last year racing was held at the fairgrounds—effectively grandfathers state approvals for the proposed operator, Sterling Suffolk Racecourse, owner of now-closed thoroughbred racing facility Suffolk Downs in East Boston.

Town Hall was packed Monday night, but selectboard chairman Steve Bannon made it clear that the subject would not dominate the regular board meeting and that brief public comments could be made during citizen speak near the end of the meeting.

See video below of Bannon’s statement, and another by Leigh Davis, regarding Senate Bill 101:

“We as a selectboard are gathered here to conduct the business of the town at a regularly scheduled meeting,” Bannon said. “Tonight’s not the time or the place to have a community discussion concerning Senate Bill 101 or racing at the fairgrounds.”

The possibility of the return of horse racing at the dormant fairgrounds has aroused passions in the region largely around the issues of traffic and animal safety, two issues Hinds told The Edge he is willing to work with town officials on.

Concern among town officials, on the other hand, is focused on local control and the legislative process. Others, including Housatonic resident Diego Gutierrez, have cited the questionable environmental record of Suffolk Downs.

In addition, selectboard member Leigh Davis, who has been the most active board member on the topic, wanted to know why more town officials weren’t made aware of the legislation and why the town of Great Barrington was not represented at a public hearing on the bills on July 1 in Boston before the Joint Committee on Consumer Protection and Professional Licensure.

Davis also read a prepared statement (click here to read it) focusing on transparency and what she called a “legislative loophole” in Section 12 of the Senate bill allowing Sterling Suffolk to “bypass local approval” in re-establishing horse racing at the fairgrounds.

The sentence in question in Section 12 reads: “A new local approval … shall not be required for thoroughbred horse race tracks that were licensed by the commission, or by its predecessor state racing commission for commercial racing under Chapter 128A.”

“This sentence is important because in 1998 a permanent license for a commercial racetrack was granted to Great Barrington,” Davis said. “Sterling Suffolk has publicly said they were aware of this, and that it was a major factor in their decision to move their operations here.”

Pruhenski had posted on the town website the two Berkshire County lawmakers’ responses to the selectboard’s questions. Click here to read them.

Hinds and Pignatelli confirmed that, regardless of whether the legislation passes, local control would remain intact. Indeed, town officials have said Suffolk would need at least two special permits: One for commercial amusement and another for floodplain protection, and possibly a third for work in the town’s water quality protection overlay district.

All would require public hearings in which residents could air their concerns or express support for the project. Most of the fairgrounds property lies in a floodplain next to the Housatonic River. The requirement of a special permit is widely viewed in the planning and zoning community as putting a municipality in the driver’s seat in confronting a potentially unpopular project.

Hinds and Pignatelli also dispelled the notion that a townwide referendum would be prohibited under the legislation. In fact, if residents do not agree with the decision of the special permit-granting authority (most likely the selectboard), the legislation allows for a referendum to require authority’s reconsideration if 12 percent of registered voters in Great Barrington petitioned for it.

“If the selectboard continues to support its decision, the matter is put before the town for a vote,” the two lawmakers added.

Hinds and Pignatelli also threw cold water on the notion that time was of the essence because the legislative session was winding down. Au contraire, they said, since the Legislature follows a two-year session. That session does not end until July 31, 2020, so there is still plenty of time for public input. Indeed, there is no deadline to submit written testimony to the committee.

Davis later sent a statement to The Edge thanking Hinds and Pignatelli for their responses, but said, “There is a need for more clarity on the question of a referendum,” especially in light of the fact that “Great Barrington may be ‘grandfathered in’ as a commercial horse racing location due to the issuance of a license to the town in 1998.”

“I look forward to seeking further clarity on this issue and working with our state legislators to amend the proposed bill so that a public referendum will be required [emphasis added] for Sterling Suffolk to engage in commercial horse racing in Great Barrington,” Davis said.

Pam Youngquist of Egremont told the selectmen, “There’s a tremendous amount of confusion around Sen. Hinds’ and Rep. Pignatelli’s responses to your questions in the community at large.”

See video below of Pam Youngquist’s questions to the selectboard:

Of the permanent license for racing issued to the fairgrounds in 1998, Youngquist asked if the town was conducting research to determine the origin of the “town or county approval that would have allowed that designation to happen.”

Bannon confirmed that was one of the things the town was trying to find out and that the results of that research “absolutely” would be made public. A public forum is also in the offing but not anytime soon.

“We’re not going to have a public forum now but once we have all the info, as a selectboard, there will be a time for a public forum,” Bannon said.

Later, Bannon added, “I guarantee you there will be a time and place to discuss the issue of commercial racing at the fairgrounds as a community. We will give you plenty of notice when that will be.”

Sterling Suffolk Racecourse has reached an agreement with fairgrounds owners Bart and Janet Elsbach to bring thoroughbred racing back to Great Barrington for up to 30 days of racing in the months of September and October starting in 2020. The company expects to spend between $15 million and $20 million, according to Pruhenski, who spoke last month with Chip Tuttle, Suffolk’s chief operating officer.

But in order to accomplish that feat, Suffolk needs a change in state law to permit it to hold races in Great Barrington while at the same time allowing it to maintain its simulcasting and betting operations back in East Boston. That’s one of the reasons for the proposed legislation.

The sponsor of the Senate bill is Sen. Joseph A. Boncore, D-Winthrop, whose district includes Suffolk Downs. Hinds is the co-sponsor. The Massachusetts Gaming Commission is sponsoring the House bill.