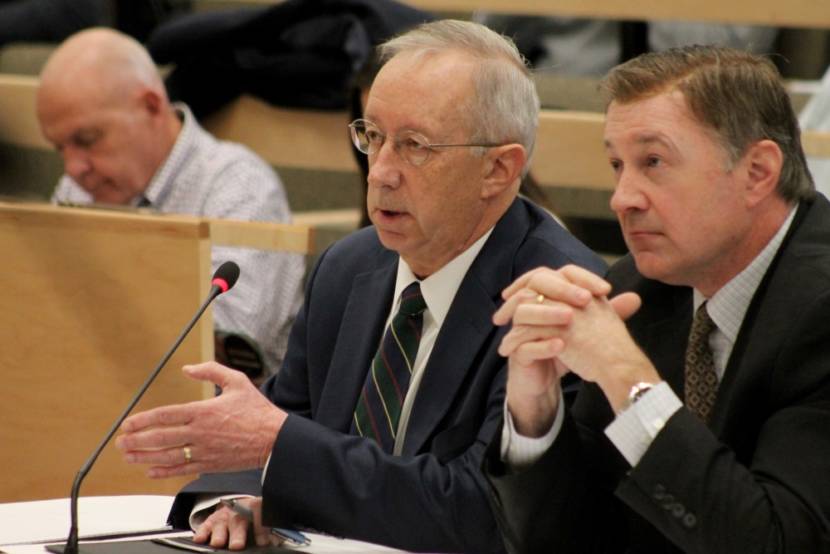 “Let’s say, as a working hypothesis, that it isn’t enough for you folks to police yourselves,” said

Sen. Michael J. Barrett, D-Lexington, chair of the Joint Committee on Telecommunications, Utilities and Energy, who led Tuesday’s hearing on statewide natural gas safety oversight. Barrett delved into issues like staffing deficiencies including lack of engineers, inspectors and techs on work sites; a culture of unaccountability and opaqueness in the gas industry; and gas companies’ lack of preparedness for rare but calamitous disasters.

Barrett opened the hearing by remarking on the lack of transparency in the natural gas utility industry compared to other infrastructure industries the legislature has dealt with.

“It’s been difficult to find out very much about the natural gas infrastructure business in Massachusetts,” he said. “There is no accessible culture of information sharing.” He contrasted this with the healthcare industry, which has more robust oversight and accountability with the Department of Public Health.

Barrett also contrasted the gas industry with the electric utility industry, noting that there are independent experts on electric utilities who are not associated with the industry. This doesn’t seem to be the case for gas utilities, as Barrett pointed to a lack of outside academic experts on gas infrastructure safety. When he asked the panel of gas company executives to respond to this observation, no one answered voluntarily.

Stephen Bryant, president and CEO of Columbia Gas of Massachusetts, refused to answer several of Barrett’s questions during the hearing due to the ongoing federal investigation by the National Transportation Safety Board on the Merrimack Valley explosions.

The NTSB has produced a preliminary report on the incident that includes urgent safety recommendations. One of those is a requirement that a licensed professional engineer be utilized for public utility work, specifically public utility engineering drawings. Currently, state law exempts gas utilities from the requirement of having an engineer’s stamp of approval. Gov. Charlie Baker has proposed legislation to eliminate this exemption. Bryant said Columbia Gas supports the NTSB recommendation on engineers and supports the governor’s bill moving forward. The other gas company representatives did not indicate opposition to the bill.

Besides a lack of certified professional engineers, Barrett touched on gas companies’ employment and use of technicians and safety inspectors out in the field. He decried how the companies have seemed to have trimmed their workforces at a time when construction projects like replacing outdated gas lines are increasing across the state.

“We have accelerated infrastructure buildout statewide, right in the midst of full employment economy, and it seems as if there’s a bit of a scramble to find workers,” Barrett said. “I am very concerned about how you’re pulling this off.”

“It’s clear there’s a strategy to drive down head count,” he added.

The gas companies could afford to bolster their workforce for safety purposes if they wanted to, given strong profit margins. Barrett started off the hearing swinging by bringing up the profit motive, asking Bryant how Columbia Gas has fared in terms of profitability.