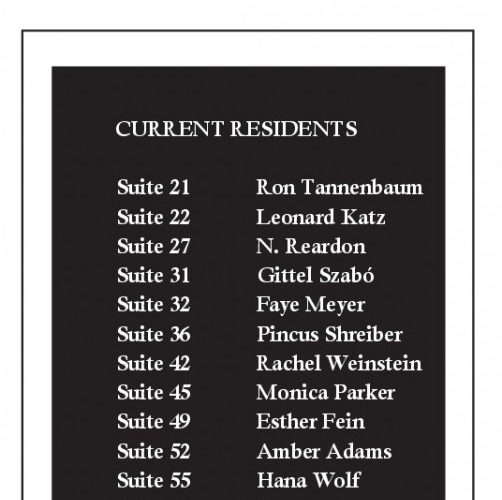 Editor’s Note: The Last Hotel: A Novel in Suites by Sonia Pilcer. This is the 12th installment of her tales of the Upper West Side in the 1970s. Look for it every Friday. To read the eleventh installment, with links to previous ones, click here. Of this work, the author Anne Roiphe writes: “Bittersweet, funny, human and humane, a movie surely waits.” 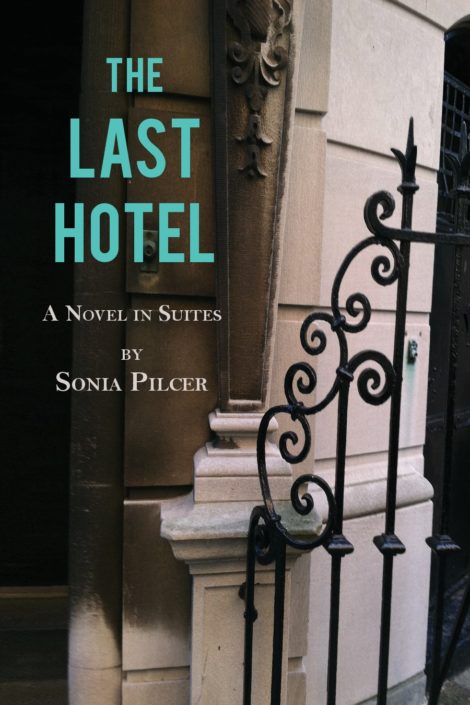 The first day of the year and he had this to deal with. Phone ringing at 7 AM. Bessie still asleep. “No way!” Henry groaned as he reached for the phone.

“Sorry to call so early.” It was Lenny, Suite 22. “I have a pick-up at LaGuardia. Anyway, could you meet me upstairs on the fourth floor? I have to show you something.”

Henry knew there was trouble. Like the time Dr. T’s waterbed started leaking downstairs. What a mess. And when Gittel left a pot on her hotplate and almost burned the place down. And Reardon’s expresso maker. What was it going to be? He could hardly wait.

Now he stood with Lenny, staring at the round bullet hole in the fourth floor hallway wall.

“You said what?” Henry asked.

“You wouldn’t believe the size of this rat,” Lenny told him, spreading his hands apart.

“You shot a rat?” he asked in disbelief.

“It was a mutant! I couldn’t think of anything else to do.”

“You could’ve killed somebody walking in the hallway.”

“You’re right,” Lenny said. “I didn’t think the bullet could go through these plaster walls.”

Henry shook his head. “Ya gotta be careful with those.”

“Where I drive and the weirdos that I pick up, I always carry a gun.”

Henry bent down, running his finger over the hole.

”I guess I’ll plaster it, then cover it with paint.”

He pocketed it, looking down.

“The hole is behind the couch.” He pointed to the wall.

Henry turned to him. “Wha’d you do with the rat?”

“I got Esther’s rubber gloves, picked it up, and threw him in a plastic bag. He must have weighed at least seven pounds.”

Lenny handed him the bag.

Esther came out in a red terrycloth bathrobe. “I don’t know what we’d do without you, Henry.”

Henry was the take care guy. The residents came to him with their everything. Sometimes it was hanging a lamp, installing electric outlets, putting air conditioners in, taking them out, changing a fuse, even helping the older ones reach things on the top shelf of the closet. They paid well, and he liked the people.

He was out of sorts though. First day of a new decade. 1980. The bullet hole unnerved him. Henry grumbled as he collected his pail, a bag of patching plaster, joint compound, and his tools.

Bessie, tying the back of her housedress, looked in on him. “Where are you going?”

Henry sighed. “I have to plaster a bullet hole in the fourth floor hallway.”

“And Lenny shot it?”

Henry nodded. “Why are white people so dumb?”

“Why are white people so useless?”

“Didn’t he ever hear of a mouse trap?”

“Remember when we found that gun in Henry Jr.’s backpack?” Bessie asked suddenly.

“Don’t talk to me about him,” he said, clutching his heart.

Henry pressed the elevator button to 4. When he got out, it continued its upward spiral. He walked down the hallway, finding the spot. He laid a small drop cloth, and kneeled down on it, in front of the bullet hole.

Henry used an all-purpose putty knife to carve out the hole in the hallway. Then he mixed a little water into the patching plaster and began to spread it with a spackling knife.

As he was on his knees, he saw a pair of yellow leather high-top sneakers stop next to him. He looked up to discover Monica Parker, the TV actress, though Bessie thought she was lousy on that soap opera.

“Thanks, Henry.” She stomped past him, her gym bag bouncing on her back.

As Henry worked, something caught his attention. Sticking out in the periphery of his vision field. He squinted. In the corner. Something gold. He crawled across the floor, turning to look in both directions to make sure no one saw him. When he picked it up, he immediately recognized it. A bullet cartridge.

Running his fingers over the smooth casing, he thought about when he’d last touched one of these things. Yes, he’d enlisted right after graduation. Got his high school degree like he promised his mother. First, he was in Texas for a few months, then France, and finally, Poland.

He’d been sent to Buchenwald. He’d seen the liberated Jews in their rags, so skinny, starved, sick, disgusting in their suffering. He couldn’t look at them as he passed out boxes of food and drinks. The way they grabbed, those thin, filthy, diseased fingers, the torn fingernails, the bleeding cuts…

And now he worked for one them. Saul, survivor of Auschwitz, was his boss, who yelled at him all the time. But Henry knew he couldn’t help himself. He tried to talk to him. “Mr. E, don’t sweat the small things.” Saul answered, “That’s all I can do.” Henry understood. He knew Saul was a kind man, a fair person, generous, and very stingy.

Henry would sometimes look at Saul and try to imagine him back there. Thirty-five years ago. Behind the barbed wire, when the gates were unlocked, when the remaining Germans were marched out to a waiting American transport.

Henry pocketed the cartridge. “He could’a killed someone with this.” Henry picked up the pail with the plaster and gave the hole a final swipe with the spackling knife. Afterwards, Henry knocked on the door of Suite 49. Esther answered. This time she wore a loose shirt and slacks.

“I need to fix the hole behind your couch,” Henry said.

They each took one side of the couch and pushed it away from the wall. “Just a little bit more,” Henry said.

They shoved the couch a few more inches from the wall. “That’s okay,” Henry said.

“I made some muffins with fresh blueberries. They’re still warm.”

Henry grinned. Whenever he did any work for Esther, she always had something delicious to offer him.

A few minutes later, he stood up. “This should do it.”

“You can wash your hands in the bathroom.”

“Thanks,” he said, peeking into her bedroom as he walked past.

“Sit down,” she said when he returned. “A cup of coffee?”

“Okay, but I can’t stay long. You know Saul is going to be yelling for me any minute.”

“He does scream a lot,” she said, sitting opposite him at the table.

“Does he seem more stressed out than usual to you?”

“Do you know anything?” she asked him. “About the sale of the hotel?”

“Thanks for taking care of everything, Henry. I can’t tell you how much we appreciate it.” She paused, looking down for a moment. “I nearly died when I saw that rat. It was so huge. Really. Bigger than a cat. And then when Lenny walked in with that gun, and I thought, I didn’t know what to think. But I have to tell you.” At that moment, she broke into a smile. “It was exciting.”

Henry took a bite of the muffin. “Very good,” he said.

“I still tremble when I think of it,” she continued. “Lenny holding the gun. The craziest thing I’ve ever seen since I moved into the hotel.”

“You don’t know.” She dropped her voice. “Can I tell you a secret?” She giggled. “That you can’t tell anyone?“

Henry looked at her. White women, he thought. “I’m falling in love, Henry,” she exulted. “At my age.”

“Sixty’s not too far away for me.”

She opened the door.

Sonia Pilcer is the author of six novels including The Holocaust Kid. The Last Hotel has been published by Heliotrope Books. She notes: “Serialization, shmerialization. If you want to read THE LAST HOTEL in its entirety, go to Amazon.com.”  Meanwhile, The Edge will be bringing you weekly serialization. Visit Sonia Pilcer’s web site here.