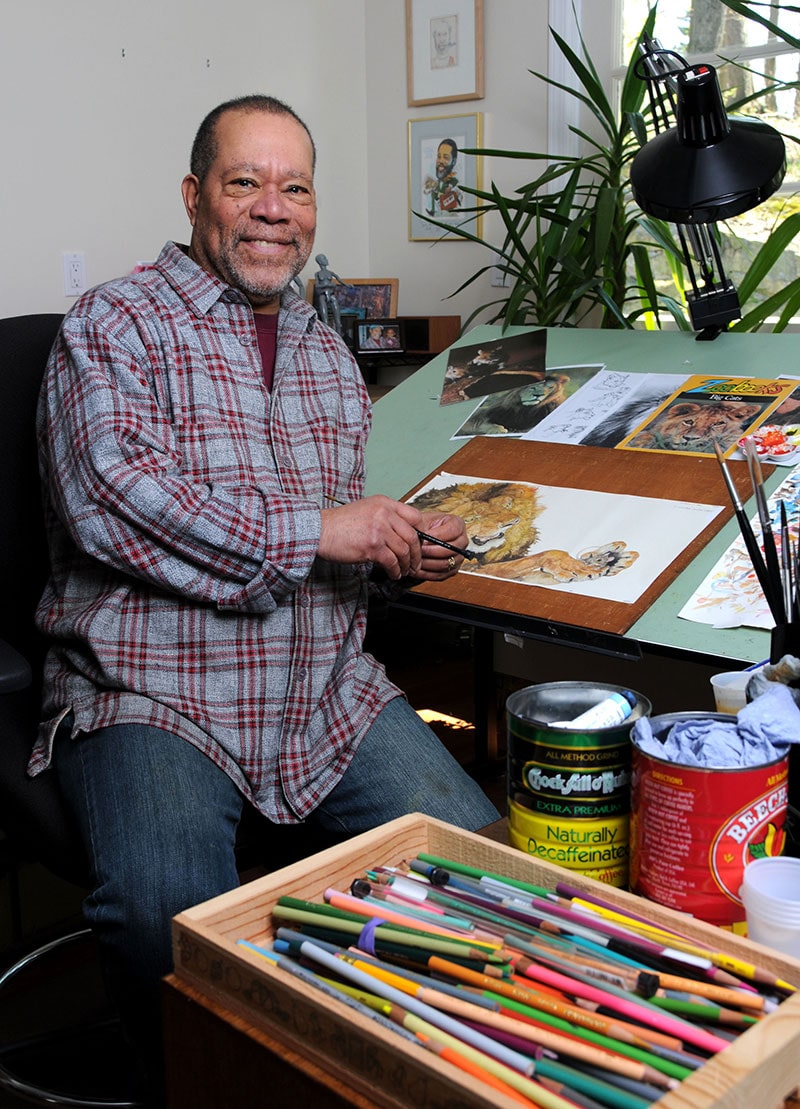 Stockbridge — Illustrator and Caldecott medalist Jerry Pinkney is no stranger to the Berkshires; in 2016-17, he was the Norman Rockwell Museum’s artist laureate and, among other locales, found a place to land at Muddy Brook Regional Elementary School in Great Barrington. During that time the gifted narrative artist spent time with third-grade students, who were participating in the NRM Passport education program, and he quite literally left his mark there: A Pinkney original painting of the school’s coyote mascot still hangs in the building’s foyer on Monument Valley Road.

On Saturday, Jan. 18, Pinkney will return to the Norman Rockwell Museum to share his creative process illustrating his newest book, “A Place to Land: Martin Luther King, Jr. and the Speech That Inspired the Nation.” Much has been written about Martin Luther King Jr. and the 1963 March on Washington, but there’s little on his legendary speech and how King came to write it. This book, written by Barry Wittenstein, changes all that. Kirkus Reviews says the book, “Gives readers a fresh and thrilling sense of what it took to make history”; Booklist says, “Wittenstein’s free verse, beautifully subdued, flows crisp and clear, leaving room for Pinkney to shine”; and the New York Times lauds “Barry Wittenstein’s poetic text [as providing] the cadences and repetition of a preacher, while Pinkney’s detailed, kinetic pencil and watercolor art incorporates bits of torn maps and sheet music and blurry period photos of marchers.”

“We’re honored and delighted to welcome Jerry Pinkney, one of America’s most loved illustrators, back to the Museum on Saturday,” said Mary Berle, chief educator at NRM. He’ll share his process to illustrate his latest book, “A Place to Land,” which is about the days leading up to Martin Luther King Jr.’s “I Have a Dream” speech. Two years ago, when he visited with local students, they were able to see Pinkney’s gallery sketches for this book as he was preparing; he remains instrumental in informing the education programs at NRM. The museum’s goal is to honor the extraordinary contributions of Martin Luther King, Jr. and also “create space for inspiration, reflection and conversation about the future we will create through civic engagement,” Berle added of the weekend-long celebration that coincides with Martin Luther King Jr. Day (and the 91st anniversary Dr. King’s birth).

Pinkney was presented with the museum’s Artist Laureate Award in June 2016. The award honors the contributions of outstanding visual artists whose exceptional dedication to the Norman Rockwell Museum and its mission have guided and advanced the work of the institution. It also recognizes the important role that illustration has had on the lives of children in Berkshire County and beyond. Former first lady Laura Bush presented Pinkney with the award; a former teacher and librarian, who has spent much of her life involved with major education initiatives throughout her life, Mrs. Bush once remarked, “a love of books, of holding a book, turning its pages, looking at its pictures, and living its fascinating stories goes hand-in-hand with a love of learning.” In December 2001, the former first lady called on Jerry Pinkney to provide illustrations for the “Home for the Holidays” display at the White House.

Pinkney, the illustrator of more than 100 children’s books, has earned the field’s highest honors, including the Caldecott Medal, Caldecott Honor Medals and Coretta Scott King Awards. “Witness: The Art of Jerry Pinkney” was organized by Norman Rockwell Museum in 2010, going on to the Philadelphia Museum of Art, High Museum of Art and the African American Museum in Dallas, among others. “Imaginings,” the museum’s current exhibition of the artist’s work, is now on national tour.

On Monday, Jan. 20, the NRM is hosting a community reading of Ibram X. Kendi’s book “How to Be an Antiracist” in the Four Freedoms Gallery. “We invite all to join in, take a turn reading, and listen,” said Berle of the book that, released in August, is already a New York Times bestseller. It is a follow-up to Kendi’s National Book Award-winning “Stamped from the Beginning,” in which the author explains that racism is ultimately structural and directs attention away from harmful, inequitable policies and turns that attention on the people harmed by those policies.“Kendi is one of today’s visionaries writing about the struggle for racial justice,” Berle added. The book will be read in its entirety, and readers will change every 15 minutes or so.

Also on Monday, the NRM Art Adventures program will focus on the new children’s book “Ruby Head High” by Irene Cohen-Janca. The story is about Ruby Bridges’ first day of school in a newly desegregated school in the 1960s, an event Rockwell captured in his “The Problem We All Live With.” “Can you imagine how Ruby felt that day?” is just one of the myriad questions that will inform the interactive family program perfect for elementary-age students to learn about the civil rights movement. Kids 18 and under are always free. “We’ll read, look closely at related paintings in the galleries, and we’ll make art in response,” said Berle.