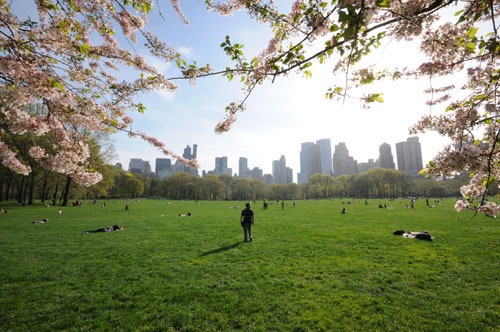 New York — Spring has finally arrived — it gets dark much later, and the streets have come alive. Lush flowers and trees are blooming in Central Park where upper-middle-class families are picnicking on the Great Lawn and solitary figures are sitting on benches reading, or, I assume, (probably wrongly) serenely contemplating their existence. I even see older men and women dressed in formal whites playing croquet and lawn bowling on one of the Park’s two manicured lawns reserved for those rarified games. Couples are out rowing on the lake, strolling in Sheep’s Meadow, and eating breakfast at outdoor tables at the Park’s

branch of Pain Quotidian — while tour groups clamber about the 36-acre Ramble, the Park’s artificially created “wild garden” with its varied topography, dense vegetation, many birds (over 230 species have been spotted there) and small stream. Like the Park as a whole, this more isolated area, once a scene of brutal muggings, has lost its feeling of menace and is now relatively safe.

May is the time of year I usually fly to London. But this spring I skip my annual visit, one that has turned for over forty years into an integral, even necessary, part of my life — friends to visit, memories renewed, and an immersion in the daily life of another great city. So I try to partially compensate for this loss by making an intense effort to be more observant when I walk through various city neighborhoods, especially my own.

One often stumbles on to perceptions about city life by accident, so as I set out one day to do some food shopping, a number of things strike my eye. On Lafayette Street in NoHo I pass the landmarked Public Theater — a richly designed 19th century Romanesque Revival structure housing a group that has played a prime role in the city’s theatrical life for decades, including producing the renowned Shakespeare in the Park. I’m grateful for the building’s physical splendor, because close by it, on Astor Place, there is a block-long monster, black glass tower, which dominates the area and emanates sterility. I’m always wary that the growing mass of these new glass buildings will sweep the past away in their wake. But the Public Theater building and Colonnade Row, an 1830’s landmarked series of Greek revival buildings containing Corinthian columns that stands across the street, remind me that not all that is architecturally graceful and striking has been obliterated in the city by developer greed.

My second experience is shaped by the fact that New York is filled with marginal people, a population that truly adds texture, color, and creativity to the city’s fabric; though there are some like the young, voluntarily homeless “crusties” (a name they apply to themselves) who lie aggressively sprawled on the sidewalk on Broadway. They arrive every spring unwashed, tattooed, often high and anti-social with their overloaded, filthy knapsacks, pit bulls, and cans of beer, asking for money. Their main purpose, besides seeing themselves as rebels against the “straight life,” seems to be to compete with genuinely homeless people for people’s aid. In their case marginality subtracts rather than adds to the flavor of urban existence.

Concluding my walk on the way to the supermarket, I pass by NYU’s elegantly conceived faculty apartment complex — Silver Towers — and I notice that NYU, in conjunction with NYC’s departments of Parks and

Transportation, has rebuilt the sidewalks and meticulously refurbished the planted area along East 3rd St. A seemingly exemplary act, but I tend not to take anything at face value. I know that NYU, which is also a real estate corporation with vast holdings, must (or should) have more than a tinge of guilt towards the tenants of Silver Towers. For it has compelled them to face years of disruption as NYU turns part of the complex into a construction site when it begins building its massive mixed-use Zipper building on the site of the old gym.

Just a few experiences I have had on a Manhattan spring morning. But there is always more to take in of the city’s inexhaustible variety. You just need to forget the obsession with one’s own self, and open up your consciousness to the world that lies outside.