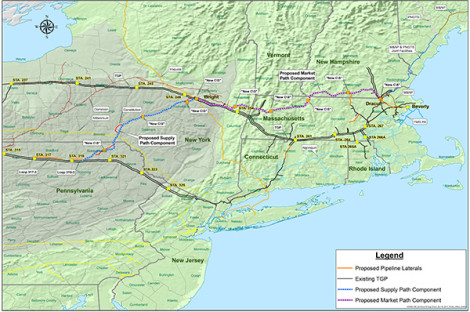 Proposed route of Kinder Morgan's Northeast Direct natural gas pipeline (in lavender in map above) proposed to have conveyed fracked gas from the Marcellus Shale in Pennsylvania to the coast of New England.

The NED project was highly controversial and the prospect of land seizures through eminent domain angered many residents along the proposed pipeline path. Residents and environmentalists were further infuriated to learn that much of the gas was for export. 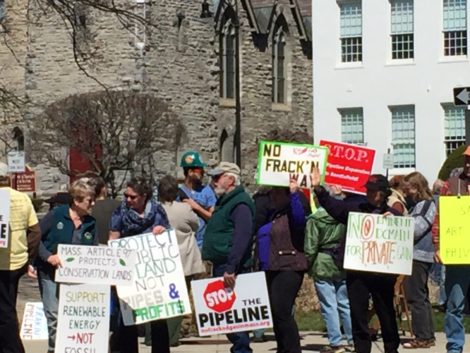 Suspension of the NED project does not appear to have any effect on Tennessee Gas’ Connecticut Expansion Project, a pipeline storage loop that is now a testing ground for the power of the Natural Gas Act and eminent domain. In order to build it, the company requires a slice of Massachusetts-owned and protected land in Sandisfield, Massachusetts. Tennessee Gas and the Massachusetts Attorney General’s office were in court just last week in case that may set a precedent since the land is protected by the state constitution under Article 97 and only the Legislature can undo those restrictions.

Kinder Morgan said the reason for the suspension is “inadequate capacity commitments from prospective customers.” The company said the project was approved initially “based on existing contractual commitments at the time by local gas distribution companies (LDCs) to purchase natural gas from the project, as well as expected commitments from additional LDCs, electric distribution companies (EDCs), and other market participants in New England. Unfortunately, despite working for more than two years and expending substantial shareholder resources, Tennessee did not receive the additional commitments it expected. As a result, there are currently neither sufficient volumes, nor a reasonable expectation of securing them, to proceed with the project as it is currently configured.”

The company listed several reasons for this. “The New England states have not yet established regulatory procedures to facilitate binding EDC commitments, that the process in each state for establishing such procedures is open-ended, and that the ultimate success of those processes is not assured.”

Kinder Morgan further said “innovations in production have resulted in a low-price environment that, while good for consumers, has made it difficult for producers to make new long term commitments. Further, current market conditions and counter-party financial instability have called into question Tennessee’s ability to secure incremental supply for the project. Given these market conditions, continuing to develop the project is not an acceptable use of shareholder funds.” 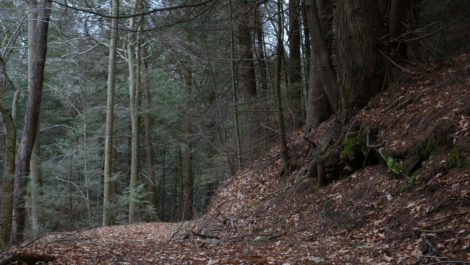 Old-growth trees in Otis State Forest were in the path of the proposed pipeline expansion. Photo: Ben Hillman

The company said it is committed to building more “natural gas infrastructure in the region,” and “will continue to work with customers to explore alternative solutions to address their needs, particularly local distribution companies that are unable to fully serve consumers and businesses in their areas because of the lack of access to abundant, low-cost domestic natural gas.”

Jean Atwater-Williams of STOP (Sandisfield Taxpayers Opposed to the Pipeline) told the Edge her group has heard nothing from Tennessee Gas about the suspension affecting the Connecticut Expansion Project in the Otis State Forest in Sandisfield, and said “Kinder Morgan has always claimed that these are separate projects though some of the same customers are being served.”

Atwater-Williams further said she feared the company would push the project through in order to set a precedent that even constitutionally protected land can be taken through federal law.