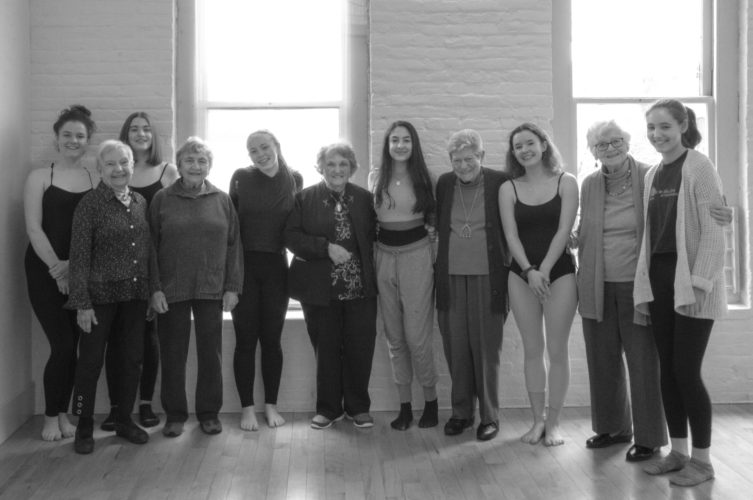 Housatonic — “I liked it so much I’m back!” is how Ruth Bemak sums up her return to the Rubin Mill, and Berkshire Pulse, for the second year in a row. And her two-generations-younger “partner” concurs: “I am very excited,” said Paige Lussier. “I was very drawn to [Ruth’s ] piece [and] although we have not been able to connect as much as we would have liked … I am excited for the process.” Bemak and Lussier are just one of seven pairs of participants building upon a collaboration that began last year between the Young Choreographers Initiative and Kimball Farms, the retirement community in Lenox. This unique, intergenerational project matches senior residents with young dancers to create movement pieces that combine poetry, prose and dance to tell the seniors’ life stories.

“It’s been a remembrance of many, many wonderful things that have happened in my life … that have made a difference,” said Diana Feld. “I may not have realized it as a kid, but I realize it as an adult.” Feld’s is but a single perspective as to what the process has been like for the seven writers and eight young choreographers who are working together to create pieces. The process began with Ian Spencer Bell working with the writers, and continued with Susan Quinn and Bell guiding the process of everyone working together throughout April and May. The YCI (launched in summer 2016) is an empowering project for high school-age dancers that builds confidence, inspires collaboration, encourages creativity and allows free expression; it has since expanded into a year-round program at Pulse. This project is an excellent example of the profound benefits that intergenerational arts programs have for all participants; namely, each generation benefits from the knowledge, creativity and experiences of the other.

“I think it’s been an awakening on my part as an older person,” shared Gwen Sears. “Sometimes people feel that their creativity somehow floats away … this [project] has reawakened so much possibility about bringing up thoughts I have, putting them on paper and sharing them with a younger generation,” she added. “It creates bonding. It’s exhilarating. This is something that will grow beyond me.” Sears is working with Cecilia Kittross on a poem called “Lily,” and on a recent Saturday afternoon during the group’s second meeting of the year, I was able to witness, first hand, various iterations of each individual collaboration as it was taking shape. When Kittross took to the floor, there was no music. She was a picture of composure, her limbs stretching like petals toward the sun in a series of slow, deliberate motions. She was graceful, her arms rising in unison, both tentative and contemplative. I felt myself holding my own breath as each move unfurled like the white, cloying petal she endeavored to embody.

This is not to say the collaboration has been free from hiccups. “It’s been a real challenge because my dancer is a student at Harvard,” said Dorothea Nelson. “[While] we’ve not had a chance to meet face to face … she’s certainly challenged me to find other ways to communicate. I managed to record my voice for her, and I managed to access the many drafts she’s done, and it’s very clear to me that she does understand what I’ve found to be so magical about singing.” Lois Neumann shared her own challenges: “[Rubielle Nejaime] and I have had difficulty connecting [mainly due to my] ineptitude on very basic technology,” she explained, which makes perfect sense: The current generation, adept at navigating iPhones and the panoply of communication platforms imbedded within them, was often pushed to find alternate means of connection. And, at the end of the day, their time spent face to face was most valuable. Neumann expressed her admiration of Nejaime’s courage in taking on what she called a “rather long and strange story.” When Nejaime took to the floor to share her interpretation of “Fearsome Things,” it was anything but long and strange. As laughter floated up from the playground below, a series of staccato string notes wafted through the studio. Nejaime made her way up from the floor–first going to her knees, then her back and finally to her feet–in a series of swift, sure, uplifting movements. Her pace, quick and frenzied, then employed—unexpectedly—four other dancers in a flurry of fervent movement across the room’s diagonal. Finally, at center stage, a swell of audibly pulsing beats erupted and Nejaime’s breath matched the pace of her swirls. She ended with a series of expressive shoulder rolls and overhead arms in sweeping motion, utilizing the full scope of the space afforded. “It has really helped me as a dancer to turn literature into a story via dance,” explained Nejaime, whose piece ended on a high note amid exultant spiraling and with flushed cheeks. This, perhaps, is the very place from which the richness of the collaboration stems: different generations, with different life experiences, converging on a common stage.

Despite the myriad differences in each life story and subsequent interpretation, there was a common thread binding each to the next: the responsibility of conveying another’s story—in particular, through movement. The final young women to grace the stage, a pair of choreographers interpreting Patricia Moynahan’s “Ciao!”, were Stella Wright and Pearl Wright. The dancers had a single prop, a red hardshell suitcase, which they wheeled into the center of their space upon commencing. The pair employed leaping, bounding, dragging, rolling and repeating in their collaboration, both with one another and in the telling of Moynahan’s story. I witnessed multiple moments of clear synchronicity that ultimately gave way to a playful pushing of the suitcase back and forth before it was finally used as a seat. Each performer then paused, rested her chin in her hand, with elbows on respective thighs, before reflecting. Perhaps on a life well lived? Or, if nothing else, a well-traveled trip. The content, of course, is relatively unimportant; rather, it is the process, bathed in the proverbial limelight, that takes center stage.

“It’s easy to feel alone in a rural community,” said Bell. “This project reminds me that no matter where you are, no matter the stage of life, you are not solo—you have your body, the stories of your life, you have the stories of others. You have imagination.”

The Moving Life Stories Project will be presented twice in June: Saturday, June 15, in the auditorium at Kimball Farms; and on Sunday, June 16, at Saint James Place, Great Barrington. Both performances will take place at 3 p.m.