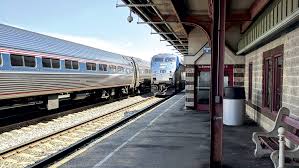 On Tuesday evening, March 12, the Massachusetts Department of Transportation held its first public meeting about the East-West Passenger Rail Study. A standing room only crowd of people from all over western Massachusetts packed a large classroom in the UMass Center at Springfield. Jennifer Slesinger, MassDOT project manager for the study, gave an informative presentation which included an outline of the broad categories of alternative services being considered. During the coming month MassDOT’s consultants will develop six specific alternatives, of which three will make it to a final round this summer.

We view with grave concern a seemingly new alternative for express bus service on the Massachusetts Turnpike. This is clearly an attempt to meet demands for high-speed transportation, including a Springfield to Boston travel time of 90 minutes. That’s an admirable goal, but a bus rapid transit service using the Mass Pike is not.

What do Boston, Framingham, Worcester, Palmer, Springfield, Westfield, Chester, and Pittsfield have in common? All have train stations in their residential downtowns.

We strongly agree with Secretary of Transportation Stephanie Pollack about the advantages of trains. As summarized in MassDOT’s minutes of the December meeting of the East-West Passenger Rail Advisory Committee, “Secretary Pollack said there are a lot of people who would prefer taking the train over driving a vehicle – even if the travel time is the same or longer – because they can be productive on the train. She noted South Coast Rail’s projected travel time between New Bedford and Fall River and Boston is 90 minutes, and the models project the ridership to be robust. She suggested that the Committee should not be deterred by a longer travel time alternative. She said the statewide congestion study shows high variability for arriving on time by vehicle, and a train has the advantage of a smaller variability (higher chance of being on time); reliability and consistency can be more important to some people than the travel time.”

Longer travel times on a train, as Secretary Pollack said, should not be a deterrent to developing the right alternatives for passenger rail service to western Massachusetts. Far better we have trains serving our downtowns, providing comfortable, productive rides across relatively long distances, than to have faster, less pleasant and less productive rides on bus service stopping at Mass Pike parking lots that aren’t even close to downtown. And if the bus leaves the turnpike to travel downtown, especially from Auburn to Worcester, there goes the savings in time!

Western Mass leaders and activists need to unite around passenger rail service. We propose formation of a Western Mass Rail Coalition to create the united front necessary to ensure that MassDOT understands the needs of our large region of the Commonwealth.

Activist groups including Trains In The Valley, The Train Campaign, Citizens for a Palmer Rail Stop, and activists in Chester and throughout the four counties must come together to create and implement a plan of action that addresses all our needs, and that guarantees we achieve our goals.

This isn’t just about preferring trains to buses. This is about revitalizing economic growth across Western Mass. It’s about solving Boston’s housing crisis by attracting new residents to live the good life in more reasonably-priced homes in our cities and towns. It’s about redressing inequality of opportunity for working people and students living in economically-depressed urban areas, and neglected rural areas, which lack adequate transit options connecting them to regional employers and educational institutions, and to the hot economy in the Boston area.

This is about sharing the wealth throughout our Commonwealth.

Time for citizens and businesspeople across Western Mass to meet and unite in our campaign for train service!

Co-founder, Trains In The Valley