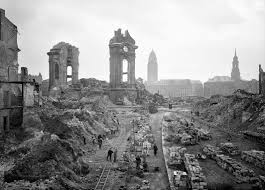 On February 13,1945, Dresden, Germany, was bombed by Allied planes, resulting in a firestorm that destroyed the city and most of its inhabitants.

West Stockbridge — February 13 marked the 70th anniversary of the infamous bombing of Dresden by British and American Bombers, which has come to symbolize the merciless destruction wrought by the Allies in its bombing campaign against Germany, and, in the end, made the policy of bombing Germany, even in the fog of war, a very public controversy. In Europe, and in Germany and Britain in particular, the anniversary has been the occasion of a newly invigorated debate on the ethics of the Allied Bombing Policy.

In particular, the Archbishop of Canterbury Justin Welby was widely ridiculed in Britain’s jingoistic press for expressing his “profound regret and deep sadness” over the Dresden bombing in a remembrance service held in that city. Unfortunately, British Prime Minister David Cameron, and many in his party, have sided with the jingoists. Oddly, there has been little or no talk of Dresden in the American Press, even though more than 500 U.S bombers were involved in the raid. It is, in any event, worth reflecting upon: I shall do so here. 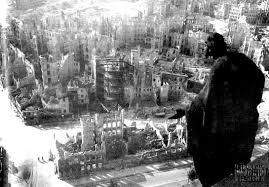 The skeletal remains of buildings in Dresden after the firestorm.

As a child I was more or less fed the following history of the bombing campaigns in World War II; and I highly suspect it is somewhat close to what most of us were brought up with: Hitler and the Nazis began the whole policy of bombing civilian populations in large cities in a effort to break the morale of the enemy. Besides the barbarity and inhumanity of the venture, utterly typical of the Nazi’s wartime policies, the plan was a clear strategic failure. If the Luftwaffe had concentrated its efforts on destroying RAF airfields and other targets important to war production, it may indeed have gained its elusive air superiority over Britain necessary for any invasion involving ground forces. Also, British morale did not at all weaken in response to the bombing. If anything, it stoked further anti-German antipathy among the British, and probably hardened their resolve to defeat the Germans at all cost. Soon, the RAF rallied, with its marvelous Spitfires and Hurricanes, to win the Battle of Britain, and Hitler had to suspend plans of an invasion of Britain .

At this point the popular history becomes a tad murky: We know the allies engaged in their own air assaults on German targets for the duration of the war. But, surely they would not have been so barbaric, and imprudent, as the Germans, so as to target civilian populations, all on the bogus precept of weakening enemy morale. Or would they?

The horrifying fact, epitomized by the bombing of Dresden, and dozens of other German cities on the Allied Bomber Command’s “Hit List,” is that they did exactly this. The allied policy for bombing Germany was, in fact, a mere extension of the Luftwaffe’s policy for the blitz, to target the most densely populated areas of the most densely populated cities in Germany in order to destroy as many houses, and to terrorize as many people as possible. This policy was set out in black and white by the British government in a February 1942 directive, quoted by Steven Garnett in his excellent article on the subject, published in a volume of critical examinations of the allied bombing strategy published in 2010 by Bergham Books: From henceforth the “bomber offensive” was “to be focused on the morale of the enemy civil population.” A follow-up directive further specified that, “the aiming points are to be built up areas, not, for instance, the dockyards, or aircraft factories”(27). 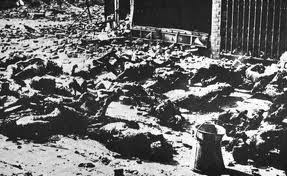 The remains of Dresden inhabitants caught in the 1945 firestorm.

Although Winston Churchill must be ultimately held to account for his Bomber Command’s “Area Bombing” of German Cities, such a policy was certainly not his idea, but more likely the brainchild of two men, who probably deserved prosecution for war crimes : The first was the Frederick Lindeman, Lord Cherwell, the German émigré physics professor, and member of Churchill’s war cabinet, who repeatedly advocated air-attacks for the principal objective of influencing enemy morale, and was particularly influential because of his personal relationship to Churchill, over whom he held enormous sway in all sorts of wartime decision making.

But, Lindeman had also some rather frightening private opinions of his own, which Churchill certainly did not share, such as his support of eugenics; both racist and deeply contemptuous of the lower classes, Lindeman probably felt little compunction at the idea of destroying working class houses in air raids (Scientific American, Aug 6. 2010).

The other chief culprit is Arthur Harris, the military head of bomber command, who relentlessly advocated the crack-pot theory that bombing Germany alone could win the war, that obliterating large urban centers was somehow a path to victory in itself (Garnett 29).

The Casablanca conference in January of 1943 led to “Operation Point Blank,” for which bombers were deliberately instructed to attack German cities. Far from being commanded to concentrate attacks on the industrial works that surrounded many large German cities, and to some extent Dresden, bombers were asked to attack the most heavily built-up areas, the so-called “red zones,” in effect, to ignore war-supporting industry in favor of the most densely populated civilian targets (Garnett 30). Despite the proven effectiveness of targeted attacks on war-supporting utilities, used in support of the D-Day landing, the targeting of German cities continued once the Allies had gained a foothold on the continent. Yet, Germany’s war production, despite years of allied bombing of its urban centers, continued to rise until mid-1944. Even after the development of new, long-range American fighter escorts, such as the famous Lightning and the Mustang, which made more precise, daylight bombing feasible, the Allied Policy on bombing Germany did not change. Even an American Air Force, which had begun with targeted bombing campaigns, and then switched to the nighttime areal bombing of cities in response to heavy daytime losses in the air, refused to revert to its former policy of targeting Germany’s war-making capacity after the arrival of the long-range fighter escorts. Instead, the bombardment of German cities, on the bizarre pretext of influencing morale, was given a second wind, in late 1944, and 1945, leading to the atrocious bombing of Dresden in February 13 of that year, and many, many others. A well-balanced BBC documentary from 2001 examines these policies very thoroughly, and can be viewed here:

On this evidence, it is impossible to state otherwise than that much of the strategy adapted by the Allied Bombing Command was morally indefensible. The supposed pretext of shaking German morale, which had been shown to be impracticable, could have also been used to justify any wartime atrocity under the sun, such as executing prisoners of war, and massacring occupied populations. The idea that the Allies had no choice but to bomb German cities in 1942, because it was the only means of showing the public that they were actively fighting the Germans, when daytime precision bombing would have been too costly, does not seem to me to justify the targeting of civilians, which is always wrong.

Besides, Britain had already been at war with Germany over an extended period, from September 1939 to May 1940, with little in the way of an active campaign of any kind; and, furthermore, the justification, slender as it is, is obliterated after the landing of Allied Troops in North Africa in November 1942, a campaign engaged upon not least in order to show that the Allies were actively fighting back. Yet, for some reason, the bombing of German cities did not even go into full gear until after the Allied counter-offensive in North Africa. By 1945, when allied forces were fighting the largest direct ground battles of the war against German armies, the bombing of German cities was at an all time high. In the end, 70 percent of all allied bombs dropped in the war against Germany were released over general areas, rather than specific military targets, so that Marshal Harris could cross out German cities, one by one, from his “hit list” (Garnett 37) An effective strategy could have been to repeatedly attack military targets, which, even with many bombs dropped off-the mark, would eventually have been successful, obviated and would have stymied any chance the Germans might have had to rebuild structures of great importance to its war effort. Yet this was not the allied policy.

I find it fascinating that so-called conservatives, who spend a lot of time lamenting the liberal campaign for moral and cultural relativism, are so ready to defend the Allied Bombing of Germany on relative grounds. For many, targeting civilians is acceptable, and even preferable, if the war is important enough; torture, too, is to be allowed, when circumstances call for it. But the truth of the matter, which is neither right-wing nor left-wing, is that some practices are by their nature immoral and always wrong to engage in. To deny this, is to an embark on a dangerous path, in which we can justify most anything we set our minds to, as long as we feel passionately enough about it.