Billionaire Jeffrey Epstein and four of his victims.

Just the suggestion of justice is making my week

I was a Peace Corps volunteer in the Highlands of Papua New Guinea, where I worked at a high school surrounded by coffee fields. It was a beautiful, wild place. My students were far and away the most committed to their educations of anyone I’ve taught in 26 years. But it was not safe. PNG women could be expected to be beaten and raped as a matter of course. The domestic violence rate in the Highlands was estimated at 100 percent.

I was told not to go anywhere alone, but I was an American girl used to doing my own thing, and used, especially, to jogging wherever and whenever I wanted. One afternoon, after a month of no jogging, I said to myself, “Hell with it! I need to live my life,” laced up my Nikes and ran into the fields. At first it was lovely, freedom, exotic birds and red flowers streaming by me. But as I headed up a dirt track between rows of coffee trees, two men—who’d been stealing the beans— stepped out to block my way.

One grabbed me by the shirt, then brought back his other fist to punch me. I screamed for help, managed to pull away and sprinted back to campus. I ran to the administrative office, where I called the local police station and earnestly reported an attempted rape, describing the men in meticulous detail. The responding officer sounded amused. He made a tsk tsk sound and said, “So sorry.” The two men, I later heard, went bragging around the market that they’d raped an American girl in the coffee. “So sorry.” I stared at the phone in my hand, realizing for the first time, at 24, why people were willing to die to reach American shores.

This PNG experience, and many more like it, is why—despite our wasteful ways, our devastating addictions, our blinding biases— I’m a big fan of America. Specifically, American law and order. It’s one reason why, on July 4th, I sing all the patriotic songs loud and proud. America the beautiful. The Battle Hymn of the Republic. The Star-Spangled Banner. We are a nation of laws, and this week, unlike in far too many recent weeks, it feels like the law is winning. It feels this week, if just for this week, like our law exists to protect the vulnerable, not to facilitate the cruelty of entitled men. 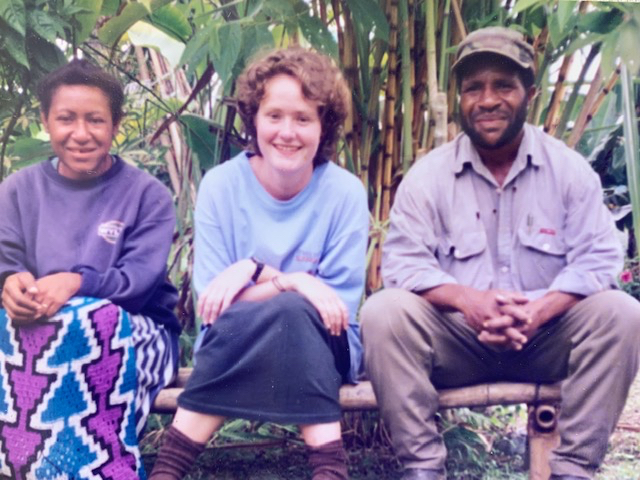 The author in Papua New Guinea in 1997 as a Peace Corps volunteer.

This week my heroes are Geoffrey Berman, the U.S. Attorney for the Southern District of Manhattan, and Bill Sweeney of the FBI, who announced federal charges Monday morning (July 8) against a prosecution-averse billionaire sex predator and pedophile named Jeffrey Epstein. (I would have preferred to hear from Soccer Team U.S. Captain Megan Rapinoe at the podium, but you can’t have everything.)

Berman and Sweeney held a joint news conference (see video below) to announce the sex trafficking and conspiracy charges for acts committed between 2002 and 2005 against underage girls, who were paid by Epstein for their services. Some girls were just 14, a year older than my little girl, with her braces. Berman did not describe how Epstein found these kids initially, but he apparently paid girls extra to recruit their classmates, neighbors and cousins for his pleasures, which included nude massages that culminated in various sex acts. (My favorite line in Berman’s announcement: “They deserve their day in court, and we are proud to be standing up for them by bringing this indictment.”)

The news conference was a satisfying 20-minute slap-in-the-face to the joke on justice played in Florida in 2008, when money and influence won the day. Back then, thanks to the brave step forward of one of his underage victims, Epstein was charged with these same crimes. But, thanks to his top-dollar defense team and the wimpy acquiescence of then-prosecutor of Alex Acosta — now, naturally, our Labor Secretary — his punishment was negotiated down to nearly nothing. He was not charged in federal court. He was not prosecuted. Powerful men sitting around a comfortable conference table took care of each other. Epstein plead guilty to soliciting prostitution in state court, a much lesser charge. He registered as a sex offender, paid some restitution to some victims, and was sentenced to county jail for eighteen months. 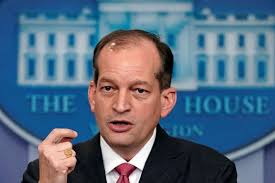 Here’s the banana republic part of the Florida story. Epstein didn’t do jail the way regular people—poor people, people of color, low level drug offenders— do jail. He left jail six days per week, to keep his regular work schedule. Just to further clarify the state of law and order in the late aughts: trade a joint for a burrito, spend two years in a 10-by-10 cell with visits from your mom once in a while. Do irreparable psychological damage to dozens of vulnerable American citizens, spend 18 months in your corner office, earning millions. Oh, whoops, 13 months. He was released five months early and threw a big party to celebrate. His victims learned all this after his non-punishment was meted out and they ultimately had no recourse.

Even in the Highlands of Papua New Guinea, sex offenders against young girls were beaten by police with batons and pistols when they got caught.

But perhaps things here have changed. This week the American public enemy number one is Jeffrey Epstein, whose 45,000 square foot, seven-story townhouse on the Upper East Side features a 15-foot set of entrance doors and heated sidewalk. We the People stand against Mr. Heated Sidewalk, and with 36 unmoneyed, unconnected young women. This might just end well for We the People. We’ve seen that even the most expensive lawyers in the land can’t protect the careers, freedom or reputations of Bill Cosby, Harvey Weinstein or Les Moonves.

Epstein has no company title to hide behind, no family members to share the shame with. Berman was the dullest of speakers, but when he pointed to a poster board with a photo of Epstein’s face and called for anyone who had been victimized at his hands to call 1-800-CALL FBI, I felt a thrilling surge of hope. (What an infrastructure they must have set up, I thought, what resources made available in those call centers, to handle the influx of calls valid and frivolous that would be coming their way! They’re putting real money into justice for these girls!)

On the indictment itself, the name EPSTEIN appears in bold type 91 times in 14 pages, while other characters in the disgusting story of his disgusting life are Minor Victim 1, 2 or 3 or Employee 1, 2 or 3. EPSTEIN’s public humiliation feels all the more appropriate considering the fact that EPSTEIN is apparently camera and media shy. EPSTEIN hates publicity. He does not get his photo taken, and never grants interviews. So sorry.

As for our media-voracious creep-in-chief, any of the depressed souls who feel compelled as I do to follow the sex crimes (24 and counting) alleged against him could have scripted his smirky comment about Epstein, in a 2002 New York Magazine profile. “It is even said that he likes beautiful women as much as I do, and many of them are on the younger side.”

Yes, Mr. President, in this instance you were not lying. They were on the younger side. Eleventh, tenth and ninth grade young. Children whose difficult life circumstances made them, in Berman’s words, “particularly vulnerable to exploitation.” But it seems entirely in keeping with his character that our president would call his buddy the sex trafficker in underage girls a “terrific guy.” As it seems entirely in keeping with Bill Clinton’s that he partook at least of Epstein’s private jet and private island, if not in his private crimes.

Sometimes it feels to this former Peace Corps volunteer like the two stealing, lying, bragging would-be rapists in the Papua New Guinean coffee fields so many years ago have more in common with today’s American government than I or any other woman anywhere does. God knows for every open air #MeToo story, there are ten thousand more that will remain forever under lock and key in shattered hearts the world over.

But I sing America the Beautiful because in this beautiful country, this week, the indictment against the billionaire with princes and presidents for friends does not say: