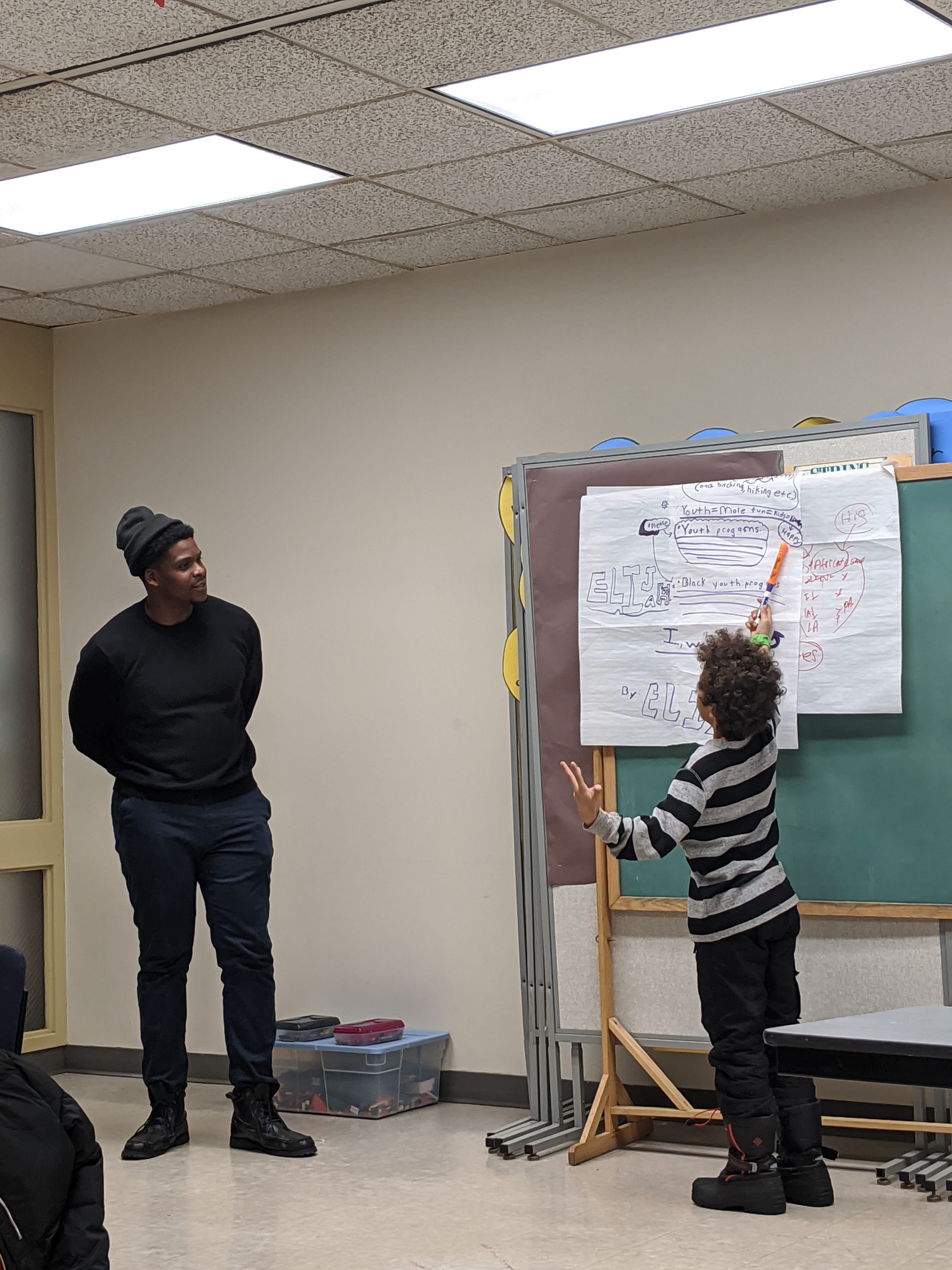 Jerome Edgerton Jr. and a SESSIONS participant get to work on life skill and athletic training together at the fledgling program in Pittsfield. Photo courtesy SESSIONS

Pittsfield — Jerome Edgerton Jr. is looking to create a wave among young men and boys in the Pittsfield community, and it all began with a casual conversation. Edgerton recalls it like this: He was returning home after going out for food early last summer when he ran into a local mother. She got to sharing about her son and the struggles he was facing; when Edgerton left that conversation, it was with a firm conviction: “I can’t go another day within this community, and not do my part.” He began to analyze what that might look like — in particular how he might put his skill set and inherent abilities to work — and that week he posted a message to Facebook: “I’m going to be at [Dorothy Amos] park, starting every single day at 6PM,” he announced, and that was the launch of SESSIONS Athletic Training. “It started as basketball,” the Pittsfield resident told me in a recent phone interview, “and using [the sport] as a tool to get our young kids [hooked] to then teach them discipline and other life skills.” Now that snow has blanketed Pittsfield’s parks and playgrounds, Edgerton has moved his SESSIONS indoors and, along with a handful of other mentors, welcomes boys and young men ages 13-18 to join him on Tuesday evenings at Conte Community School between 6 and 8 p.m. to continue creating a wave of positive change.

“Using something that they love as a vehicle to open their eyes to a different way of living,” is how Edgerton sees it. Over the summer he had, on average, eight to 12 young people turn out every single day to shoot hoops and talk about life. Edgerton estimates well over 100 kids were reached throughout the summer. The kids, ranging in age from second to eighth grade, got him thinking: How do we take what we do and reach some of the older boys? And that is where SESSIONS Life Skills comes into play. Since Nov. 12, Edgerton has been meeting with a small but consistent group of young men; Tuesday, Dec. 10, will mark their fifth session, and Edgerton is hoping to spread the word.

“It’s really something I hold dear to my heart,” said Edgerton, who has been passionate about working with kids in the community for the past 12 years — passion that permeates each of the myriad roles he holds. Edgerton, who works as a youth employment specialist at MassHire and a minister at New Generations Global Ministry, is keen on one thing: providing a safe and effective environment that will allow development and growth to happen in all aspects of young men’s lives. Originally from New Rochelle, New York, Edgerton spent the majority of his youth in the Berkshires. As a young person, he remembers being impacted by Youth Alive!; otherwise, “there were no programs for young Black males who were really struggling and trying to find their identity, trying to figure out why” — namely, understanding the society we live in.

As to what motivates Edgerton in his work? The community as a whole. “I am a really driven individual to see change,” he said. “Not just to see change that we talk about, but to see real change in the youth that we serve on a daily basis.” Edgerton, who is known as “Coach” to many, had a stint coaching junior varsity boys’ basketball at Pittsfield High School, the very institution from which he graduated prior to earning his degree from Nichols College. It is not unusual for him to hear from the young men he’s impacted, both on and off the court, particularly after they have moved on and come to see first-hand the fruits of their work together. These men reach out to him on Facebook and cut straight to the chase: Do you even know where I’m at right now? Do you even understand the work that we put in, where it took me in my life? “Seeing my kids — the youth in this community just grow — that’s the motivation that is at the crux of what I do,” Edgerton said. So has becoming a father. When thinking about his son, Edgerton likens his work to  “paving a road for him to drive down,” a road that, despite the bumps along the way, will have residual ripples for many.

While the target audience for SESSIONS is young Black men and boys, Edgerton reiterated that everyone is welcome. “We are not going to turn [anyone] away,” he said of the weekly sessions, open to anyone who may feel marginalized and unsupported: other minority groups, underprivileged individuals, young people with disabilities, those in the LGBTQ+ community. “It’s really geared toward making people who feel like they haven’t had a voice, they haven’t had a vision, they haven’t had hope — it’s really geared toward them.” If Edgerton has a message for these young people, it’s this: “You are more than enough; you are more than capable just the way you are.” This is an integral message, considering the myriad barriers to success faced by young Black men in particular. Edgerton likes to start each session by putting individuals in the mirror as a means of helping them to understand who they are as men, in particular young men, and understanding what the true definition of manhood is. He calls it, “really laying out a new perspective,” one that not only allows them to “dig in” to the work, but also allows them to “begin seeing their vision, and identifying their purpose.”

Systemic barriers abound — defined as policies, practices or procedures that result in some people receiving unequal access or being excluded — and Edgerton is on hand to talk about them. He works with young people on comprehension — of a basic standardized test, for example, or paperwork needed for a driver’s license or scholarship — with hopes of averting discouragement. They hit on travel — getting transportation from Point A to Point B — and options for employment. Edgerton knows the trends all too well: young Black men, when challenged to find their first employment experience, can become easily discouraged. They then sit at home, which can lead to depression, or they pursue alternate paths. It’s a pattern fueled by a script that sounds like this: “If I can’t go and find the opportunity, I’ll start to create my own — not knowing, really, the positive way to create their own takes them down a negative road that then enters them into the juvenile system.” This is why, at the end of the day, Edgerton is modeling for these young men the importance of knowing who they are before tackling the pervasive barriers. And “not letting them be a roadblock.”

As founder and managing director at SESSIONS Life Skills and Athletic Training, Edgerton hits on career readiness, an arena in which he has extensive knowledge. He covers the basics of resume writing, interviewing, how to carry oneself as a professional, how to talk on the telephone, and what to consider when providing a reference. “Lack of opportunity, lack of self- awareness, [these are] the barriers that keep some of our youth from reaching their success,” Edgerton emphasized. He is currently recruiting young men and boys, ages 13-18, for his weekly Tuesday meetings. Edgerton has created partners within the community to offer training in the six core elements within SESSIONS: education, technology, career readiness, mindfulness, athletics, and music expression. Current partners, including Chad Robertson and Ari Zorn, provide expertise in their given arena, and every Tuesday there is a different focus. In short, “every week, [participants] are getting a new area of their lives to work on that will create a holistic experience for them.” SESSIONS is also backed by the NAACP Berkshire County Branch.

If Edgerton had to distill his message down to a single takeaway, it would be this: “No matter where we go . . . we’re going to step out as a powerful unit, and we’re going to create this wave of momentum and positivity that will affect our community.” Edgerton is a firm believer that this wave starts with our kids. “If our kids are excited, if our kids are after it, if our kids are wanting change — putting their hands to the plow — then the adults, right in kids’ lives, will start to see the change,” Edgerton emphasized. This is the wave he is talking about, one that then ripples from kids to adults and spreads throughout the community, which is why Edgerton is looking to the kids. “[They have] a seriously profound impact within this community that they don’t even know that they can have,” he said. “These boys have something to say, and we’re seeing it every Tuesday.” For more information on SESSIONS, contact Jerome Edgerton Jr. at sessionslifeskills@gmail.com.