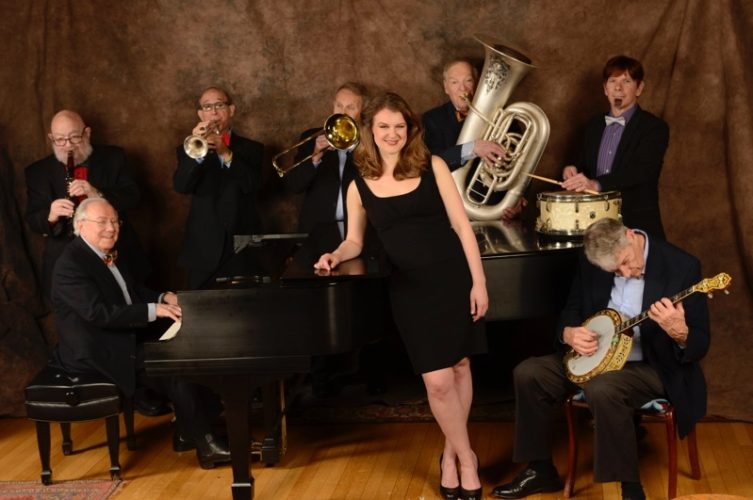 Here is Eli & The Hot Six at Scullers Jazz Club in Boston:

The group’s approach honors the New Orleans tradition of ensemble improvising while featuring the solo brilliance of its distinctive, contemporary musical personalities. Jazz singer Rebecca Sullivan adds an additional instrumental voice to the ensemble, in addition to her own deeply-felt interpretations of iconic vocal masterpieces, from “Honeysuckle Rose” to “Perdido.” The new disc and show also feature some of Boston’s finest, legendary musicians: Eli Newberger on tuba, Bob Winter on piano, Herb Gardner on trombone, Bo Winiker on trumpet, Ted Casher on clarinet, soprano and tenor saxes, Jimmy Mazzy on banjo and vocals and Jeff Guthery on drums.

Eli Newberger is a famed musician. Classically trained at Juilliard and Yale, he is a virtuoso jazz tuba and keyboard player who has cut more than 40 records with the New Black Eagle Jazz Band, which he co-founded in 1970. Dr. Newberger also won three national readers’ polls for best jazz tuba player. Often with banjo player/singer Jimmy Mazzy, he delights his audiences with musically illustrated lectures on character building.

Eli Newberger is also a highly-lauded and world-renowned pediatrician affiliated with Harvard Medical School and Children’s Hospital in Boston. Known for his ability to apply good sense and up-to-date science to unresolved issues of family life, he has been a pioneer in identifying and treating child abuse and family violence.  He is often called to testify in legal cases and is a high profile media personality, having appeared nationally on The Today Show, ABC World News Tonight, CBS Evening News, NBC Nightly News, Nightline, CNN News, The Oprah Winfrey Show, 60 Minutes and National Public Radio programs such as Here and Now.  In the Boston market, he has appeared on The Connection and Radio Open Source with Christopher Lydon, CBS News Boston, WCVB 5 News, 7News Boston, NECN News, NECN’s Broadside with Jim Braude, Boston Public Radio, Greater Boston with Emily Rooney, WBUR FM’s Radio Boston, WCVB TV’s Chronicle among others.

(Newberger is also the classical music reviewer for The Berkshire Edge. To see his articles, click here.)

With girlish sophistication, gleaming intelligence and three-octave range, jazz singer Rebecca Sullivan, a Pennsylvania native, is at 31 already a full-blown original — someone who stands apart from all the standards singers now crowding the field not only with her distinctive style, but also her eagerness to take risks. Rebecca received her Masters of Music Degree in Contemporary Improvisation and Voice from New England Conservatory of Music in May 2014. In a quirk of circumstance, she and Eli Newberger were assigned to one another as mentee and mentor.  After sitting in with his band in 2012 at their gig at the Sherborn Inn, the Hot Six and fans wanted her back!  She’s now based in New York, works in the offices of the Metropolitan Opera and shows up in Boston for gigs with the Hot Six.  Rebecca has a fine website, https://www.rebeccasullivanjazz.com.

Bob Winter, unassailable dean of Boston jazz pianists, is a veteran performer in all manner of musical situations and styles, in solo, duo, trio and small group settings. Since 1980, Bob has been the pianist with the Boston Pops and Pops Esplanade Orchestras, with Keith Lockhart and John Williams, conducting at Symphony Hall and for many tours and recordings. Bob joined the faculty of Berklee College of Music in 1972, where he is still a professor of piano.

Bo Winiker, a graduate of New England Conservatory, plays trumpet, flugelhorn and vibraphone. Bo recently fulfilled his lifelong dream of conducting and soloing at Boston Symphony Hall, where he led the Boston Pops Swing Orchestra during the opening night of both the 2013-2014 and 2014-2015 Symphony Orchestra seasons as well as the sold out 2013 and 2014 New Year’s Eve galas. He toured worldwide with the NEC’s Grammy® Award-winning Ragtime Ensemble, under the direction of Gunther Schuller as well as with the Stan Kenton Orchestra. In addition, Bo has appeared as a soloist with the New York Philharmonic and the Cleveland Orchestra and has also recorded on the movie soundtrack A League of Their Own with Billy Joel. Bo performed at the White House for President Ford and at two Presidential Inaugurations, for Presidents Carter and Clinton.

One of the busiest jazzmen in New England, clarinetist and saxophonist Ted Casher grew up in Skowhegan, Maine in a family of musicians.  Ted’s career spans studying and teaching at the Berklee College of Music, clarinet performances with front-rank traditional jazz stars like Louis Armstrong, starring as solo clarinetist in bands that revive the legacies of Benny Goodman and Artie Shaw and playing tenor sax in big bands from the legendary Duke Delaire Big Band at Bovi’s Tavern in East Providence and Peter Duchin’s Orchestra performing everywhere at society dances. Ted is renowned for his fluent improvisations, exquisite sound, klezmer inflections and boffo sense of humor.

Jimmy Mazzy enjoys iconic status as both a banjoist and vocalist on the American jazz scene.  For more than 40 years, this consummate musician has delighted followers of traditional jazz with his uniquely lyrical banjo style and his wonderfully haunting vocals.  He is featured on more than 30 albums, many of them on the famous Stomp Off label including the Paramount Jazz Band and his own Jimmy Mazzy & Friends.  In a New York Times review of Jimmy and Eli’s Stomp Off recording, Shake It Down, critic John S. Wilson wrote: “Mr. Mazzy sings with husky-voiced intensity and a sentimental enthusiasm that sometimes suggests a cross between Ted Lewis and Clancy Hayes. His banjo-playing is relaxed and flowing, providing light lines that help the tuba rise up and shuffle around.”

Drummer Jeff Guthery won the “fastest hands” division of the World’s Fastest Drummer competition at the Anaheim Winter NAMM Show in 2007. He has been playing drums for ten years and performed traditional and bebop jazz in Kyrgyzstan and South Korea for five years prior to coming to Boston, where he is currently a student at Berklee College of Music’s Percussion Department, majoring in Jazz Drum Set Performance.

Soon after moving to New York in 1963, trombonist Herb Gardner began touring with Wild Bill Davison, Kenny Davern and Dick Wellstood as well as becoming a regular at the Metropole, Jimmy Ryan’s and Eddie Condon’s nightclubs. During the ‘60s and ’70s, he appeared with virtually all of the classic jazz musicians in the New York City area such as Roy Eldridge, Gene Krupa, Henry “Red” Allen, Bobby Hackett, Jimmy Rushing, Doc Cheatham, Max Kaminsky and even Wingy Manone.

Barrington Stage Company and its Boyd-Quinson Mainstage is located at 30 Union St., in Pittsfield, Massachusetts 01201.Tickets at $45 and $35 are on sale now. Go to the Berkshire Edge Calendar or to  www.BarringtonStageCo.org or call 413-236-8888.