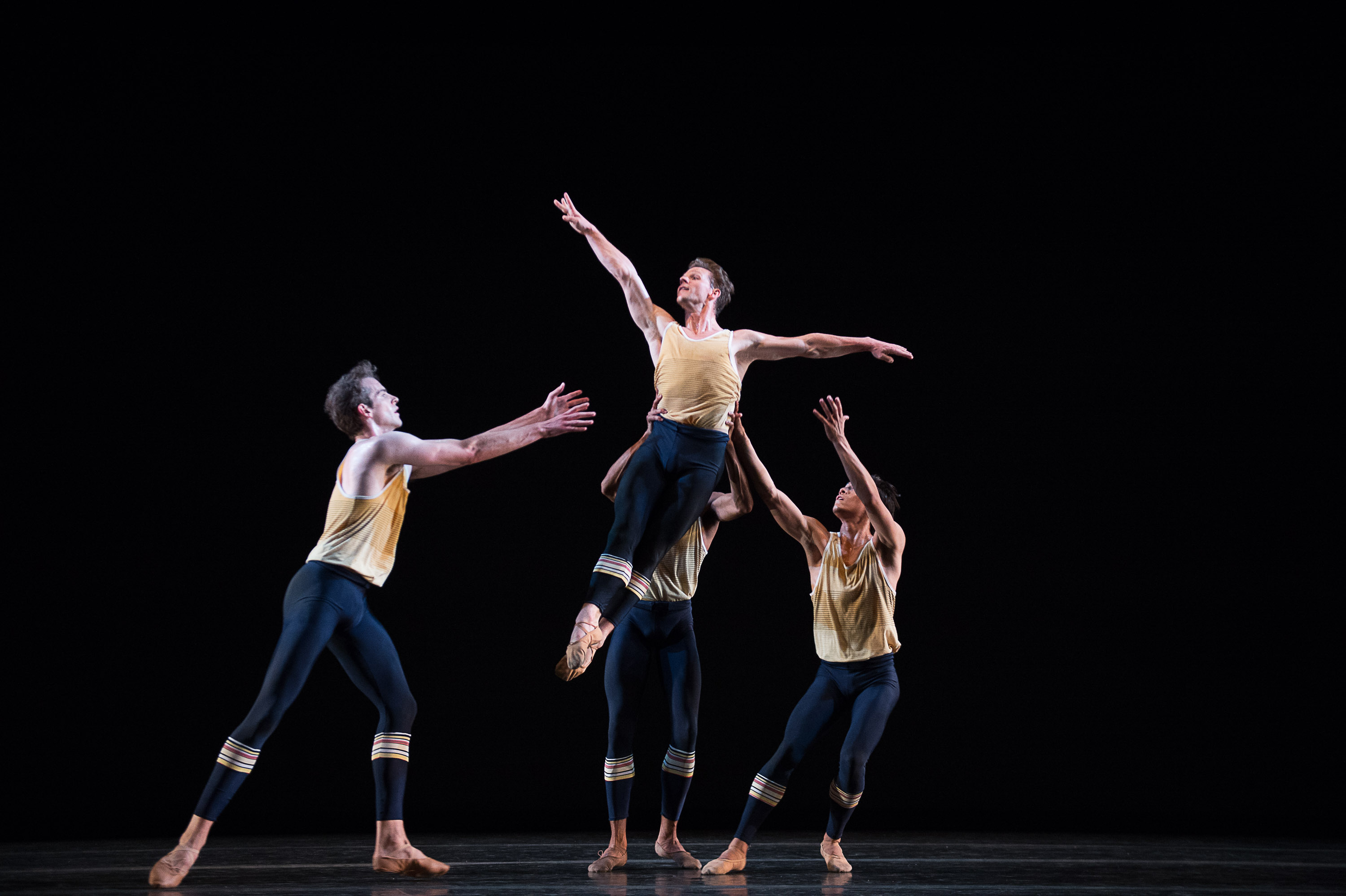 Becket — The fine pianists Susan Walters and Craig Baldwin, joined by the virtuoso violinist, Kurt Nikkanen, struggled against an out-of-tune, unvoiced upright piano as Daniel Ulbricht eleven ballet stars of American ballet soared in this afternoon show on August 2. Your reviewer’s anticipation was heightened by the retiring Jacob’s Pillow Executive and Artistic Director’s, Ella Baff’s opening remarks that live music would be “the cherry on top” of the performance by these selected dancers. Rather, it proved to be a mounting source of frustration as the instrument soured in the course of the performance, with several high notes sounding more thuds than melodies.

Notwithstanding, the dancing was nothing short of brilliant. To the music of Frederic Chopin in Jerome Robbins’s “In the Night,” Alexander Rosenblatt in Justin Peck’s “Distractions,” Arvo Part, in Christopher Wheeldon’s “After the Rain,” Franz Schubert in Justin Peck’s “Sea Change,” and Antonio Bazzini and a caprice by Henry Wieniawski, in Johan Kobborg’s Les Lutins (The Goblins), there was an unremitting honesty of expression, notwithstanding the magical leaps, effortless lifts, extraordinary acrobatics, and delicious sexuality.

A starlit sky served as apt background for “In the Night.” Three elegant and sensuous couples (Sterling Hyltin, Tyler Angle, Teresa Reichlen, Amar Ramascar, Rebecca Krohn and Jared Angle) graced the entire stage with lovely pas de deux that dissolved into individual explorations, romantically reuniting in the course of their dances. The three duets, however, also suggested three contrasting intimate relationships: one tentative, becoming rapturous; the second, elegantly formal, but with sudden bursts of passion; and last, stormy and passionate, with struggles of control, where a fiercely strong, loving woman ultimately kneels before her lover who raised her up to final equality. It seemed to ask, what’s a modern woman to do when confronted with the impulses of the night?

Daniel Ulbricht and Amar Ramasar twirled astoundingly and jumped to the sky in “Distractions” for four male dancers, while Jeffrey Cirio, a principal in the Boston Ballet, characterized as “fiercely masculine” in a Pointe Magazine review quoted in the program notes, displayed a panoply of emotions in subtle, even delicate, turns.

“After the Rain” was especially touching in its probing of the fraught relationship between Rebecca Krohn and Tyler Angle, whose magnetism and passion framed resistance, regret, and struggles for control. Exquisitely danced to Arvo Part’s allusive music, it was an intensely affecting if unresolved story.

“Sea Change” suggested different dynamics, focusing, perhaps, on the threat of infidelity for its two couples (Sara Adams, Sterling Hyltin, Jared Angle, and Russell Janzen). A reckoning with finality, if not death, was suggested by a brilliant metaphor, successive descents to prostrate position after charged and ambivalent — though beautiful — entanglements among them all.

A gorgeous entertainment, “The Goblins,” with a trio of dancers, Shelby Elsbree, Jeffrey Cirio, and Daniel Ulbricht, brought the sorry spinet piano to the front of the stage, with Craig Baldwin gamely facing the marvelous violinist, Kurt Nikkanen. You can get the picture (accompanied by a far better, baby grand instrument) in this delightful, brief Jacob’s Pillow promotional video:

There were competitive dares, responses, flips, and flirtations galore, among delightful bows of affections toward Nikkanen, who deserved every accolade. The concertmaster of the New York City Ballet Orchestra, he has a remarkable additional career as an international soloist and distinguished teacher. The final ovation was as much a tribute to him as to the fine dancers. Had only the piano been of service, it would have been a perfect afternoon of music and dance.