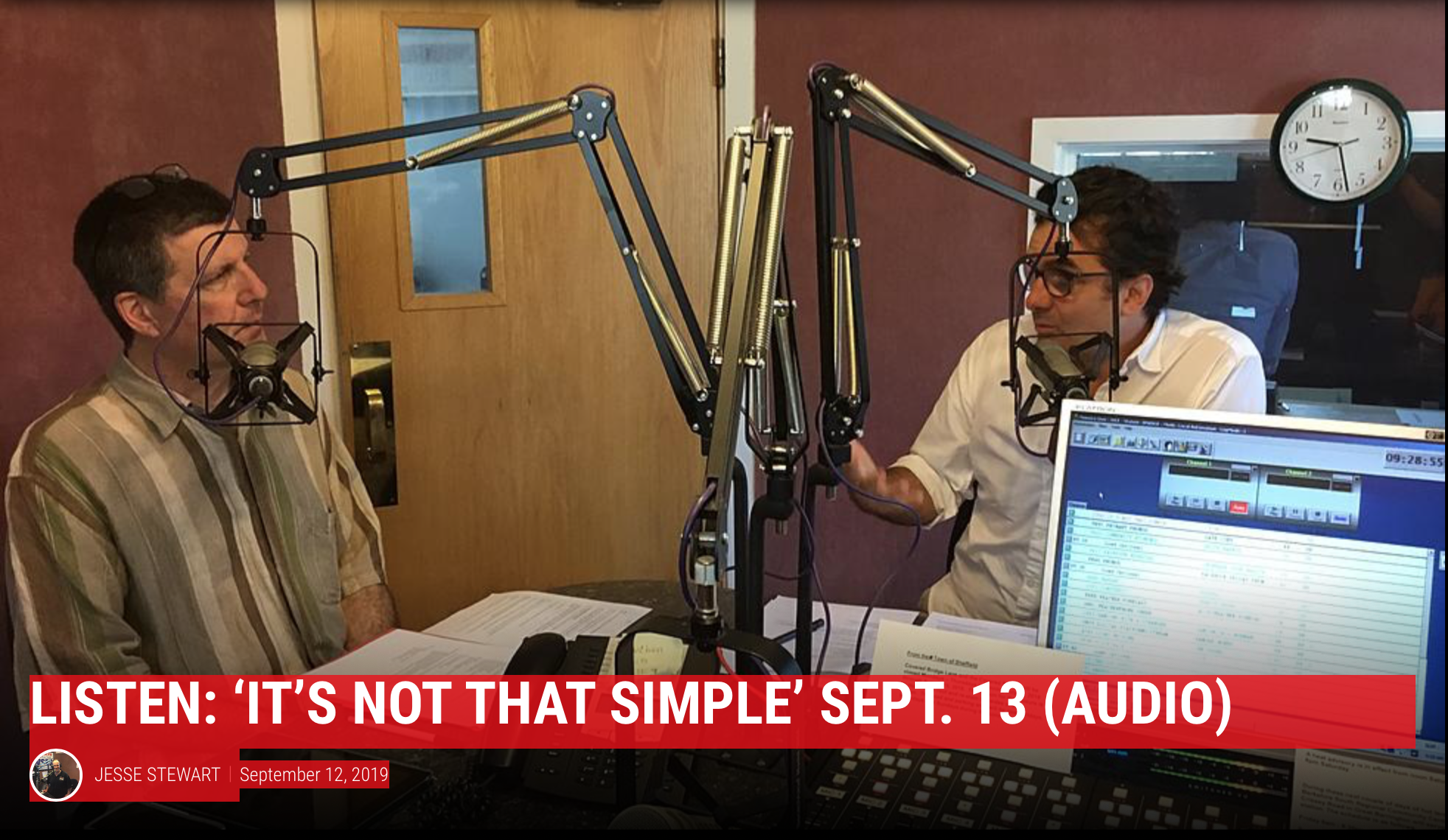 This column is a companion to the WSBS-AM radio show, “It’s Not That Simple.”  (Listen today at 9:05 a.m. or listen to the podcast here.) We look at issues facing Great Barrington and explore the question, “why don’t they just fix it?” We discuss the complexities, the competing interests, the less obvious costs or consequences, and the missing information that explains why It’s Not That Simple.

“What’s the matter with the Selectboard? How can they let this happen? Why did the Town do this?” Have you ever heard someone say that about the Selectboard or any other town board? We hear it all the time. Why don’t they lower our taxes? How can they allow that (hotel/airport/pot farm/solar field) to be there?

Just what power do our elected and appointed boards have? Maybe the board had no choice but to allow the use on that land. Maybe they didn’t have the authority or power to do anything else. What is the Selectboard allowed to do? What is the Town Manager allowed to do? Who sets the budget that drives up our taxes? It turns out, It’s Not That Simple.

We invited Town Moderator (and retired lawyer) Michael Wise back to the show to give us all a civics lesson. He started with the basics. We all know there are three branches of government: the legislative branch makes the laws, the executive branch applies the laws, and the judiciary decides disputes. We all know what that is at the federal level: Congress, the President, and the courts.

What about our local government? What is the legislative body? Who have we elected to represent us to make laws? No one. The legislative body in Great Barrington is everybody, meeting together in Town Meeting. No other body or board has the authority to make laws or spend money that hasn’t been approved by Town Meeting. Are our taxes too high? Blame Town Meeting. Does zoning allow your neighbor to build too close to the property line and ruin the view? Blame the ⅔ of the voters at Town Meeting who approved the zoning. We live in a hyper-democracy. No one represents us when it comes to making laws. We represent ourselves. That’s not complicated at all.

The local judicial branch is also straight forward, sort of. Great Barrington doesn’t have a local judicial body. We use the state courts for most judicial functions. However, the Zoning Board of Appeals (ZBA) and the Selectboard both function as a judiciary in limited situations. For example, the ZBA has the authority to decide appeals of the Building Inspector’s decisions. It’s their job to decide if the building code has been applied correctly.

So, there you have it.  Three branches of government, almost like you learned in school. But wait. Mike Wise had a surprise for us. A fourth branch of government: Administrative Agencies, or boards and commissions, which combine the functions of all three branches. These were originally invented to manage large projects like canals and bridges, but have spread throughout government. They are a hybrid of:

Legislative – They have some range of judgment in their decision making.

In America we have a number of examples of bringing experts in front of non-experts and letting the non-experts make the decisions. The United States has a civilian (the President) in charge of the military. Military decisions are ultimately made by an elected civilian, not by a general with years of experience. Legal guilt or innocence is decided by amateur juries or generalist judges, not by crime experts.

What does this mean for us here in GB? What are the elected and appointed boards allowed to do and what powers are not given to them? It’s messy. The boards are supposed to respond to the will of the people who set the bylaws at Town Meeting. There is some room for judgement, but between town meetings the boards don’t represent citizens, they represent decisions made at Town Meeting. Or, as Mike put it, “When applying the law to a particular circumstance, your guidance is the law.” If Town Meeting votes to ban plastic bags, and three months later 100 people show up at a Selectboard meeting asking the board not to implement the ban, the Selectboard has to follow the law. Those 100 people would need to go back to town meeting to change the law. The SB can’t change it.

But according to the town charter, the Selectboard shall “issue licenses and perform other quasi judicial functions” as provided by the general laws and the town of GB bylaws. The boards don’t have the authority to make laws, but they are required to make decisions which cast them as both executive and judiciary. Sometimes. See, it’s messy.

So if the Executive(ish) boards have discretion, or at least, blurry lines about what decisions they can make, who ultimately decides what decisions they are allowed to make? There is guidance in the law. Special Permits, for example, must be decided on six specific criteria. The board cannot be arbitrary, cannot say, “we don’t like this project so we will reject the permit.” They must say, for example, “the negative impact of the added traffic outweighs the positive economic benefit to the town,” and they must be able to justify how they came to that conclusion. But unlike a math equation, these decisions are often judgement calls. How much traffic is too much? These decisions can be, here’s that word again, messy. We can’t just take a ruler and measure. That’s why we have human beings making these decisions. If they were simple decisions, we wouldn’t need people to make them. “Does the law allow it or doesn’t it?” It’s Not (always) That Simple.

Ultimately, it’s the courts that get to say when a board has overstepped its authority. Anyone who doesn’t like a decision of a board can take the town to court. It rarely happens, whether because the boards are not usually arbitrary or because going to court is very expensive, but that is an option all citizens have.

We set out to define and clarify what are the roles and powers of different boards and officials and we didn’t make it any less murky than it was. We still want to know, “How can I have a say? Why are ‘they’ making bad decisions.” Especially when we don’t like what “the Town” is doing.

We have to start by asking who is “the Town,” and who are “they.” All the boards are made up of citizens, regular people, mostly volunteers. There are about 150 positions on various boards that run the town and there are always vacancies so any citizen can get involved. All of the authority given to the citizens who are serving on the boards is given to them by citizens who come to Town Meeting. Every registered voter is welcome, wanted at Town Meeting. Every decision that every board makes is made at an open meeting that any citizen may attend. Every meeting of every board includes an opportunity for any citizen to speak.

We live in a hyper-democracy where the power stays with all of us. We are all “they,” and we are all “the Town.”

Finally, you may remember that the last time Mike Wise was on our show it was to discuss ways to improve town meeting. He promised to hold a forum to discuss it and we promised to let you know when it is. Next Tuesday, Sept. 17 at town hall, come tell Mike your suggestions about how to improve Town Meeting. Ask him questions about how the process works and let him know what he can do better. He will gather your suggestions and bring them to the selectboard later this fall.

As always, we would love to hear your perspectives on this and any of the other topics we have covered. Please write us at NotThatSimple528@gmail.com or leave a comment below. We look forward to continuing the discussion.