This column is a companion to the WSBS-AM radio show, “It’s Not That Simple.”  (Listen to the podcast here )

If you can afford to live in Great Barrington, count your blessings. Many cannot. We have a housing affordability problem here and many, many residents of GB are housing cost burdened. Many of your friends and neighbors are struggling.

What is housing affordability and what qualifies as affordable housing?

Is there enough affordable housing here? How much is enough?

What does it mean to be housing cost burdened?

Who is housing cost burdened?

When affordable housing is built, who lives in it?

It’s Not That Simple. We invited two local housing experts to our show to answer these questions. Construct Inc. is a local organization that creates and provides quality affordable housing and support services to people who need housing. Jane Ralph is Construct’s Executive Director and June Wolfe is the Housing Director. 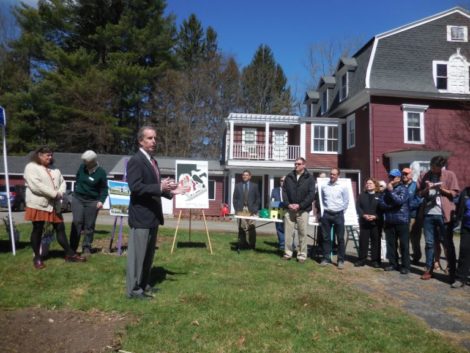 One of the problems is the quality and age of GB’s housing stock. Sixty percent of the housing in GB is over 60 years old, so it is not energy efficient or accessible. That exacerbates the problem in two ways. As our population ages, (and we are old and getting older here), we have more need of accessibility in our housing. So more housing becomes less suitable for the people who need it. The energy inefficiency of the older homes makes living in them more expensive to heat and maintain, making them less suitable for people with limited incomes.

We also have a very low vacancy rate. “The average vacancy rate across the country is 5 percent,” Ms. Wolfe continues. “The vacancy rate in Massachusetts is 3 percent. The vacancy rate in Great Barrington is…0 percent.” And while there are a number of organizations working on affordable housing, there isn’t nearly enough of it.

Here in GB in addition to Construct we have the Community Development Corporation of Southern Berkshire, Great Barrington Housing, and Berkshire Housing Community Development, to name a few. Still, with all of these terrific organizations offering housing assistance, Construct has a long waiting list for South County. “We have a list of over 700 people waiting for housing,” said Ms. Ralph. “We have a little over 80 units.” With a waiting list of 700 people for  80 units, the numbers just don’t add up.

Where did all the housing go? Why did it become so expensive? What is driving the affordable housing shortage in Great Barrington? One side of the equation is cost.

“Obviously one reason is supply and demand if you have a 0 percent vacancy rate. The other reason is landlord overhead,” Ms. Wolfe said. “It’s not cheap to be a landlord…and it’s not fun! There are a lot of landlords who quit and don’t want to do it anymore. So, that’s the cost side.” When demand exceeds supply, that drives up the price of housing.

But really, the problem is not the cost side,” Ms. Wolfe continued. “The problem is that wages are not keeping pace.”

Ms. Ralph added, “Most folks in our housing have good jobs, but it’s expensive to live here.”

Ms. Wolfe put the problem in perspective. “Someone calculated where in the country a person can work minimum wage and still afford a market rate apartment. The answer is, nowhere.” In this community, someone working a minimum wage job would have to work 80 hours a week to afford a market rate apartment. That’s a one bedroom apartment. For a two bedroom the same person would have to work 141 hours a week. Since there are only 168 hours in a week, that leaves 27 hours over 7 days to sleep, shop, and kiss your children.

Now that we have a good idea of what is available (or not) and how much it can cost in work hours, let’s dig into the methods that organizations like Construct use to determine who fits into their housing supply. The first step is determining what it means for housing to be affordable. “Here’s where I get wonky,” Ms. Wolfe continues. “Affordability is determined by the Area Median Income (AMI), published every year. It’s calculated based on fair market rents and the poverty index, and adjusted for family size.” Different housing subsidy programs are available for households, depending on what percent of the AMI their family income is.

Got that? Neither did we. So Ms. Wolfe gave us these AMI numbers for our community, calculated annually by the federal Housing and Urban Development (HUD).

Someone who makes 60 percent or less of the AMI qualifies for subsidized affordable housing. Who are they? Those who would potentially qualify for affordable housing are our friends and neighbors. A family of 4 earning $53,220 (60 percent), a pretty high wage for the region, would qualify. These are the bank teller you speak with twice a week or anyone working in retail or service. When we talk about workforce housing, generally 80 percent or more of AMI, we can add in administrators, firefighters, police officers, teachers, and nurses. This is the core of our community. “It’s most of the folks in Construct housing. Those are the careers that we see,” said Ms. Ralph.

One more time, and in human terms, in Berkshire County, of those making the Area Median Income, more than half are paying more than 30 percent of their incomes towards housing. Statistically, half of the people you know and interact with who live here are struggling with housing costs. Clearly, the Area Median Income, despite it being higher than the national average, is not enough for at least half of us live comfortably.

Here are a few more GB statistics to show that a lot of people here are struggling to pay their housing costs.

“That is also one of the reasons we are losing young people,” Ms. Wolfe says. Our guests call it the millennial valley. “We have young people until age 20. Then they tend to go away and they don’t come back until age 55. If you look at that on a graph it makes a valley.” That’s true for most of the towns of Berkshire County.

There is a double feedback loop happening. In addition to a place to live, young people want to live near other people their age. But they watch older siblings and friends moving away. There’s not a community of young people. So the decline is accelerated. Adding to the loop is the fact that those young people that move away are not having children here which explains the decline in school population.

The housing shortage and the cost of housing is playing a major role on the economy and the ability to maintain the basic infrastructure that communities need to thrive.

Now that we know a little bit about the economics of affordability, what exactly does ‘Affordable Housing’ mean? According to the state, it means someone would have to be earning 60 percent of Area Median Income or less to qualify for subsidies. That would be $53,220 for a household of 4.

Wait! Isn’t affordable housing the same as subsidized housing like we’ve seen in cities and funded through section 8 vouchers? “That is a very small percentage of what we are talking about here,” Ms. Ralph explains. “From our experience it is a very small part of the picture. Most of the need is from people in the careers that we’ve been talking about…Even those that are at 60 percent ($53,220) are still eligible for subsidy.” So, a firefighter can qualify for subsidy. A licensed practical nurse would qualify.

Another pressure is college debt which makes getting a mortgage impossible for many people who have well-paying jobs. People who once would have been homeowners are now paying too much in rent because they can’t get a mortgage.

“The problem will get worse if we do not try to address it because the more cost burdened you are, the harder it is to make ends meet,” Ms. Ralph concludes. “To end on a hopeful note, in Berkshire County we have an economy of scale that makes it so we can solve the problem if we want to. The great news is that this problem can be fixed at very little cost to the town. There’s a lot of federal funding, there’s state funding that can go into building quality housing. Drive by and look at Construct properties. They’re attractive. They’re quality. They’re energy efficient. They’re good stuff. It’s nice to live next door to, it’s not the nightmare…”

That’s all we had time to cover on our program this week. We will be doing a future show about solutions to the affordable housing problem and programs in the area that are addressing it.

We are on the air every two weeks and publish this column the Monday after our Friday show. We encourage you to click here to listen to the WSBS podcast of It’s Not That Simple for more details than we are able to cover in print.

Is there’s an issue you’d like to discuss on the show? Have comments about this or previous episodes? We invite your contribution of topics and concerns that may be of interest and that might seem simple to address. Maybe there IS an obvious solution we haven’t thought of, or maybe It’s Not That Simple.