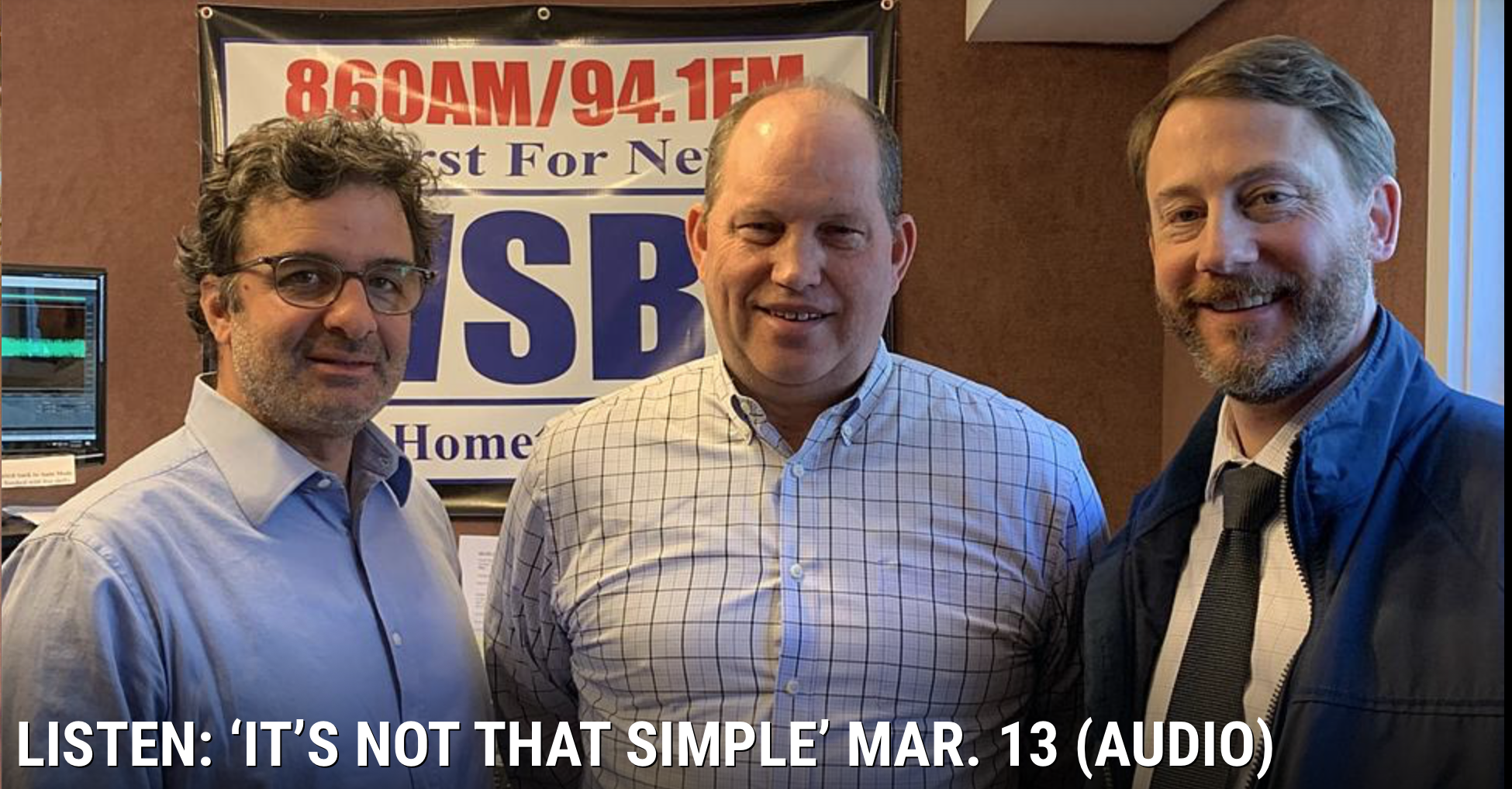 Join us as we look at issues facing Great Barrington and discuss the complexities, the competing interests, the less obvious costs or consequences, and the missing information that explains why It’s Not That Simple.

We both serve on elected boards in Great Barrington but we aren’t here representing those boards or the town. We try not to give opinions, but if we do, they are our own.

This column is a companion to the WSBS (860AM, 94.1FM) radio show, It’s Not That Simple on the air every other Friday at 9:05AM. Listen to the podcast here.

Ed Abrahams is seeking re-election to the Selectboard. Due to the Federal Communication Commission’s Equal Time rule, Ed will be off the air until after the Great Barrington Town Elections on June 30.

In Part 1 and Part 2  we interviewed Bryan Olson, Region 1 Director of the Superfund and Emergency Management Division of the EPA about the Rest of River agreement to remove PCBs from the Housatonic River. He spoke about the history of the cleanup fight and he answered technical questions about the safety and technology surrounding PCB removal and storage.

In the third and final part of our series we welcome Chris Rembold, Great Barrington Assistant Town Manager and Director of Community Development. We interviewed him on the March 13th program and asked him about the legal and political process, and about the benefits of the settlement.

It’s Not That Simple: Can you talk about how the settlement was reached. First of all, why did the towns decide to go into mediation?

It was pretty clear when the EAB [EPA’s internal Environmental Appeals Board] said to go back and reconsider the decision on whether or not to have a local dump, the writing was on the wall. We might lose and lose big on that. It was a winner take all situation. We could have ended up with all the waste, three local dumps, and we certainly would not have had any of the economic benefits or as much control in the process.

So the towns entered the mediation and said, “If there’s going to be a dump, we want to make it the most protective. We want community input into the process.” We wanted to be at the table fighting for the community. We also recognized that if we didn’t go into mediation and find a settlement we could be looking at a very, very long court battle. It would be incredibly expensive and a potential solution dictated by EPA Washington or by the Federal court or the Supreme Court. It could be a potential solution that nobody could live with.

INTS: Can the current settlement be modified?

INTS: Can you talk about the benefits to South County and for Great Barrington in particular?

CR: For the towns involved, there is more clean up. So, less PCBs will remain in the river. Future generations will be that much more protected. There is the possibility of significantly less truck traffic.

INTS: Because the selected landfill site is geographically close to 40 percent of the PCBs, and because the towns get to weigh in on how they are transported, an estimated 55,000 fewer truck trips will be required.

There are direct benefits in terms of money to the towns. Let me be clear, the towns did not go into the mediation to try and wring GE dry. This was not a question of getting a buyout or a sellout. This was a question of protecting human health and these benefits are in addition to that. The towns of Lee and Lenox, which are sharing the bulk of the clean up activity, are sharing the bulk of the financial settlement; about $25M each. Stockbridge, Great Barrington and Sheffield will get $1.5M each.

(See below for more information about benefits to South County and Great Barrington that weren’t in the 2016 permit.)

INTS: Many people would have liked for the selectboards to punish GE.

CR: Unfortunately, that’s not how it works. We could have tried to punish them in Federal court or all the way up to the Supreme Court. We would have had to go back to Town Meeting every year to ask for $100,000 to half-a-million in legal fees. That’s an untenable situation.

INTS: And we could have lost all of the benefits we’ve gained.

CR: In Great Barrington, specifically, we could have lost the site that GE owns that would have been a landfill. It will be donated to the town or a conservation partner for open space or other use. GE currently holds restrictions on the Rising Mill which makes it difficult to reuse and sell. Those restrictions will be released.

INTS: There were three dumps originally. Were the other two in Lee?

CR: There were two sites proposed in Lee. One was the site that was ultimately chosen. The third was on the west bank of Rising Pond in Great Barrington.

INTS: Why didn’t the public get a chance to vote on the settlement?

CR: Well, because it’s a legal fight, you can’t do something like that in public. It would hurt your negotiating position to go out and tell the opposing party what you are thinking. It doesn’t work very well when you do that. That’s why you do it in an executive session, in a confidential way. At the end of the day its basic Massachusetts Town Law that it is the Selectboard that has the authority and the power to settle lawsuits, whether it’s with a union or someone who trips and falls on the sidewalk. None of these settlements, none of these legal things come to Town Meeting. It’s settled by the Selectboard.

INTS: These are judicial rulings. They are not legislative.

CR: It’s not legislative. Town Meeting is a legislative body. The Selectboard is like a chief executive who has the power to settle lawsuits.

CR: Well, we’ll have to see what happens with the signed settlement. We can’t rest easy just yet. We hope there are not going to be any appeals. We hope EPA moves forward to issue a new permit based on the settlement agreement. Once every component of the permit comes out and the scope of work is issued, people should be able to comment. The Rest of River Committee, the five towns and I’m sure the City of Pittsfield as well, will continue to stay involved, looking at every scope of work, making sure that all of our considerations are included, and I know EPA wants to work with us on that.

BO: People have said, “Let’s just not do anything. Let’s wait on this.” I talked about the risk especially in the area from Pittsfield down into Woods Pond and the area around Woods Pond. There are huge amounts of PCBs in the river right there. Every day, if you stand on that Woods Pond dam, you can see the water going over. Every day there are PCBs moving further down into South County and into Connecticut, ultimately. We need to stop that sooner rather than later. The plans to put it from an uncontrolled situation where PCBs are, literally, going over the dam as we speak, to turn that around and put it in a safe place to be able monitor, we think that’s the right thing to do.

Benefits to South County that weren’t in the original permit:

Is there an issue you’d like to discuss on the show? Do you have comments about this or previous shows? We invite your suggestions of topics that may be of interest and that might seem simple to address. Maybe there IS an obvious solution we haven’t thought of, or maybe It’s Not That Simple.

Email your suggestions or questions to NotThatSimple528@gmail.com, or find us on Facebook.