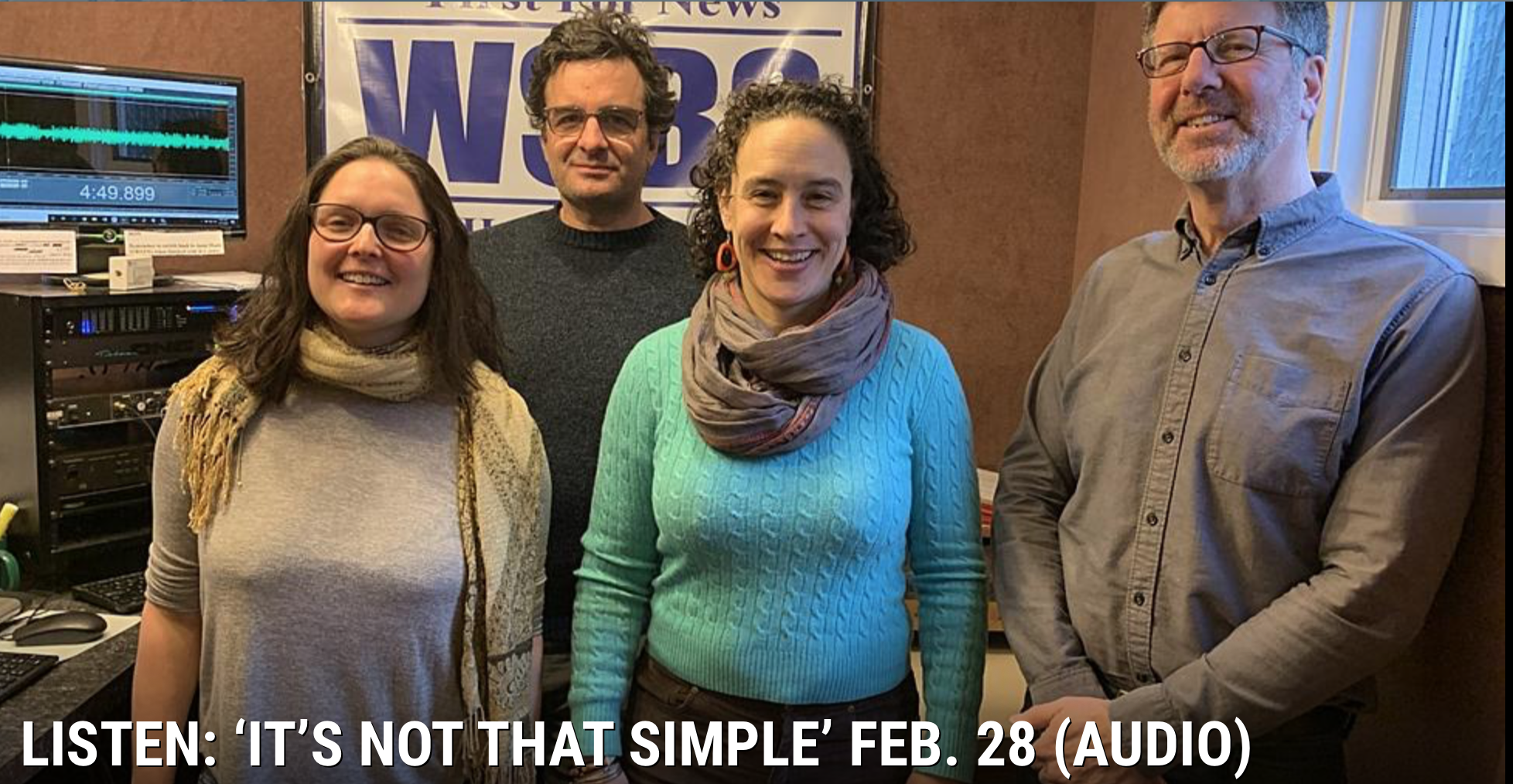 This column is a companion to the WSBS-AM radio show, “It’s Not That Simple.”  Listen to the podcast here.

Municipalities across the nation are on alert. Despite, or because of the Federal government’s reluctance, so far, to act on a climate that is increasingly proving to be changing, local governments are taking the lead. From prevention efforts, such as encouraging solar energy generation through zoning changes or reducing the carbon footprint of municipal buildings, to strategic planning to prepare for what now seems to be the inevitable consequences of climate change, cities and towns are leading.

Great Barrington is no exception. Our town has taken initiatives aimed at reducing its carbon emissions by monitoring and improving the efficiency of its buildings using a multi-year grant from the state. We have joined other state programs which promote and fund solar energy production and the Heat Smart Program, which helped citizens convert from less efficient oil powered heat and hot water heating to efficient heat pump systems. And we have recently signed onto an initiative called Municipal Vulnerability Preparedness to identify and prepare for the negative impacts of climate change.

In the winter of 2018 the Great Barrington Selectboard created the Strategic Sustainability and Livability Committee (SSLC) with a mandate “to research, recommend, and support implementation of sustainability initiatives that have the maximum impact on reducing the town’s greenhouse gas footprint, while improving resilience to the changing climate, and building community cohesion.” Read that again slowly, there’s a lot in that mission statement.

On this week’s show we invited Natalie Narotzky and Jovanina Pagano, chair and vice-chair respectively, of SSLC to tell us the what, when, and how of the work they have done so far.

Ms. Narotzky does sustainability work professionally. She works for the Urban Sustainability Directors Network, an organization that helps local governments think about sustainability and climate change. Ms. Narotzky has an M.S. in Climate Science and Policy from the Bard Center for Environmental Policy. Ms. Pagano is not a professional environmentalist. She is a social worker in Great Barrington who is “really concerned about the climate crisis and concerned about our relationship to the environment and ecology.”

Ms. Narotzky and Ms. Pagano have actually been working on environmental issues in Great Barrington for some time now. They were both instrumental in getting the town to sign onto the Heat Smart program described above. While working on that program they realized that there was no platform for the town to address sustainability issues in a broader way.

“When environmental issues came up in the town, there wasn’t a process for doing deeper strategic evaluation around some of these issues. For example, the plastic water bottle ban came up through the citizen petition [process]…and a lot of people put in a lot of time and energy,” said Ms. Narotzky. “And we thought, what if that time and energy were put into something else, thinking about these issues more strategically, wisely and intentionally. Environmental issues are Not That Simple.” So, they proposed to form a committee that looked at not only environmental impacts of issues having to do with sustainability but also to look at the effect those issues would have on human health and the economy.

“The long name was intentional,” added Ms. Pagano. “The word ‘sustainability’ can sometimes put people off. It does not describe what our intention was. More contemporary ways of defining sustainability involve thinking about the economy and local relationships in the community, and not just what we would call the ‘environment or nature.’ We wanted the name to let people know that we were thinking the environment, but we are also thinking about human issues like affordability.”

Is climate change coming and what are we doing about it?

The approach of the committee is to not be a place where climate change is debated, or even to discuss what can be done to prevent it. Climate change is here; it’s time to prepare to deal with it. “Talking about climate change as a fact or not a fact is a tremendous distraction from what is happening,” said Ms. Pagano. “I’ve stopped using the word ‘change’ and started using ‘crisis’ because that’s more accurate.”

Ms. Narotsky added, “There are two things our committee is thinking about. First, how do we reduce greenhouse gases that are causing climate change? The town has been doing quite a bit about that. But what we are going to talk about here is…climate change is happening, it’s here.” Higher temperatures, warmer winters, and increases in precipitation will have impacts on infrastructure and human health. The committee is looking at ways to prepare for these impacts and to mitigate human suffering (For a resource on what to expect with the changing climate, see the most recent report of the congressionally mandated  National Climate Assessment).

The committee got to work right away. “Because we are a new committee, our early efforts have been learning the town, who the key players in town are. We read the 2013 Master Plan before we formed the committee and the values of the town are in line with our mission,” Ms. Pagano said.

One project the committee took on was to evaluate the town’s Community Energy Aggregation which allows the town to negotiate with National Grid for lower electric rates, and the sources of the electricity, on behalf of all the ratepayers in town. “We were happy to take that on, research and make a recommendation to the Selectboard,” said Ms. Pagano. “The committee considered issues like whether the electricity would come from 100 percent renewables, whether or not it was going to be locally sourced, and how much it would cost. The committee has also made recommendations to the International Code Council which writes our building codes and they have followed up on a Town Meeting vote to switch all the lights in town to LEDs for which it will soon make a recommendation to the Selectboard.

However, possibly the most important action taken by the committee is its participation in the Municipal Vulnerability and Preparedness program (MVP). “This is a state supported program that encourages cities and towns in Massachusetts to begin the process of planning for resilience to climate change, making sure that our communities are safe based on the changes that we know are coming,” explained Ms. Narotzky. The program awards grants to plan and take action on measures related to climate change resilience.

The town’s planning department recruited SSLC to prepare a plan that identifies potential negative impacts of climate change and make recommendations for adaptation and preparedness. With the help of the Berkshire Regional Planning Commission a draft document is almost complete. If accepted by the state, it would make Great Barrington eligible for up to $2 million in funding for specific steps to increase resilience. Communities throughout the state have already been awarded grants to create “green” infrastructure, culvert improvements along river edges and dam removals.

As part of the program, SSLC organized a stakeholder workshop. “We invited town staff, members of local organizations, as well as concerned citizens,” explained Ms. Narotzky. Ms. Pagano added, “We wanted those who attended to represent our core mission of having as many parts of the community there…so there were different perspectives from the people thinking about the climate crisis.”

At the workshop they set up different stations where groups of participants could engage in topics related to climate change. At each station, each group learned about a different threat area: commercial and economic, environment, agriculture, housing, human wellness, public health, transportation, and many other areas. Then, small group brainstorming sessions were organized and potential action steps were identified which could be incorporated into the Resilience Plan.

The recommendations of the session were varied. For example, ‘resilience hubs’ were identified as places that could be fortified as refuge during a climate event like multiple days with temperatures above 90 degrees or flooding. Places such as the Senior Center and Berkshire South Regional Community Center were identified as places that people may go to, so those places would be recommended for upgrades to allow them to withstand the climate event and serve as a resource. Another example would be to plan for a backup water supply for each of the town’s water systems in case of contamination. It was determined to require minor infrastructural improvements, which were identified as another action which could be taken under the plan.

Sponsoring block parties was also brought up as a method for community members to get to know each other so that they can act as support resources for those around them who may need special attention under a climate emergency. “Before we can do any of these things, we need to create community cohesion,” Ms. Narotzky said. “You need to be able to check on your neighbors when the temperature hits 108 so you need to know who might need the help.”

The workshop informed the committee on issues it had not known about, such as pharmaceutical scarcity, infrastructure vulnerabilities and the need for basic human connections that are necessary in times of emergency. The SSLC has broadened its mission in a very short time and is actively exploring all aspects of the climate crisis so that the town is as prepared as it can be when and if these issues come to Great Barrington.

Coming up for the MVP program is a “Traveling Road Show” this spring. Committee members will present the results of the MVP workshop around Great Barrington, from farmers’ markets to the Senior Center, to Town Hall, to the schools, in order to continue the conversation about preparedness for climate change.

Anyone interested in the committee’s work or in being on the committee, can check their website or contact the Town Manager’s office. The committee is taking on the work that could one day affect all of us.

Is there an issue you’d like to discuss on the show? Do you have comments about this or previous episodes? We invite your contribution of topics and concerns that may be of interest and that might seem simple to address. Maybe there IS an obvious solution we haven’t thought of, or maybe It’s Not That Simple.

Email your suggestions or questions to NotThatSimple528@gmail.com, or find us on Facebook. Next Show: March 13th, at 9:05 on WSBS, 860AM, 94.1FM, Your Hometown Station.

Ed Abrahams is seeking reelection to the Selectboard. Due to the Federal Communication Commission’s Equal Time rule, this will be his last show until after the Great Barrington Town Elections on May 12.