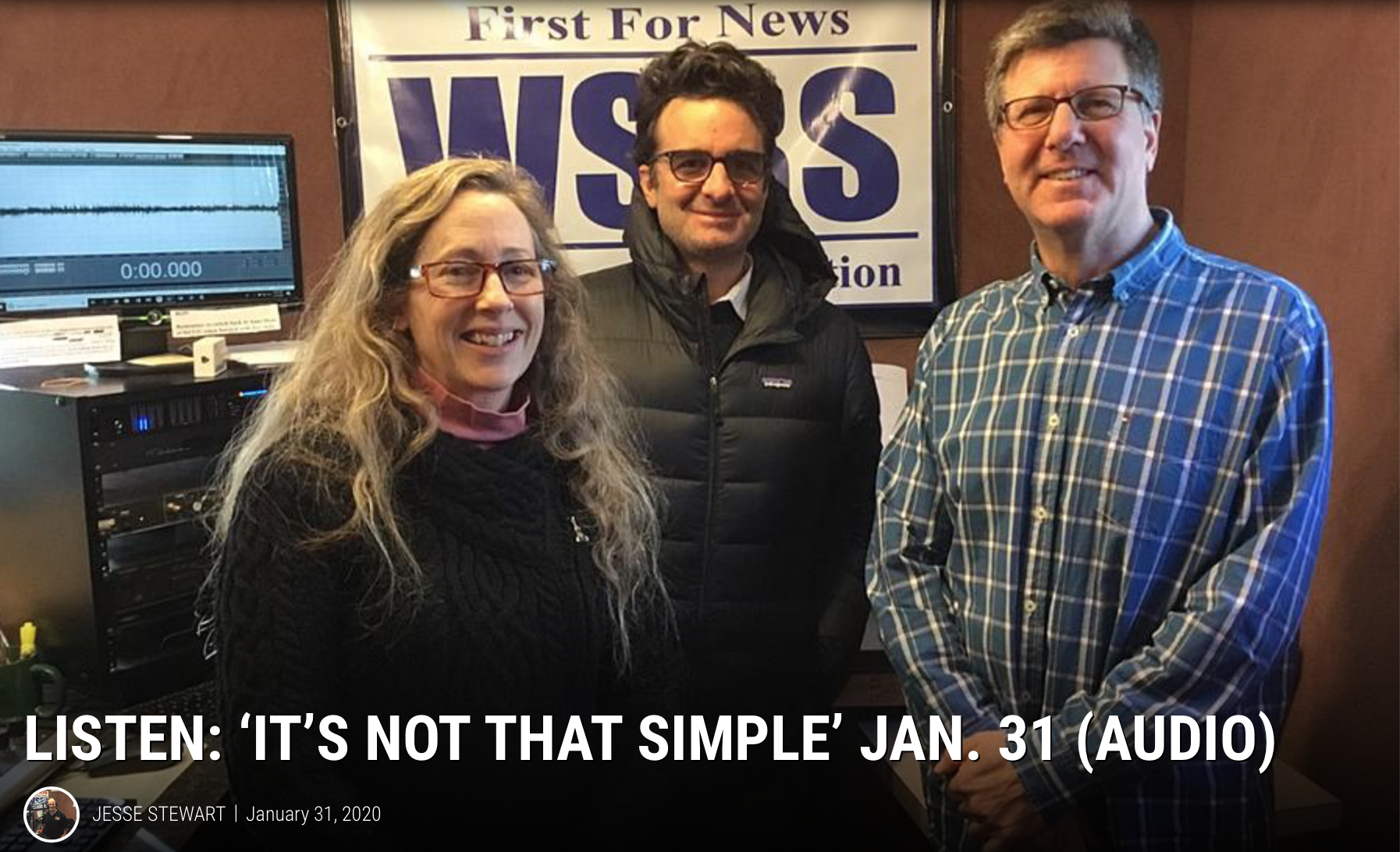 This column is a companion to the WSBS-AM radio show, “It’s Not That Simple.”  (Listen to the podcast here.)

We received this comment from a listener after our previous program on affordable housing. Edited here for length and privacy.

“I think affordable housing is a term to be used separate from workforce housing. I’m talking about real affordable housing for people who are not police officers or nurses or social workers…I’m not criticizing the show, but no one said, ‘Let’s go out and educate folks about low income housing’ …we still need to address the folks making $35k or less, they need housing too and they are not slobs.”

On our last show we presented the people and the numbers that make up the affordable housing matrix. Our listener felt that we were focusing too much on what is known as “workforce housing” and not concentrating on those most in need.

Let’s begin with a quick review. First, just what do we mean when we say “affordable housing?” After that, we can look at who qualifies for it and who is living in it. It turns out, It’s Not That Simple. To begin with, affordable housing means two different things, so there’s a terminology issue.

Traditional guidelines say our household budgets should limit housing and utility costs to 30 percent. That means if our family income is $3,000/month ($36,000/year), our rent/heat/electric should be no more than $1000/month. If we are spending that much or less, our housing is affordable. Anything more and we are “housing cost burdened.”

But “Affordable Housing” is also a specific term used by state and federal agencies that subsidize the construction of housing. When they say Affordable Housing, they are talking about housing that must be made available to people making a specific dollar amount of income, for a specific family size, in a specific area, or Area Median Income (AMI). They insist that their housing be rented to people making 60 percent or less of Area Median Income. In South County it is:

There’s more. Sixty percent of AMI is the maximum income requirement for government assisted housing. As we said in our last program, people in this income bracket are employed as teachers, nurses, etc. But a renter has to be able to afford an apartment or house, so there’s a minimum income as well. That’s where the first definition of affordable housing comes in. If affordable housing also means no more than 30 percent there housing for very low-income workers, the disabled, ill, or unemployed? That’s what our listener is asking.

Once again we invited June Wolfe, Housing Director at Construct Inc., an organization, “…committed to Affordable Housing for everyone and providing the support needed to achieve it in the southern Berkshire region.”  Construct has been around for over 50 years and began in the basement of the Clinton AME Zion Church on Elm Court in response to a call from Martin Luther King Jr. to address poverty. Since then they have grown to focus on many aspects of housing including shelters, transitional housing, congregate housing, and permanent housing, which Ms. Wolfe describes as a misnomer. “We call it permanent housing, but our goal is to provide housing for those in need and move them on when they get to the point where they don’t need it anymore.” Many tenants move out of Construct housing into home ownership because they are able to start saving money when they are in housing they can afford.

There are also very few total units. Construct has a total of 80 units in South County with a waiting list of 700. And since specific units are tied to specific income levels, it can be very difficult for people at the lower end.

Also left out are those who make above the 60 percent threshold, but who cannot afford a market rate rental. This is what the term “workforce housing” describes which is sometimes referred to as the “missing middle” of the housing stock and is usually associated with young people entering the workforce, professionals whose salaries do not reach AMI levels, and seniors on fixed incomes, to name a few.

Even those who qualify could be left out. “Someone applied this term “workforce” to describe those people,” Ms. Wolfe continues. “But that does not mean that people below 60% are not working. They are working! They are working hard and are usually working more than one job.”

Those who do qualify for affordable housing are facing another problem when being matched to an apartment. Aside from the maximum income requirements, administrators such as Construct will not place a person or a family in a unit that requires more than 30% of their income to sustain. “An apartment complex is a business,” explains Ms. Wolfe. “It has to pay its expenses.” So they cannot afford to be in the position of having tenants who don’t pay rent, and they don’t want to have to evict people who can’t afford the rent. “[There] are the units we try to get a subsidy for and we can get people in at 30% or as low as 10 percent of AMI. But we cannot get in people that do not have any income at all.”

We have been talking about housing that is affordable, partly because construction costs are paid by various state and federal programs. There is also a system of subsidizing individual tenants to help them pay rent. These subsidies make up the difference between what a landlord needs to maintain an apartment or house, and what a tenant can afford to pay.

Affordable Housing – Rental housing for those earning at or below 60 percent of AMI or home ownership for those at or below 80 percent AMI. Most people eligible for this housing are in the workforce.

Workforce Housing – This is not an official term used by state or federal programs. “It came about to identify a gap,” Ms. Wolfe said. “It identifies working people making between 60 and 120 percent of area median income who still can’t afford [market rate] housing.”

Subsidized Housing – A subsidy given to the landlord for a specific unit or to a tenant, to make up the difference between 30 percent of the tenant’s income and the actual rent.

Public Housing – A term left over from the 1930s usually referring to tenements, slums, “projects” and low-income housing. America has been trying to solve its housing problem since the industrial revolution. Many of the initial failed attempts stigmatized poverty. Ms. Wolfe explained: “It’s great that this show is called It’s Not That Simple because they used to build housing and put all the poor people in one place. We know that didn’t work out. This struggle with housing has been a problem with institutional racism, it ties into healthcare…it creeps into a lot of issues.”

Affordable housing programs now encourage a variety of income groups living together, with a mix of physical abilities and ages as well. “Even though we have gotten very smart about the way we create affordable housing now, the stigma still adheres,” said Wolfe.

Section 8 – A specific, federally-funded voucher program which is an example of subsidized housing, defined above.

So, problem solved, right? Those in need of housing assistance who can’t afford one of the 60 percent AMI apartments can apply for and get a subsidy. Well, It’s Not That Simple. Only 25 percent of those who apply actually get a voucher. The determination is based on 21 different priority categories, such as the chronic homelessness or victims of domestic violence, and meeting the criteria does not guarantee assistance. There are a limited number of vouchers and little turnover, so the waiting list is long. That leaves 75 percent of people making less than 60 percent AMI and who may be in extreme hardship, out of luck.

Ms. Wolfe told the story of a Construct tenant. “…(a woman) first applied when she was expecting a child. We were able to house her, not with a Section 8 voucher, but with a different program, when the child was about to graduate high school.”

As we have said many times, most of the people seeking housing assistance are, or were recently employed. Car accidents, illness, job loss, domestic violence, any of these temporary disruptions to income can lead to crisis. But most often it is as simple as wages not keeping up with the cost of housing. As we established in our previous program on this topic, minimum wage earners would have to work 80 hours a week to afford a market-rate one-bedroom apartment, leaving very little time for anything else, including sleep!

If there are not enough affordable housing units, and not enough subsidy vouchers, what happens to those who are eligible for affordable housing but cannot find an apartment or subsidy? “Around here, it’s an invisible problem,” said Ms. Wolfe. “In California people live in tents or on the sidewalk, but you don’t see that here. It’s too cold so people have to get very creative. They double up, couch surf. Young people move away. They camp. We have people that take a three season rental and try to stay in it. Some rent a vacation home in the off season when they can get it with a lesser rent and then move. This usually happens in April which is when we see a surge of applications… Sometimes people don’t make it. This week a man was found [dead] in a Beckett forest that was on our transitional housing wait list.”

We will end with our listener’s original question: What is available for people with very little money, often working people? The answer is: not enough. Affordable housing is being built by several area organizations, but not fast enough. Vouchers are available, but not enough of them.

We have spent two shows discussing the problem and the attempts by government and nonprofits to solve the problem. But more is obviously needed.

Forty years ago a full-time job would provide enough to pay for housing. Now someone can be working full-time or even more and still not be able to afford a place to live despite millions of government dollars spent to create and maintain affordable housing. The problem is systemic.

Perhaps it’s time to consider the other side of the equation and address the housing problem by looking at income inequality rather than seeing it just as a scarcity issue. What do you think?  We want to hear from you.

Is there an issue you’d like to discuss on the show? Have comments about this or previous episodes? We invite your contribution of topics and concerns that may be of interest and that might seem simple to address. Maybe there IS an obvious solution we haven’t thought of, or maybe It’s Not That Simple.

Email your suggestions or questions to NotThatSimple528@gmail.com, or find us at Facebook.