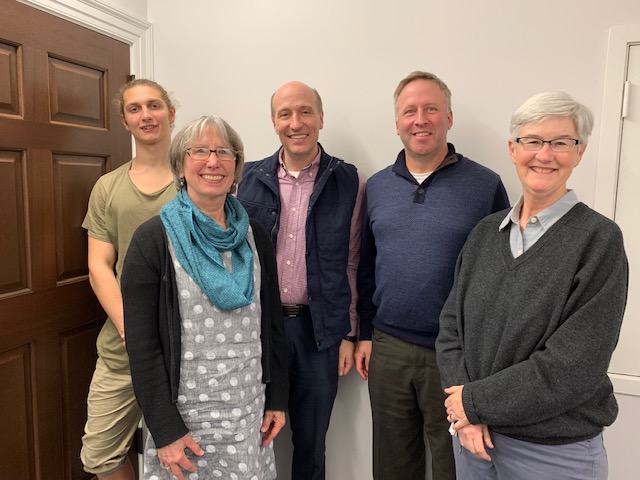 Readers of the New York Times’ recent half-century investigation of school shootings might have noticed an omission: the 1992 shooting at our own Simon’s Rock, which killed teacher Nacunan Saez and student Galen Gibson, and injured several others. The perpetrator of that crime is serving a life sentence with no possibility of parole. On closer inspection, it became clear the Times only included K-12 schools in its study. How fully, I wondered, would its number of shooting location dots proliferate in the blank space across the United States if it had included college campuses?

One local group of about a dozen people has started a conversation about guns by learning how not to interrupt each other. The Berkshire Conversation Project was convened in the wake of the Stoneman Douglas High School shooting in Parkland, Florida. I recently met with the core membership: Rev. Brent Damrow, pastor of the First Congregational Church of Stockbridge; Monument Mountain Regional High School Principal Doug Wine; First Congregational Church of Stockbridge member Terry Wise; Berkshire Waldorf High School junior Cora Rydingsword; MMRHS junior Leo Rosen-Baier; and Construct Inc. executive director Jane Ralph.

Valentine’s Day 2018 was the day of shooting. The following Sunday was Ash Wednesday, the holy day when, as Damrow put it, Christians, “look at the fullness of the human condition.” He put out an invitation to his congregation: “I asked, ‘Are we called to respond? And if so, what do we do? The answers were ‘yes,’ and then, ‘let’s figure something out.’”

Brent Damrow: We decided our first meeting would be in the Stockbridge Library, to broaden it to a community response. I’ll be honest, the idea of “dialogue” was not even the third, fourth, fifth or sixth idea raised. We met every other week …

Terry Wise: … from the end of February until the training in September. We did a lot of brainstorming in the first meeting about who should be included in order to get a diverse range of community members in leadership positions.

BD: We came across a company in Cambridge called Essential Partners. They work on training communities to have conversations around difficult topics. Then we started reaching out with “Who needs to be in this?” Leo’s grandmother was a part of the original group from our church, and he got pulled in that way. If the dialogues are going to be authentically community-based, how do we make sure the facilitators come from that community? We reached out to the three schools—Waldorf, Berkshire Hills and Simon’s Rock. Then we thought of organizations, and Construct came to mind.

TW: Beyond this group, there’s our support team of about six or seven people.

BD: Four or five people from the church.

Doug Wine: When Brent sent the word out, I thought, well school shootings often occur at high schools, so the high school principal should be here.

TW: You [Brent] also actively pursued members of the Stockbridge Sportsmen’s Club, as people who are part of an organization that uses guns for sport and would be likely to support access to guns. We wanted the conversation to be among a broad range of opinions, not just everyone agreeing with one another.

BD: I’d say both timing and trust. Within the Sportsmen’s Club community, there were a number of people who were really excited about it, but it was a timing issue for them. Also, I think they are interested in these conversations, but haven’t experienced conversations that didn’t devolve into something where they felt attacked.

This [dialogue] model presumes that bringing people together to share stories makes the issue one that we can talk about from a place of personal engagement rather than political soundbites. Essential Partners helped us to come up with the questions that avoided pitfalls and showed us how to make these things applicable to Berkshire County. They gifted us with the structure to make this happen.

Leo Rosen-Baier: The goal is to get people from different sides of the political spectrum talking to each other.

Once the group members had been trained by Essential Partners in how to facilitate groups using the dialogue model, three dialogues were held, from the end of March through the later part of April. Each session ran an hour and a half, with participants going their separate ways immediately after on the first night, lingering a bit more the second and lingering longer after the final one. “They were kicking us out of Berkshire South,” Damrow said. The conversations were structured around questions as prompts, and guided using nonviolent, “I-statements” rather than with participants stating opinions or reacting to what had been said before them.

Sheela Clary: But this is not a beehive of gun activity or a place of mass shootings, and Massachusetts has very strict gun laws.

JR: Why here, why now? There have been threats of violence in the schools.

LRB: … and there has been gun violence in this area. I know this year of one murder suicide, and I have a friend at school who’s been shot—shot three or four times in the leg; it happened in Pittsfield.

TW: We had one dialogue participant whose grandfather was shot and killed in a road rage incident. The person behind the grandfather thought he was going too slow and got angry and somehow cornered him and shot him.

Cora Rydingsword: One guy in our group, he worked in a school in New York and there was a shooting and he lost friends.

DW: And someone in our group had left Simon’s Rock two or three years before the shooting there [in 1992, when a teacher and a student were killed, and several other injured.] He still felt very personally connected to it.

On the third day, we asked the question, “How did this meet or exceed your expectations?” and we had two gunowners, one of whom said, “I figured I was being set up. This is not what I expected. I thought I’d be brought in and blamed for all the ills of the world. To have people ask me questions about being a gun owner, and how it works, how I keep things safe …”

JR: … and how are we a community if we can’t express these differences?

CR: I participated in two dialogues before. At my school we do one with Clark University about climate change, and so I’ve attended two of those and, from there, I was asked by my headmaster to join this group. The thing that fascinates me most is how people learn to listen to and respect the other opinion in dialogues. Through being a participant, I learned there were a lot of people in our group who never spoke up in class or shared their opinions. But through the dialogue process, it makes it easier to share because you feel completely safe.

SC: What is different about the “dialogue” from other conversations?

DW: One thing that happened in the group I facilitated is you begin and everyone speaks. Then you ask another question and everyone speaks, as opposed to as soon as you finish I’m ready to jump on it. I don’t. I take notes. I may go back to something Jane said 15 minutes ago. It’s a much more thoughtful conversation. I’m not responding, I’m thinking and listening.

JR: It would be inappropriate for me to say, “I agree with what Brent said.” You have to have your words stand on their own. People were there with each other but without getting on a bandwagon.

JR: Notice how now we’re talking too much and the high school students aren’t—that wouldn’t have happened then.

BD: And there is an opportunity to request more information, as in, “Jane, I was really intrigued by what you said, can you talk more about that?” Seeking clarification—it invites the storytelling to go deeper. It is generative but protects people.

One proposal came from a participant who felt that guns have no rightful place in the world. He suggested a gun library, where no one would own guns as private property, but could take them out whenever they wanted for recreational or hunting purposes.

CR: There were some people who wanted only rifles, some who wanted none at all, others who said “ban automatics.”

DW: The gunowners in our group despised the NRA, which surprised us.

JR: We were able to dispel some misperceptions, like anybody can get a gun and do whatever they want with it. The folks were like, “No, actually, I had to do this and this, and this is how I take care of it.” For some people I think the concept of responsible gun ownership was beyond their imagination.

BD: One young man who came in with a certain perspective on firearms is learning how to get a hunting license and went on a two-hour hike with one of the people from his table, someone who’s been an active hunter all his life.

JR: People told us, “I’ve never felt listened to like this before. People don’t interrupt me.”

CR: One guy went back to where he’s from over spring break down south and tried to have conversations with his friends down there about this, and he couldn’t. He tried so hard but the people there weren’t hearing him out about what the opinions from up here were, not his own opinions. He was like, “If you guys were there, we could have done it.”

For more information about the group and how you might get involved working on next steps, contact Brent Damrow at bdamrow@stockbridgeucc.org.