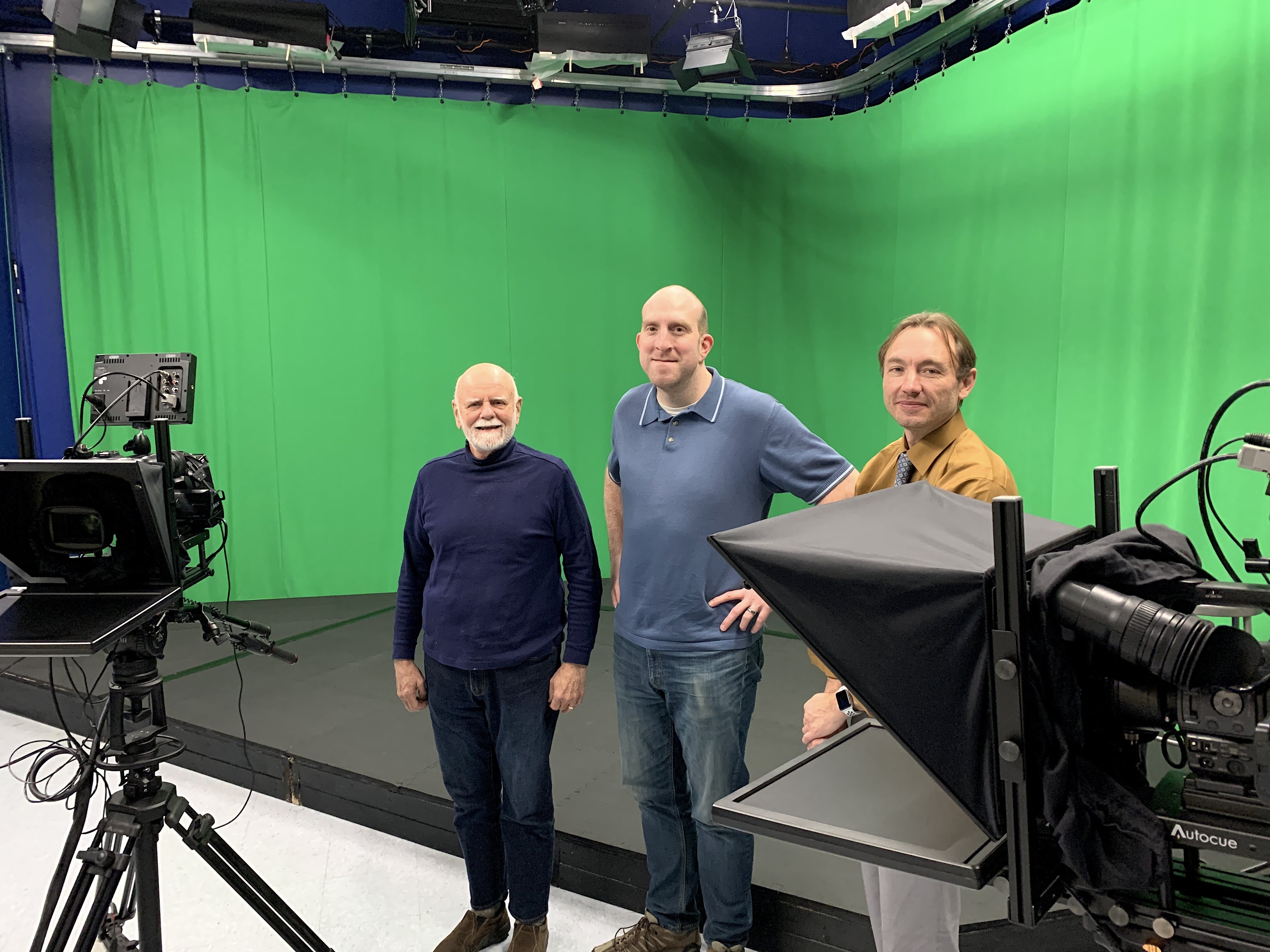 In the face of the loss of funding by the Republican-controlled FCC, Community Television of the Southern Berkshires in Lee is seeking to rename itself and become a somewhat different organization. From left, board president Will Ryan, operations manager Nate Haney and executive director Rich Frederick. Photo: Terry Cowgill

Lee — Change is in the air in the television business. The business model of the cable industry is threatened by cord-cutters and the funding of local cable access channels is imperiled because of a recent ruling by the Federal Communications Commission.

So many cable companies and local public, educational and governmental (PEG) channels are in the process of reinventing themselves lest they go the way of the video cassette recorder.

Nowhere is that trend more evident than at Community Television for the Southern Berkshires in Lee, where officials at the nonprofit community television outlet have been brainstorming a plan to sustain operations in the event that its funding from the cable company is dramatically curtailed.

Longtime station manager Leo Mahoney is retiring and is being replaced by Richard Frederick, who held a similar position at the PEG in Dalton, and was a photojournalist at CNN and WNYT-TV in Albany.

That gave management and board members such as chair Will Ryan an opportunity to retool the station’s mission, its relationship with viewers and its way of doing business.

“We’ve got a super amount of change pending and we thought, what better time to reinvent?” Ryan asked rhetorically. “I think it’s healthy for any organization to do what I call ‘zero-based’ thinking and budgeting, taking it right down to the beginning and that’s what we’re doing.”

Looming over everything from funding to programming is a recent decision by the FCC to allow cable companies to, in effect, significantly reduce funding for the PEGs.

Under FCC rules, towns and cities nationwide are allowed to negotiate franchise agreements with cable television providers. Those municipalities can require in the agreements that the cable companies meet certain community needs such as setting aside channels for PEG channels. These needs are funded by a 5% franchise fee in the cable bill customers receive each month.

However, the FCC’s new rule permits cable companies to assign a value to these channels, deem them in-kind contributions and then subtract that amount, and the value they place on any other in-kind contributions, from the franchise fees the cable company pays the local community. Cable companies and their lobbyists claim the new rules will spur investment, especially for broadband internet to underserved areas.

In response to Edge inquiries, Charter has simply referred us to a 66-page comment posted on the proposed FCC rule changes by the Internet & Television Association, a trade organization representing cable companies and currently headed by former FCC Chairman Michael Powell.

These in-kind contributions could include free or reduced cable connections to town halls, backhaul of signals, interactive program guides, or perhaps channel spectrums allotted to the PEGs themselves, according to the northeast region of the Alliance for Community Media, a trade organization.

Despite pleas from Sen. Ed Markey, D-Massachusetts, 14 of his Senate colleagues and PEG advocates, the FCC, chaired by Trump appointee Ajit Pai, on Aug. 1 voted 3-2 along party lines to enact the new rules.

State Sen. Adam Hinds, D-Pittsfield, also weighed in with a letter opposing the move. There are several lawsuits that have been filed that challenge the rule change.

The Democrats on the FCC who voted against the rule change were nothing short of appalled. In a statement, Commissioner Jessica Rosenworcel noted that as the volume of local journalism has declined, the value of PEG channels to their communities has increased.

“We’ve heard from thousands of communities across the country worried we are cutting the operations of so many local channels,” Rosenworcel said. “I am saddened that this agency refuses to listen.”

Advocates of PEG channels, which broadcast citizen-generated television shows, school events and government meetings, say the ruling could be “devastating.” Adding to CTSB’s woes is the fact that Ryan and Frederick have no idea how much revenue they’re going to lose. Charter-Spectrum, the cable company for almost all of Berkshire County, won’t yet say how much value they will place on the in-kind contributions and CTSB officials won’t know until they receive their annual check from Charter in March.

“That’s the problem,” said Mahoney, the affable outgoing station manager. “It’s tough to do the budget guessing what your income is going to be for the next year.”

So Ryan, Frederick and Mahoney set about inventing a new model for the station, redefining its mission statement and making it even more valuable to approximately 15,000 subscribers in the five towns it serves: Lee, Lenox, Stockbridge, Great Barrington and Sheffield.

First is a name change. Many PEG channels have changed their names to reflect the full range of operations they perform. In addition to operating three channels on Charter-Spectrum cable, CTSB has a robust website with almost all of its programming available to stream on demand. The government channel actually streams live on the website.

“If we were BMC, people might start calling us for x-rays,” Frederick quipped, referring to the regional hospital in Pittsfield that uses the same acronym.

CTSB also offers training in video editing and production so that citizen programmers can learn the craft and self-produce. But Ryan said “that paradigm is not working so well” and there has been a decrease in those taking the classes, perhaps because they are concerned about the time commitment or intimidated by the technology.

In the future, CTSB staff will be restructured and more able to help citizen programmers with so-called “back-end” functions such as camera operation, lighting, video rendering and editing.

In addition, CTSB will extend its hours to include more evenings and perhaps even a full eight hours on Saturdays. Programmers who work during the day are typically hard-pressed to find the time to work in the studio. In addition, the website will be redesigned to be simpler and more user-friendly.

“So if you were afraid of shooting and editing, we can help,” Ryan said.

CTSB’s newest staff member, Nate Haney, will be an invaluable asset in helping programmers. Haney, a trained broadcaster, comes to CTSB after working for several years as a stage manager at ESPN.

“He’s a real asset in getting people the help they need,” Ryan said.

As for the finances, Ryan said things are fine for the time being. All but a tiny portion of the station’s budget, which is between $400,000 and $500,000, comes from cable company fees, which have not yet been affected by the FCC rule change. Click here to see CTSB’s most recently available IRS 990 form required of all nonprofits.

The concerns the cable companies have about so-called cord cutters who cancel the cable TV subscriptions in favor of a la carte streaming options also has CTSB worried since the 5% fee that funds its operations can only be charged to cable TV subscribers, not those who pay only for Charter’s internet service.

But Mahoney said revenues have actually risen slightly over the last two years because of an increase in part-time residents. They own seasonal homes and are typically wealthy, so they often purchase top-of-the-line cable packages. This benefits CTSB because the 5% fee is based on the total cable TV bill.

But the threat of losing the bulk of its funding has employees and board members concerned. So they are also exploring ways of making up for the potential losses, including private fundraising, memberships, corporate sponsored events and grants.

“We have the Sword of Damocles hanging over our head,” said Ryan.

Ryan said an announcement of the rebranding will likely occur in January. In addition, CTSB and The Edge will soon announce a partnership that includes a new program featuring Edge staff and members of Berkshire County’s creative community. Stay tuned.